Well, to be honest, it's not really much of a mystery -
except to the team responsible for the reprint editions of
the TALES Of SUSPENSE/IRON MAN adventures
from the early years of MARVEL.

If you're the proud possessor of the softcover printing of
MARVEL MASTERWORKS, the first OMNIBUS volume,
or even the ESSENTIALS edition of ol' Shellhead's early ad-
ventures, you'll have seen the b&w production stat of TOS
#42, misnumbered as #41 and toting the previous issue's
cover blurb. 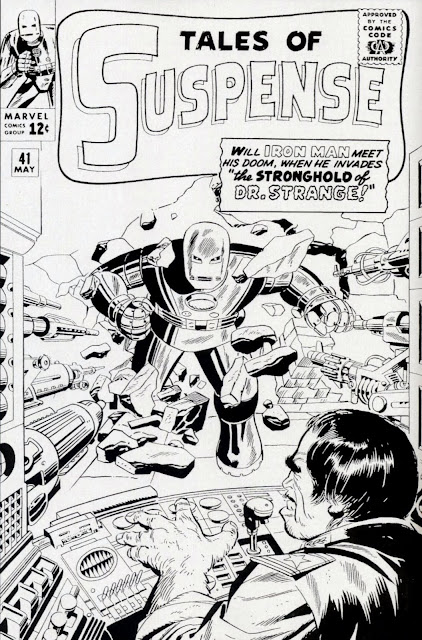 The books ponder how this 'boob' occurred and con-
sider possible explanations - including what I regard as
the most obvious one, making me wonder why anyone
thought it was such a mystery.  Let me elaborate.

Back when I freelanced for IPC/FLEETWAY, I
regularly visited the offices of KING'S REACH TOWER
and often saw pages of artwork with missing logos - some-
times removed cleanly, or simply cut or ripped off the page.
The logos were photo-mechanical-transfers (referred to as
PMTs - oh, behave missus) and were sharp, high-quality
images which reproduced well in the printed comics. 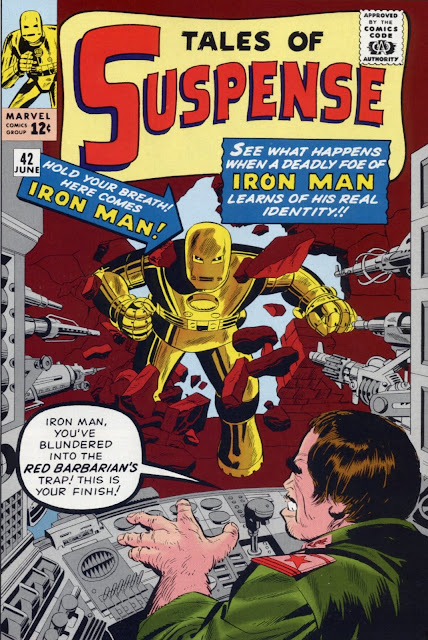 Occasionally, however, there might be none available
when required, with no time to wait while new ones were
printed.  So, as I said, a logo from an old page of artwork
was re-used on a new page - problem solved.

What obviously happened in Marvel's case was something
not too dissimilar.  They were fresh out of logos, so stuck a
copy from a b&w stat of the previous issue onto the cover art
for the next issue.  Duplicate stats of the cover would then be
made - one for the files and one to be sent for lettering.  (Once
that was done, a copy of the finished page would be made for
colouring.)  As Marvel has quite a number of cover file stats
which differ from the printed versions, I'm surprised as
to why anyone was puzzled by the matter.