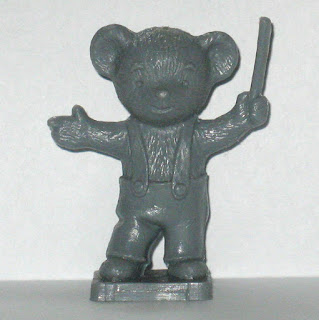 The very first SOOTY figure I ever had as a lad was a grey one, included as a free gift in a packet of KELLOGG'S cereal.  Today I received a replacement for it, and by that mysterious, magical, mystical method I've referred to before, it 'became' the actual item I had way back in the early '70s.  Don't ask me to explain how it works - it just does.  (In my mind anyway.)

We usually got Corn Flakes when I was a kid, occasionally Weetabix, and when there was a coveted free gift included, Sugar Smacks or Sugar Puffs.  (Which were the same thing in all but name, and even that was 50% the same.)  I've looked up the Sooty figures on the Internet and, apparently, they were giveaways with Coco Krispies in 1973.

This perplexes me somewhat, 'cos I don't remember ever getting Coco Krispies, but it's conceivable we did on that occasion because I wanted a Sooty.  But what about the year?  When I look at Sooty (and even in memory for decades), I see him in the house we lived in until June 1972, which would mean I had him for a few months before that at the very least.  I can see him in the living room, my bedroom, etc., and I find it hard to believe I didn't acquire him until 1973.

So Kellogg's collectors, could the 1973 date attributed to the Sooty line be for a reissue, or is my memory of having Sooty earlier than that simply a delusion, brought about by me associating him with earlier cereal characters (like CRATER CRITTERS or NEPTUNE & His SEA-BED SERENADERS) that I did have in my previous house?

If you will, do me a favour and rack your brains on my behalf.  Are Sooty and his pals (SWEEP, SOO [spelt SUE by Kellogg's], KIPPER, and BUTCH) definitely from 1973, or were they available before that, perhaps in another cereal?  I'm bewildered by how I could associate these figures for so many years with one particular house, if they weren't issued until sometime after we flitted from it.  Can you help?
Posted by Kid at Friday, August 23, 2019

I haven't commented for quite some time, but did a Google search for your Kellogg's Sooty collectable figurines and came up with this. http://cerealoffers.com/Kelloggs/Coco_Pops/1970s/Sooty_-_Friends_Models/sooty_-_friends_models.html .
I don't know if this helps, but you can check it out anyway.

Thanks for taking the time and trouble, JC, but that's one of the sites I'd already seen during my own Internet searches. Strangely, it says the figures came in six colours, but shows seven. Didn't hurt me to revisit it though, so thanks again.