I first enjoyed the amazing art of BRIAN LEWIS in the pages of SMASH! back in the mid-'60s, on a strip called CHARLIE'S CHOICE.  I didn't learn his name until many years later, when I discovered he was also extremely adept at illustrating all types of straight action/adventure strips.  Brian died in 1978 at the far too young age of only 49, and readers of comics were denied further examples of great art from this talented individual, whose career had begun in 1959 on LONE STAR.

He worked on various comics over the years, such as LION, TIGER, BOYS' WORLD, EAGLE, WHAM!, SMASH!, COR!!, TV21, COUNTDOWN, TV ACTION, LOOK-IN, The EAGLE, VAMPIRELLA, STARBURST, 2000 A.D., and many other publications.  He was also involved in animation, working on YELLOW SUBMARINE, as well as providing art for The MUPPET SHOW.  In 1982, QUALITY COMICS issued a HALLS Of HORROR Special, reprinting seven strips that Brian had drawn for them.

Here, then, is a quick jaunt through that Special, just to remind you of what a loss Brian's untimely demise was to comics and magazine publishing.  One of the greats, whose legend lives on to this very day, nearly 40 years after he laid down his pen and brush for the final time. 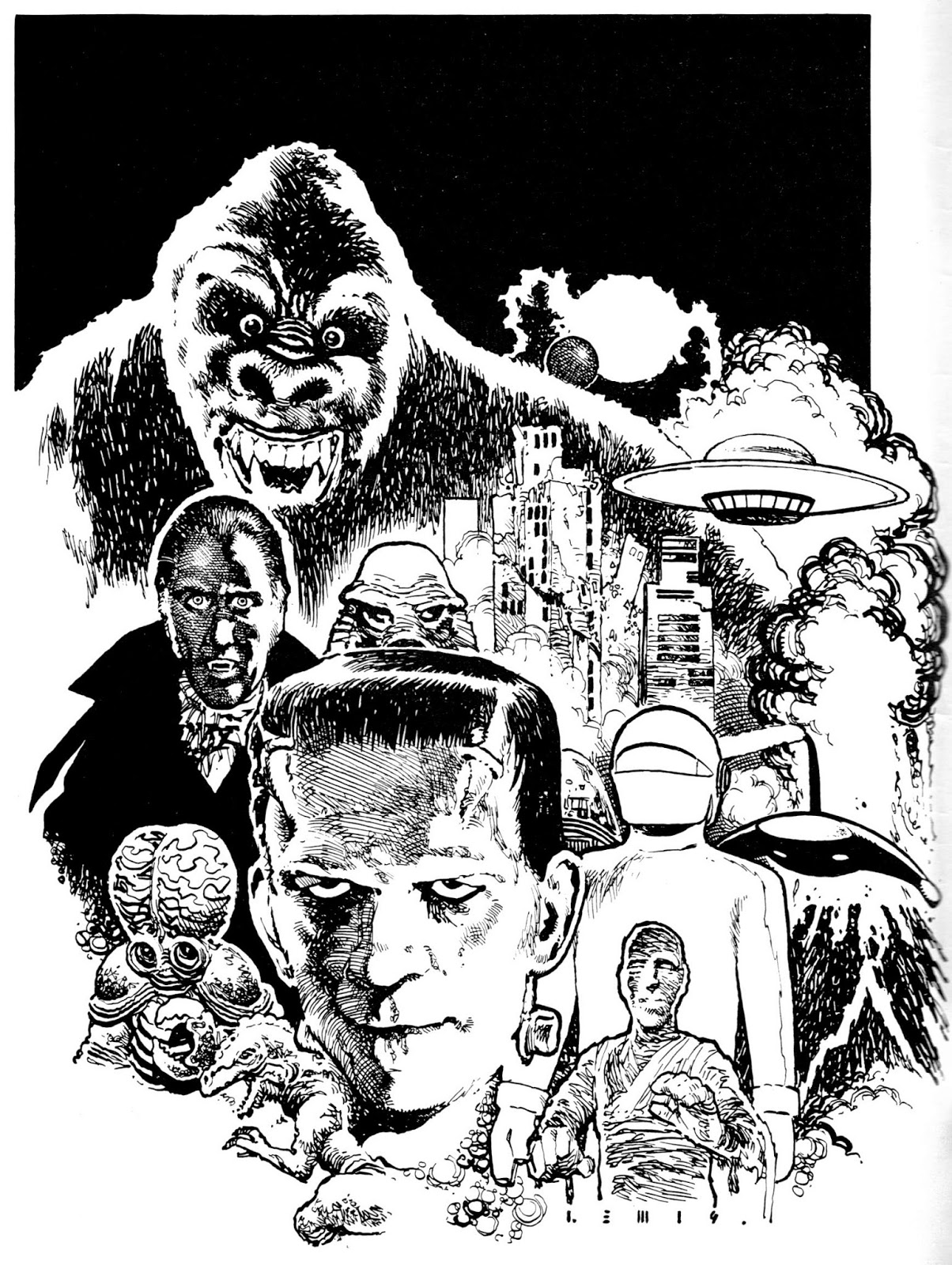 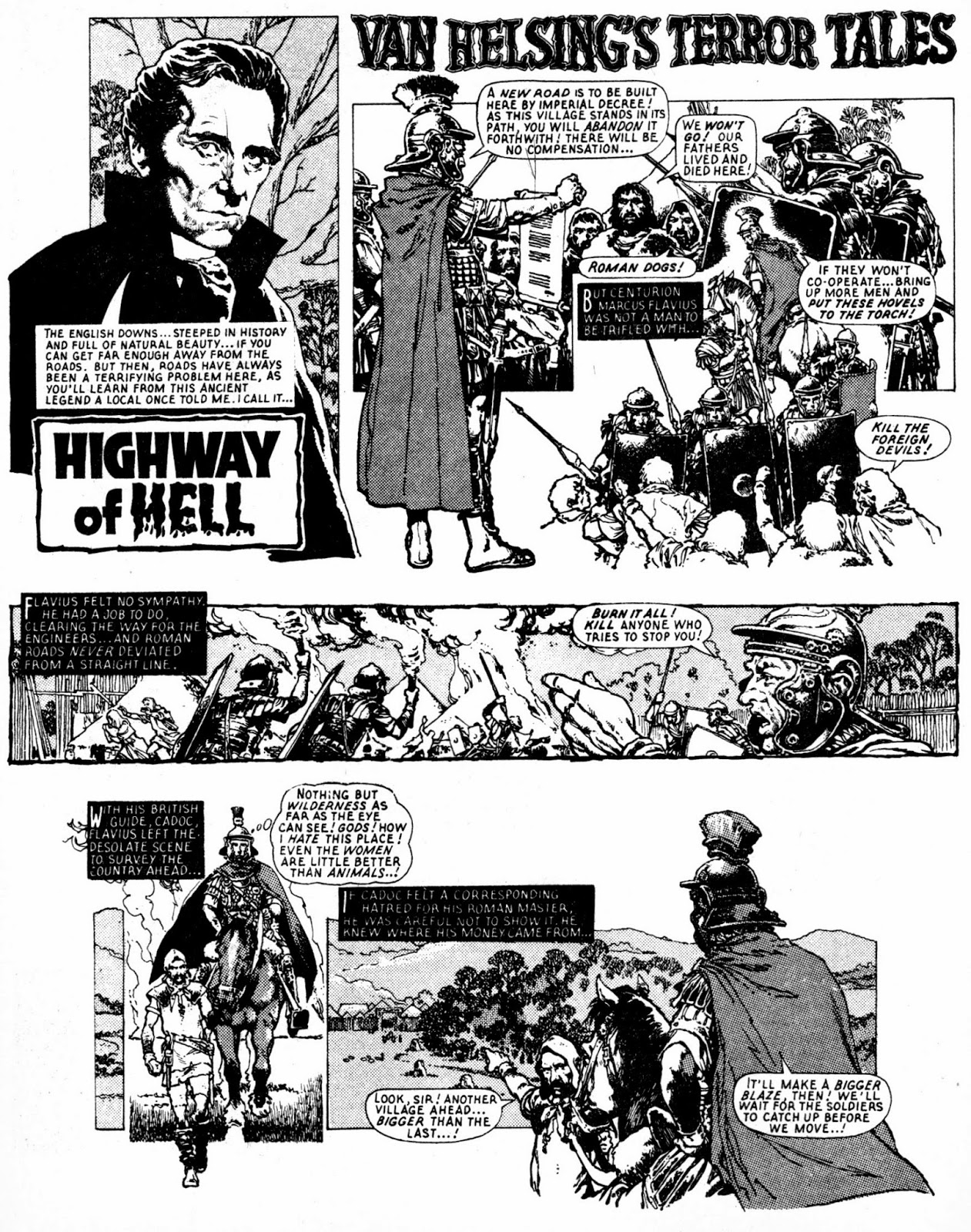 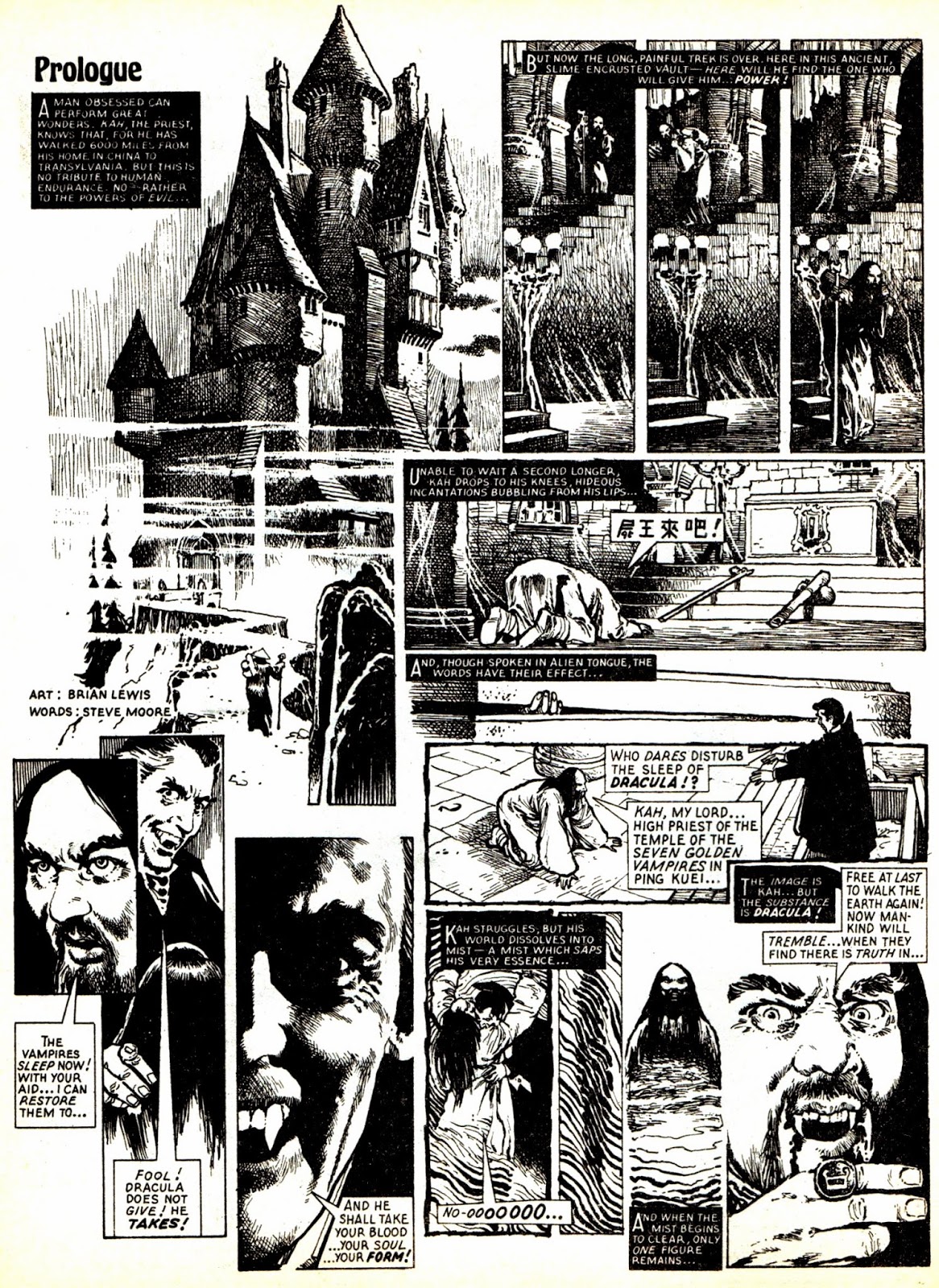 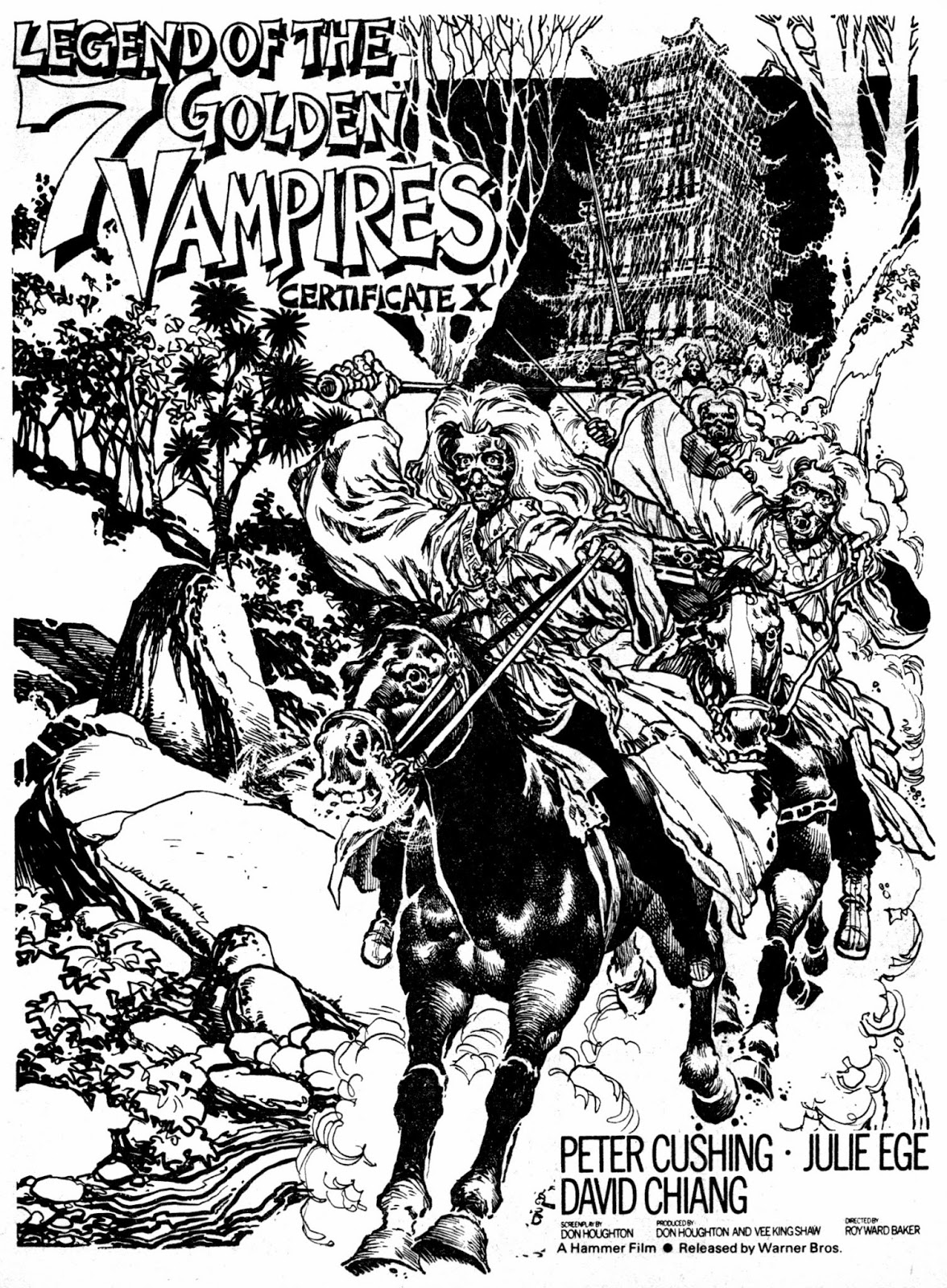 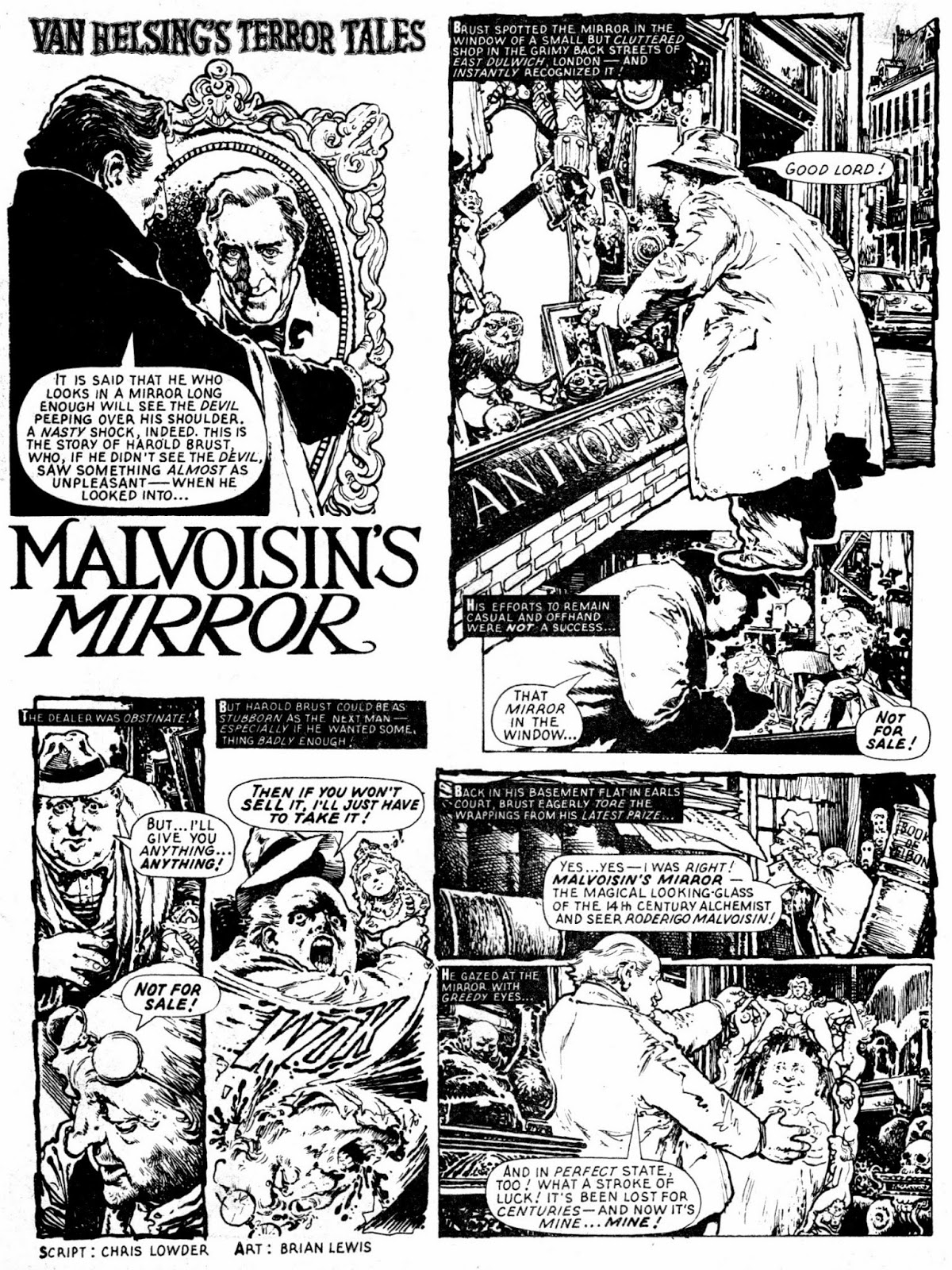 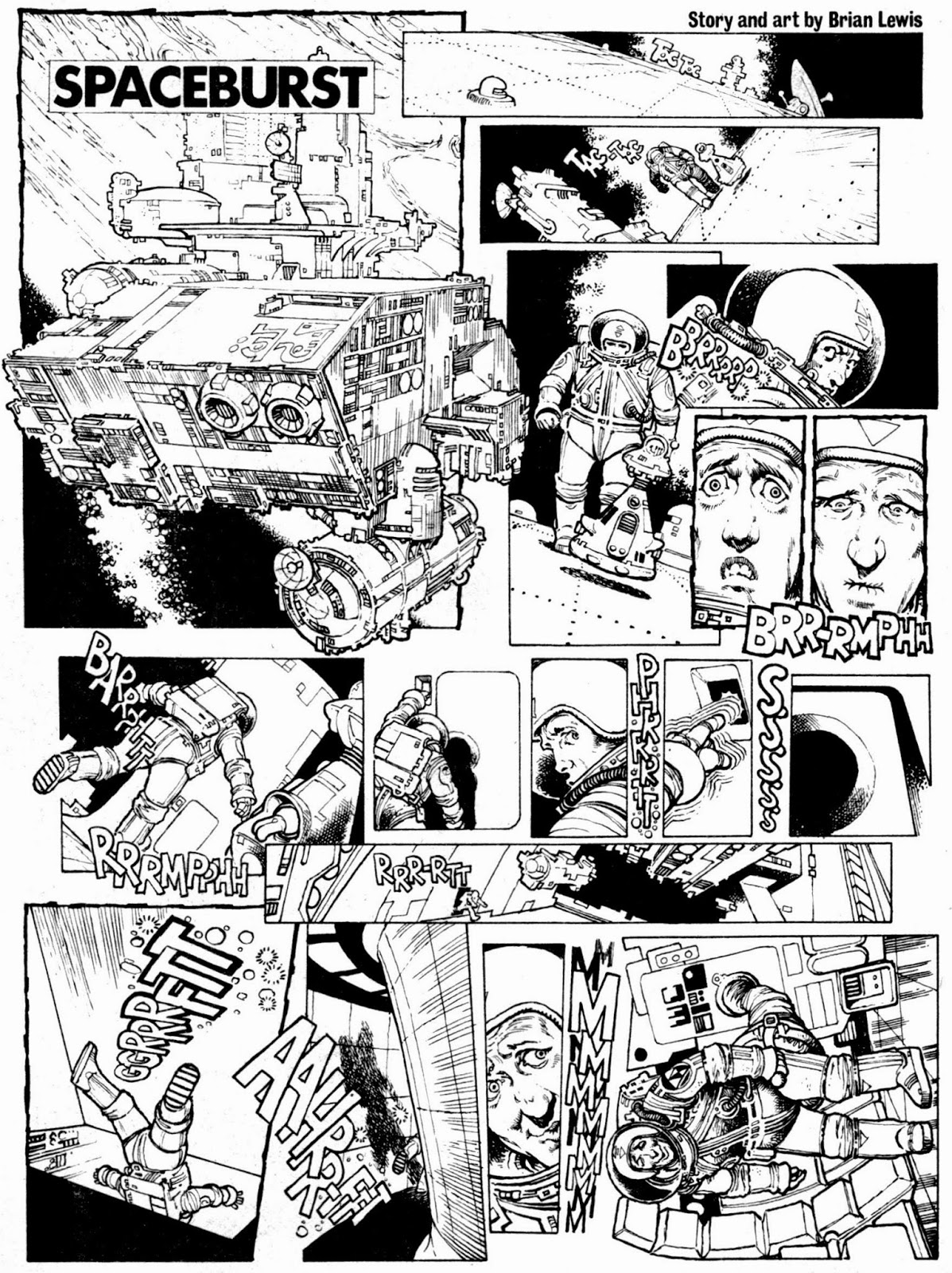 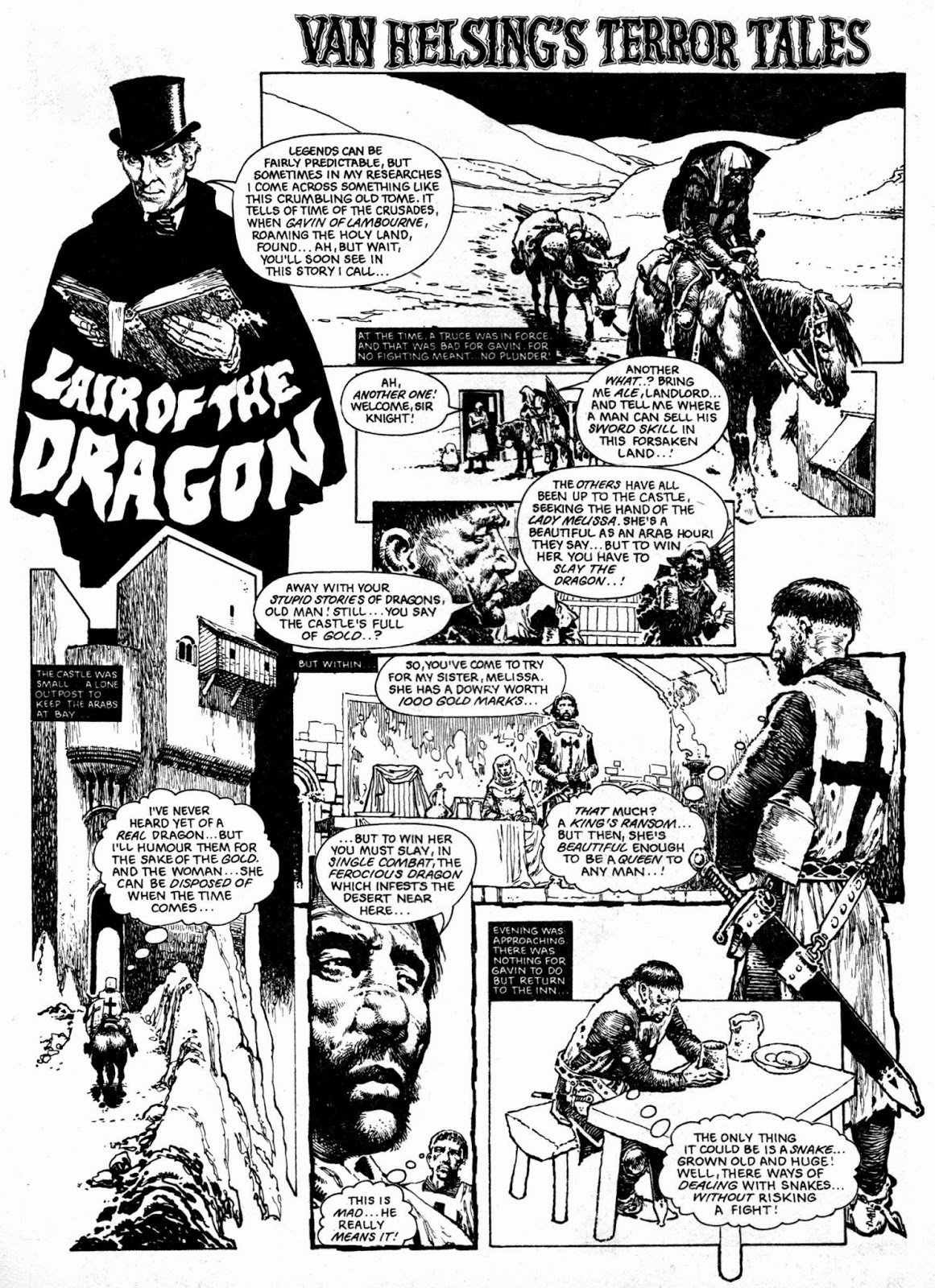 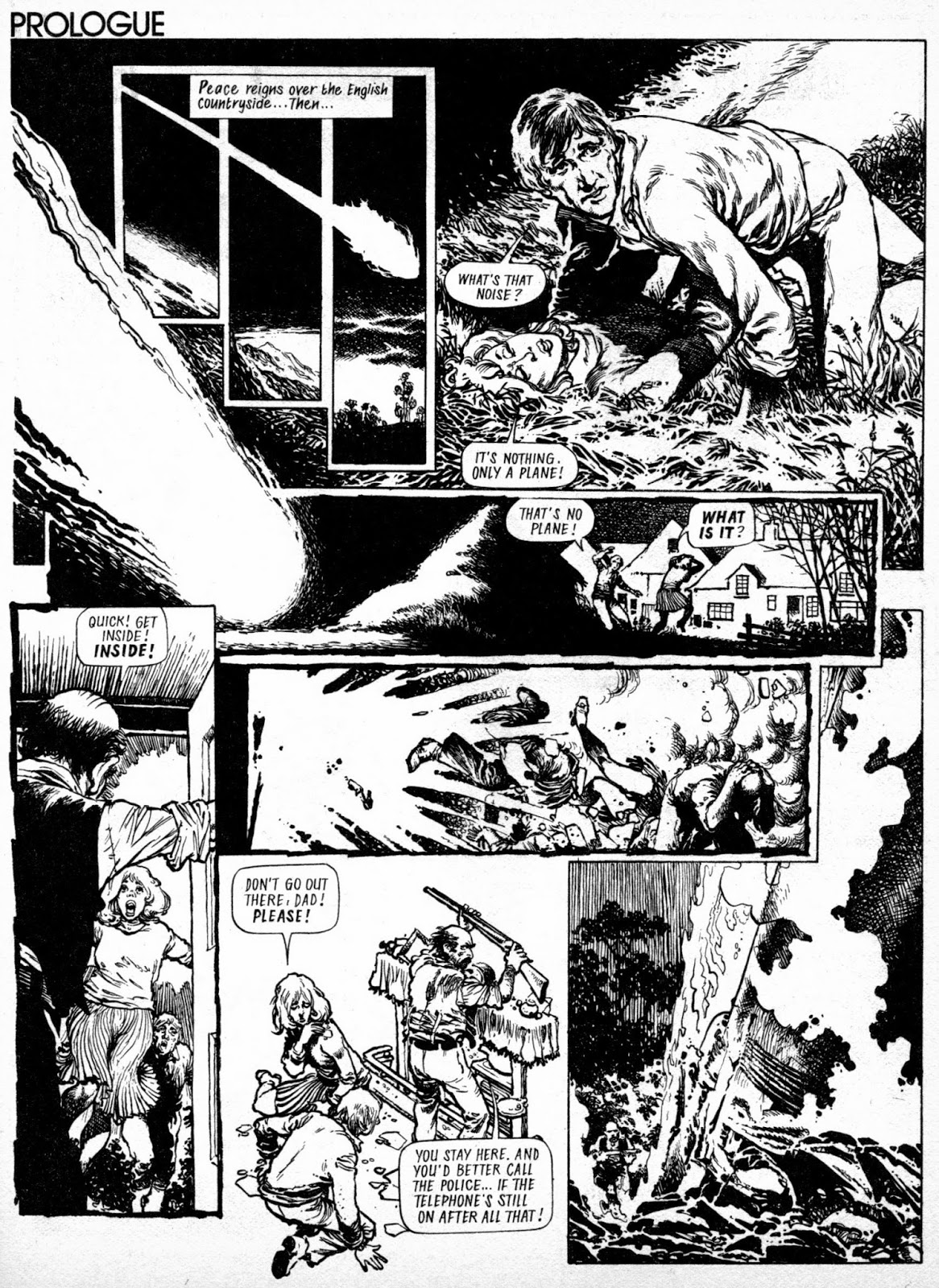 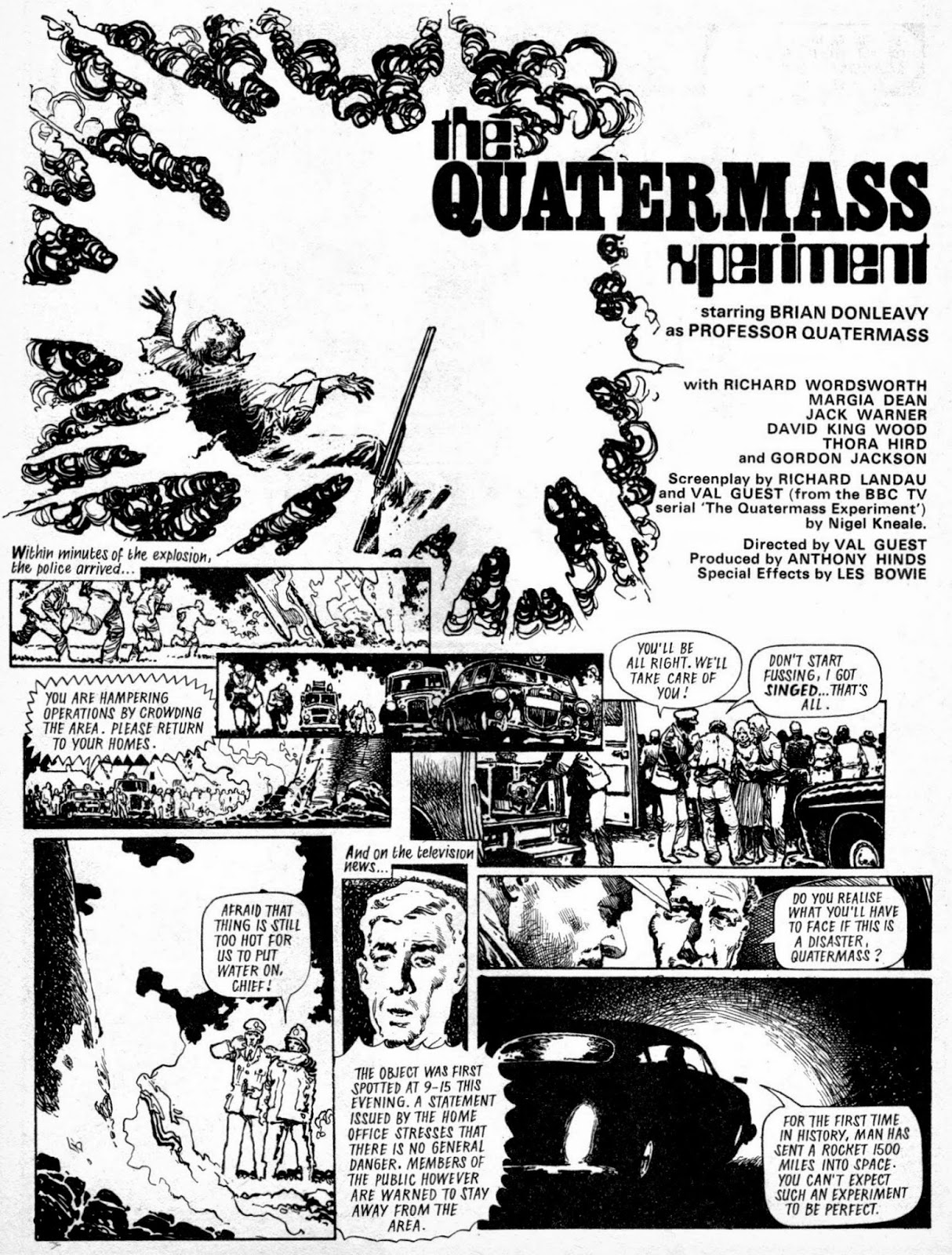 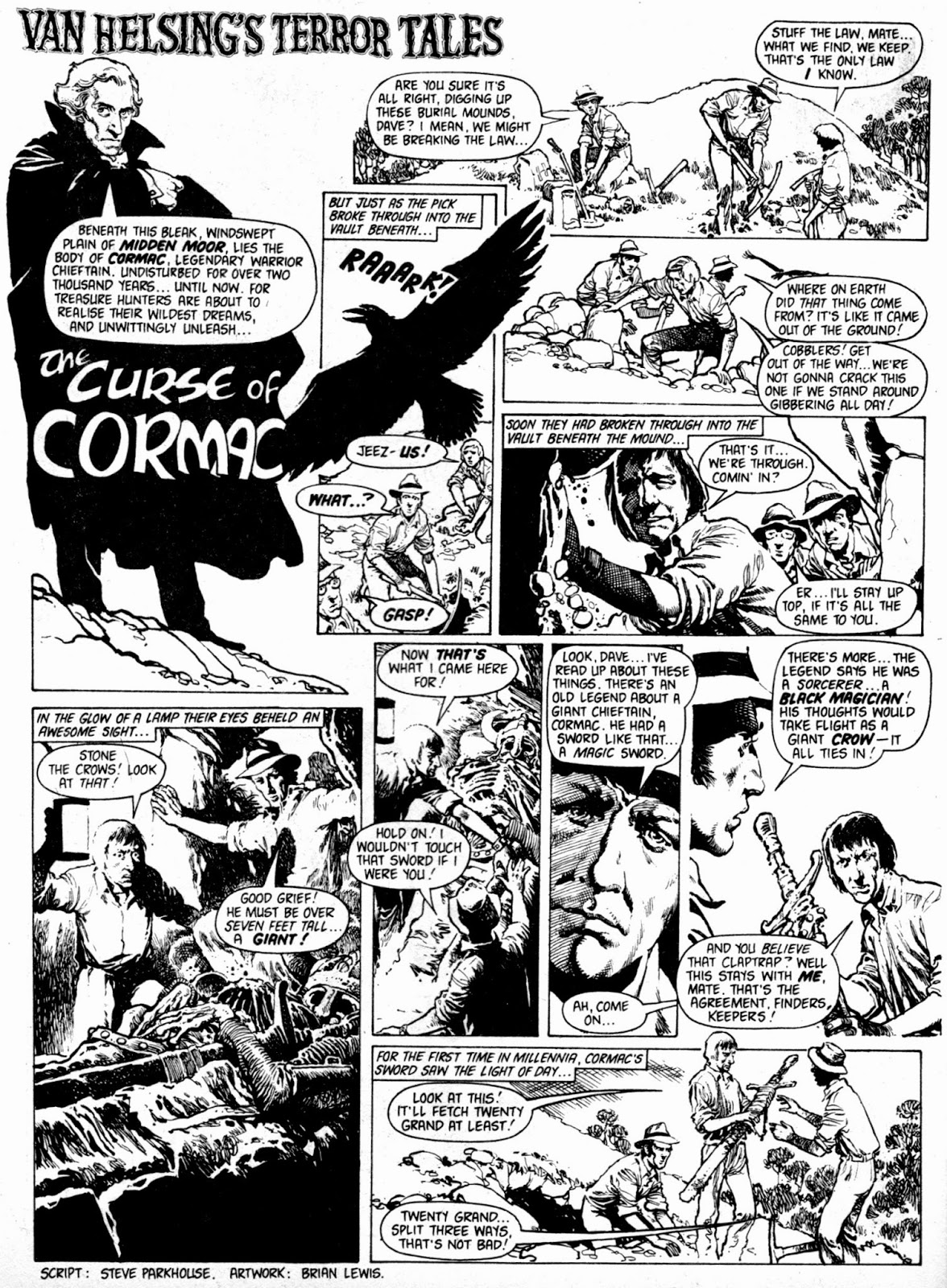 When we were about 10 my friend, Carl, used to mention a film called 'Legend Of The 7 Golden Vampires' which I'd never seen or even heard of - I even thought he might be making it up. Of course years later I discovered there really was such a film - I've never seen it but I believe it's a cheap Hong Kong kung-fu film, isn't it ?

I used to have this. I bought the mag every month along with Warrior, including the Marvelman and Dracula specials. But only from the date that Warrior #1 came out, so I missed it in its "House Of Hammer" incarnation.

I believe it is, CJ. I remember when it first came out and seeing the LP soundtrack in the record dept of Boots. Never bought it 'though and never seen the film.

I don't remember ever buying the mag at the time, JP - I only got this one several years back. Used to buy Warrior 'though.

Legend... was a Hammer co-production with the Shaw Brothers ( Hong Kong film-makers )and was a last-ditch attempt by Hammer to revitalise their failing Dracula / vampire movies. I've never seen it but it sounds absolutely nuts :-)

I did have a copy of this Brian Lewis special but I'm not sure if I still have it. It's probably at the back of a cupboard somewhere. There were some pretty good strips in there. Although most of them were reprinted from House Of Hammer, "Spaceburst" was originally published in the first issue of the venerable Starburst.

I remember seeing it in Starburst the day I bought it, Cer, but at the time I didn't yet know it was by the same artist who'd drawn Charlie's Choice. It was also Brian who illustrated the cover of Starburst #1. His name's on it.

I loved the 3 Quatermass films, especially the third, "Quatermass And The Pitt, ( I mean 'Pit')", but you cannot take your attention off it for a second, as by cramming all the episodes into a fast-moving 90 odd minute film, if you blink you will miss a vital part of the plot. The keen-eyed might have noticed that it was filmed at the very same (Hammer) set as " Daleks! - Invasion Earth, 2150 AD"!
Weird coincidence, when I went to see it at the flicks, I was actually living in a flat in Hobb's Lane, (where it took place)!

Maybe you're in it, JP? You could've saved a visit to the flicks by just looking out of your window as it happened.