The ol' memory may be going, I'm afraid.  I thought I'd already featured this comic in a previous post, but I can't find it on the blog.  So, just to be on the safe side, I thought I'd better do it again (or the first time, if I haven't already done it).

I'm not sure whether the above art by the late DAVE STEVENS was originally drawn as an imaginary comic cover then turned into a real comic by DARK HORSE, or was simply a pin-up (sans masthead) utilised fifteen years later when the comic was published, though for some reason I have the impression it was the former scenario.  This is the only ish in my collection, but I think there were at least another two issues.

BETTIE PAGE, as every fully paid-up perv will know, was a '50s pin-up model who had the uncanny ability of being nude without appearing to be naked (if you know what I mean), so natural and unselfconscious was she in her 'birthday suit'.  In later life she suffered from psychiatric problems and tried to stab three people, for which she spent some time in a mental institution.  Before all that, however, she had been PLAYBOY's 'playmate of the month' in the January 1955 issue.

Unfortunately, the tremendously talented Dave Stevens died at the ridiculously young age of 52 on March 11th, 2008, and Bettie Page passed away nine months later on December 11th, aged 85.  If you're a fan of Bettie (or Dave), this is one you might like to track down on ebay.  Shouldn't be too expensive. 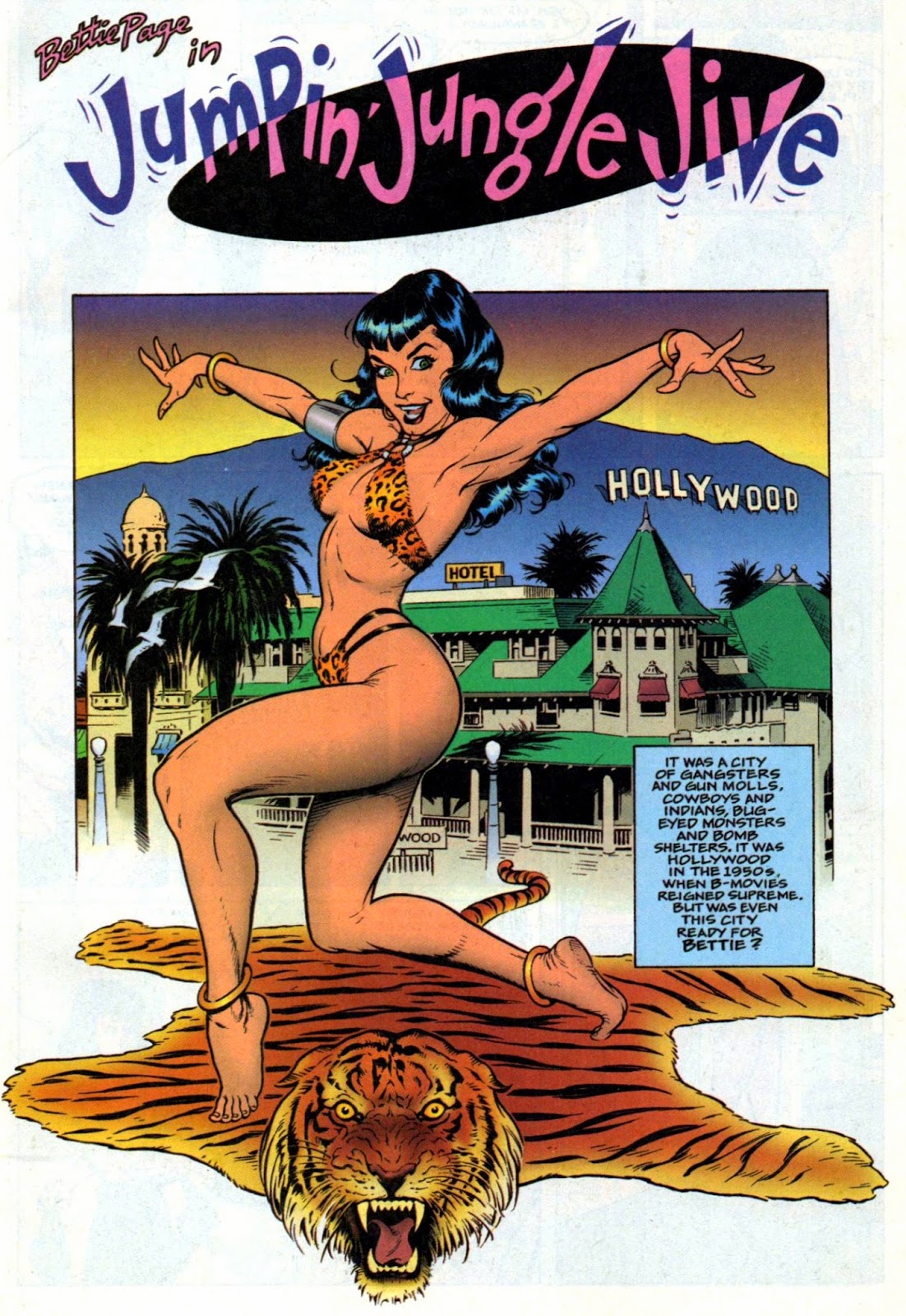 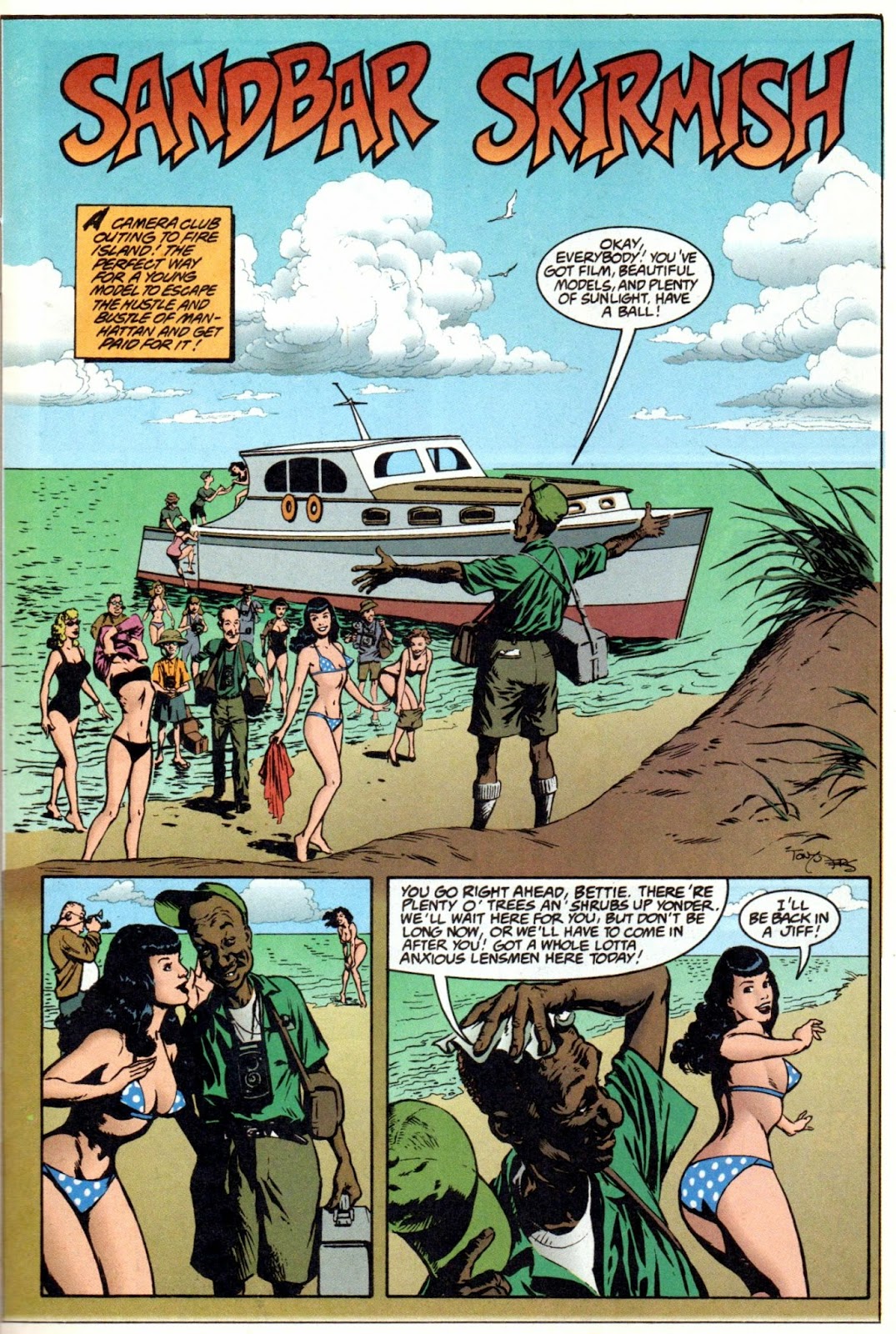 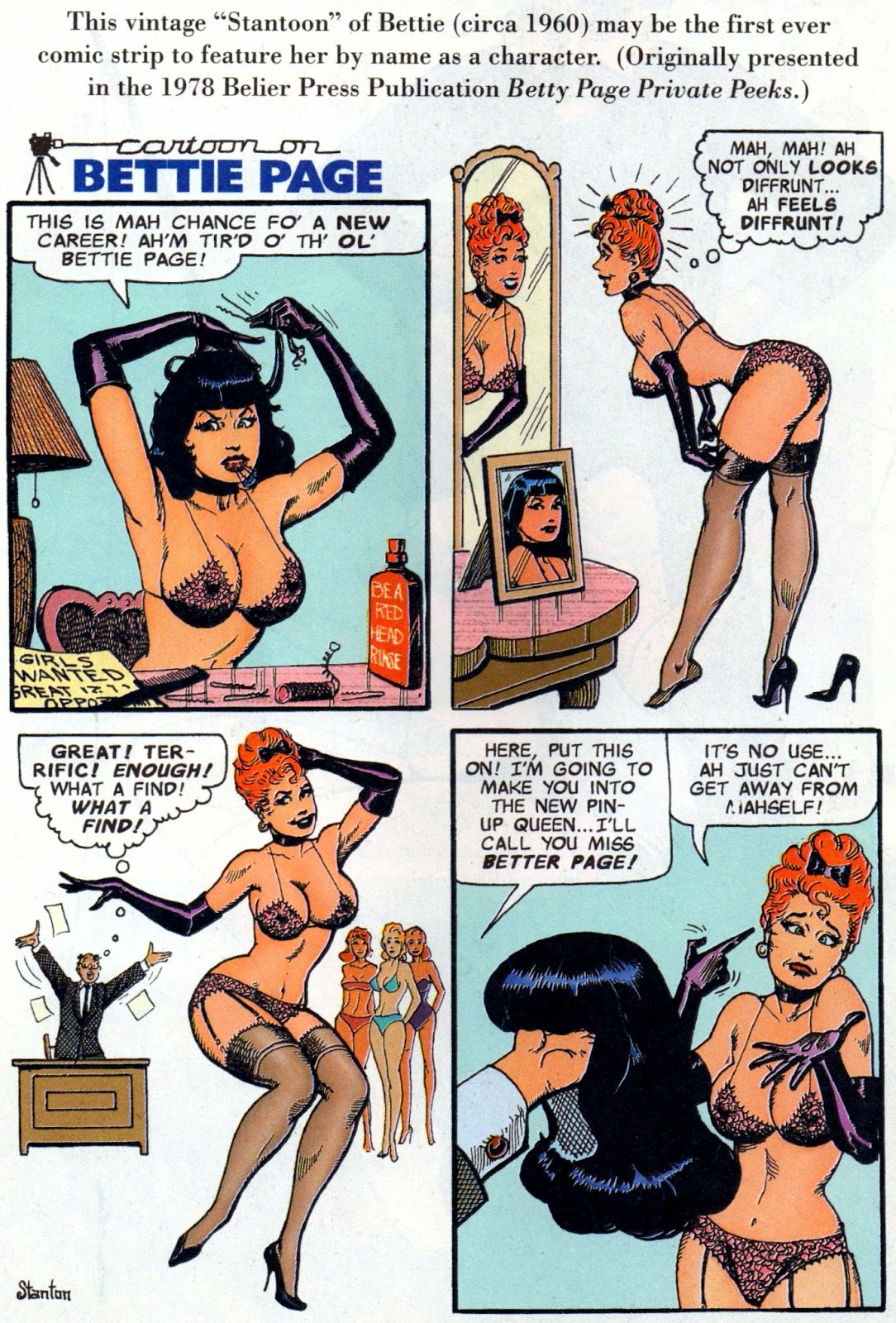 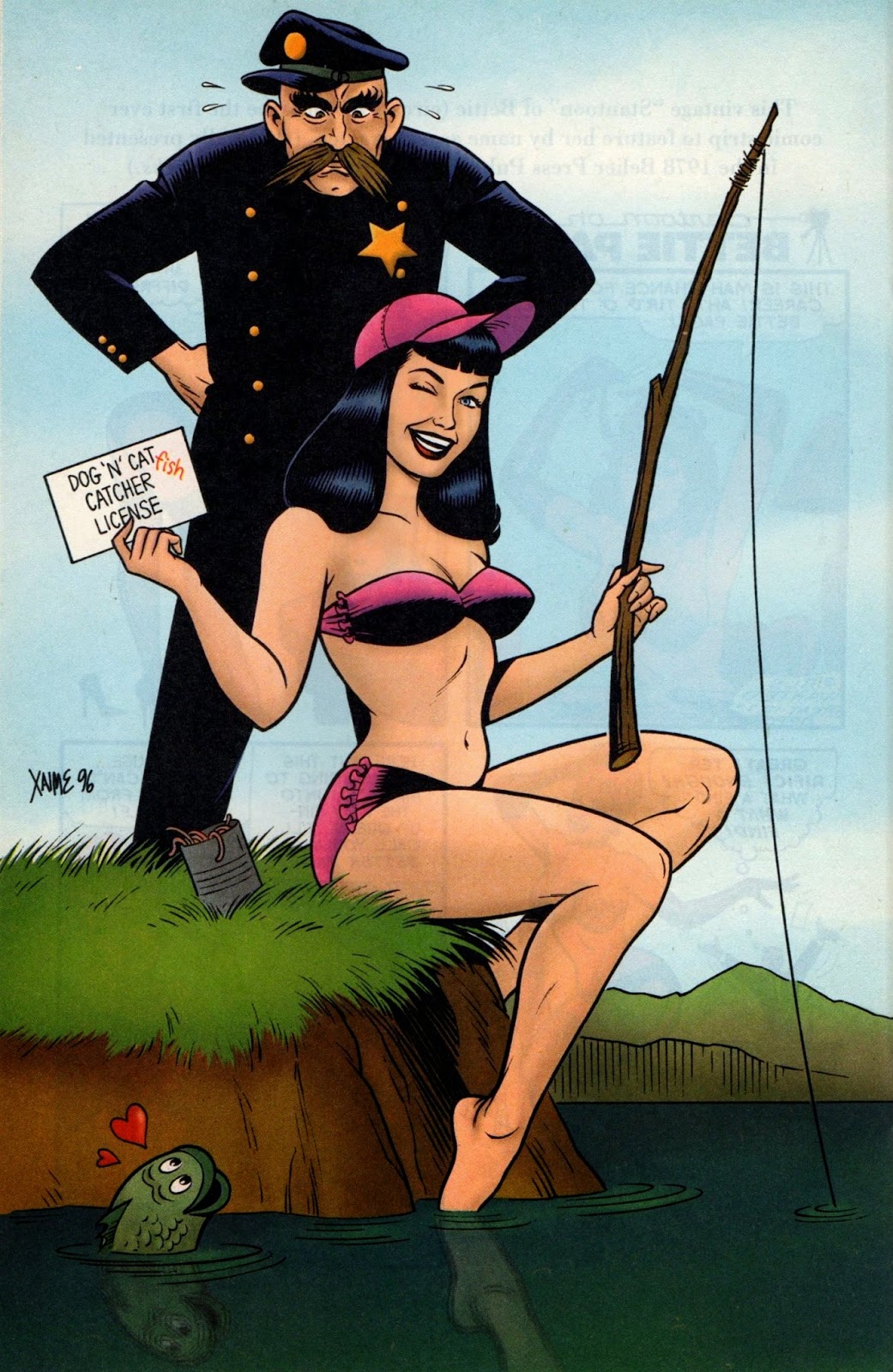 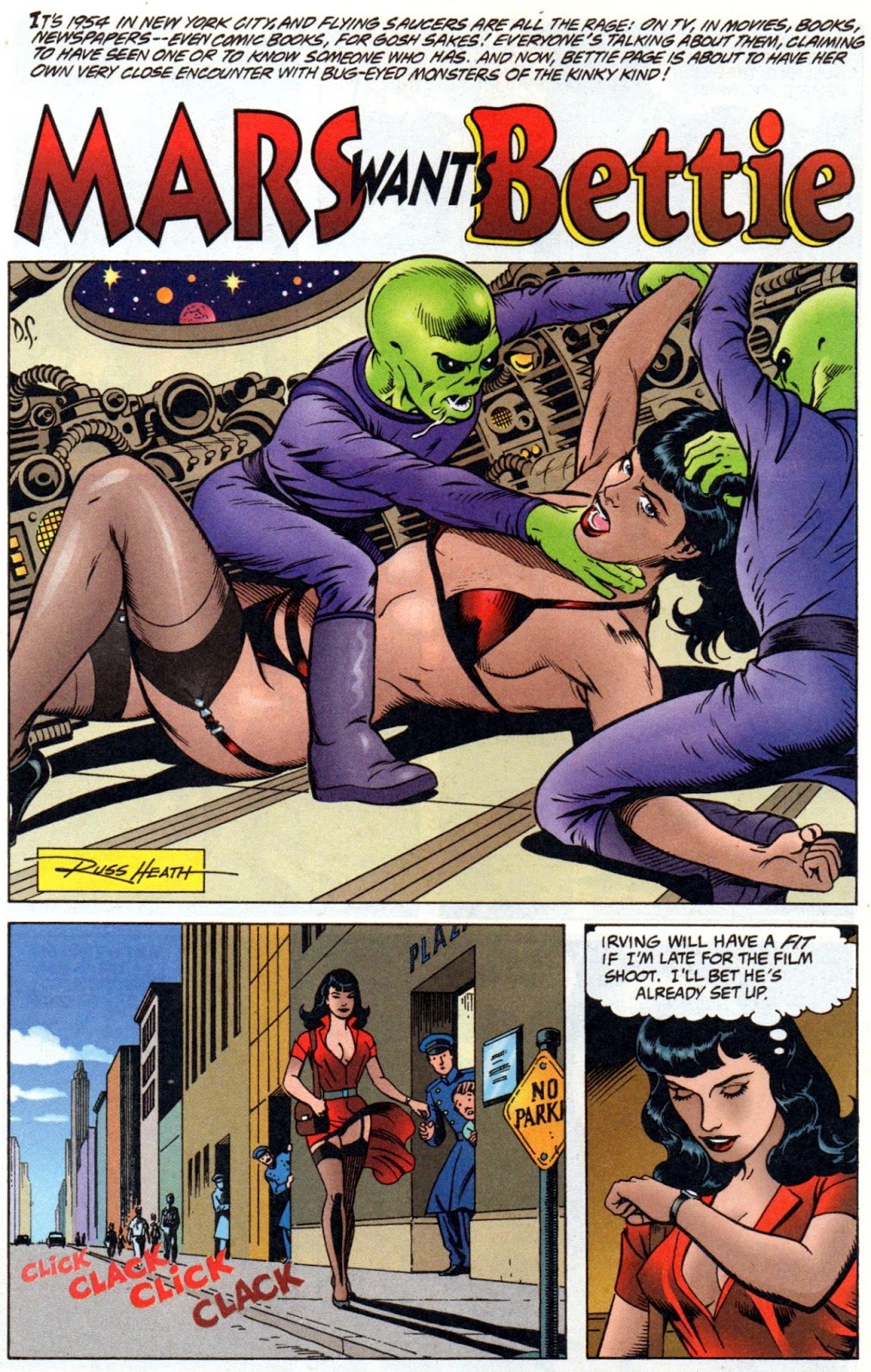 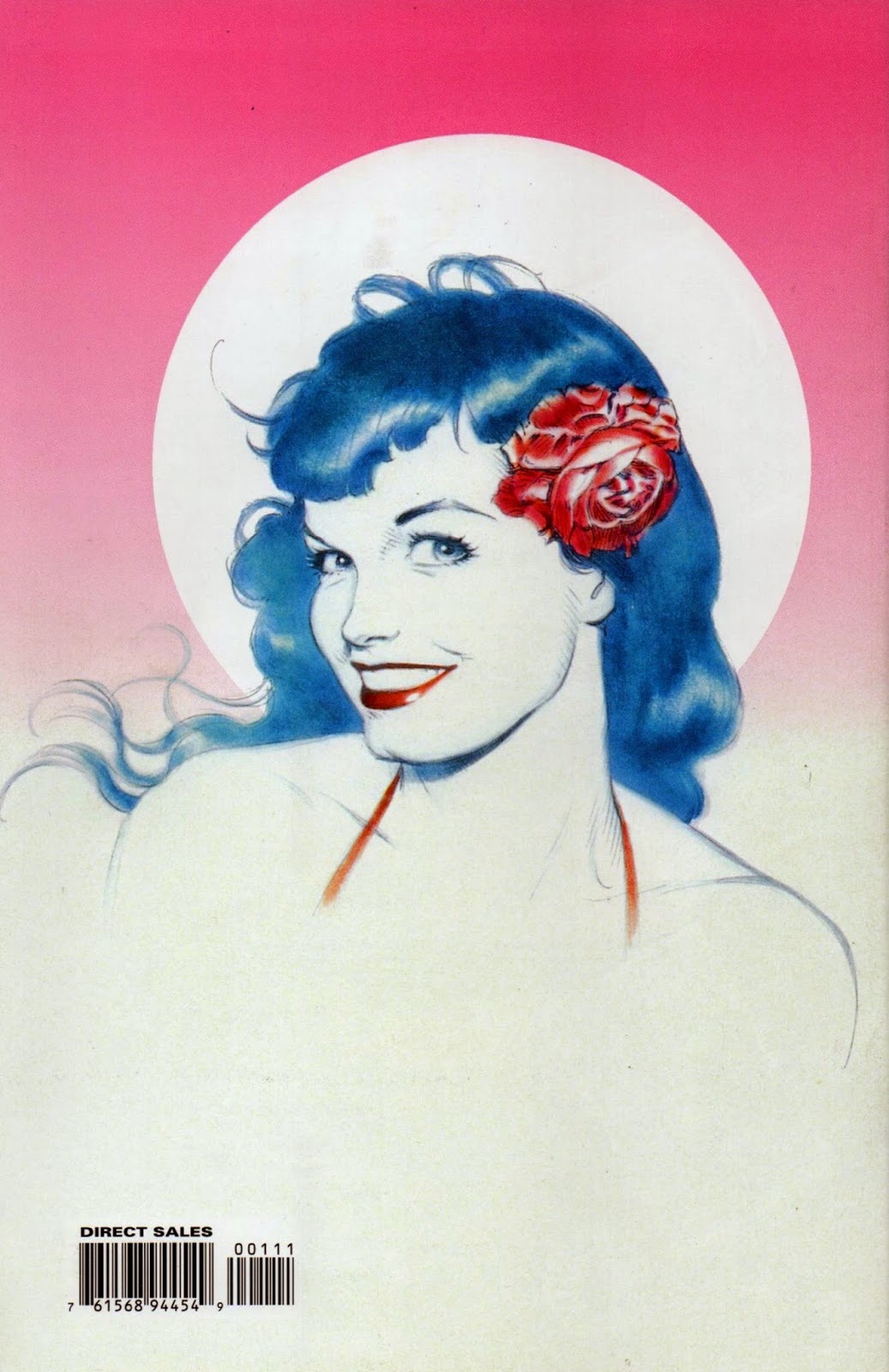 No, you've definately not shown this before.
It's all completely new to me.
I'm a bit worried about that cover! - Do you think they might eat her?

Oo-er, I'm not going near that one - I'll get into trouble.

Dark Horse published a three-issue "Bettie Page: Queen of the Nile" series in late 1999-early 2000. The covers were by Dave Stevens. I think the interior art was by Jim Silke.

Bettie Page also influenced the look of the hero's girlfriend in Stevens' Rocketeer series in the 1980's.

Thanks, TC. Knew all about the Rocketeer's gal, of course, as I've got them all, and I've seen two of the Queen of the Nile covers, but didn't know the year that series came out. As the ish in this post came out in '96, it must have been a separate release from the later ones.

I was going to say that cover, bearing In mind recent political postings....on the one hand it's satire and how black people were drawn in the 40s. On the other hand....racist?
And bear in mind I am a big Spirit fan. I like Ebony ...but I don't like how he was drawn. Even Eisner knew it was an old fashioned stereotype and tried to phase out Ebony.

If you're deliberately copying an art style from a different time, should you use old racial stereotypes? If you draw Blackhawk and Chop Chop is a little mustard colored midget, should you change him?
I have no easy answers, but like Socrates I merely ask questions.

Phil, I'd thought about referring to that aspect of the cover, but decided not to in case I was accused of being a racist bigot for even mentioning it. However, I don't think the cover is necessarily racist just because the black characters have a 'cartoonish' element to their facial features. It's become popular these days to knock any pictorial representation of black people that doesn't present them as noble, dignified people (which they ARE, of course - every bit as much - or not - as any other race of people), but I think cartoonists should be allowed the 'caricaturist' element of their craft. You don't hear white people complaining that Fred Flintstone presents white people as squat, fat, thick characters to be laughed at, so not all 'cartoon' blacks (like the maid in Tom & Jerry) are necessarily intended in a disrespectful manner. Most black people, I'm sure, would laugh just as much as anyone else at what some folk call racist caricatures, so perhaps racism (like a million other perceived slights) is in the eye of the beholder.