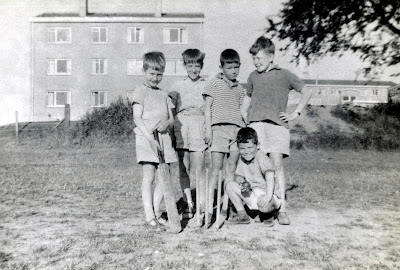 The spot these children are standing on no longer exists - at least not in the form you see in the photographs.  Approximately 21 years after the pictures were taken, the foundations for amenity housing for the elderly were laid directly into the area of field where these kids once played.  I'm actually in the photos and remember with startling clarity the Sunday afternoon or early summer evening they were taken back around 1967 or so.

As you can see, we were playing cricket.  Only a short while before, I had narrowly managed to dodge a heavy cricket ball and thus avoid a nasty knock on the noggin which could well have rendered me senseless.  (Go on - I'll allow you the predictable retort.) 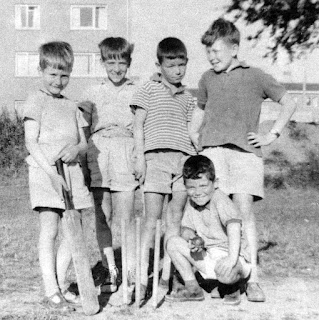 From left to right in the photo above are myself, Robert Fortune, Tony Tierney, Allan Robson and Kenny Tierney.  The photos were taken by Tom Tierney, who later became a regular contributor to the letter columns of the local newspaper, under the nom de plume of 'Goofy'.  If he were alive today, he'd no doubt have a blog in which to record his whimsical (and sometimes serious) observations on sundry subjects, but sadly he's been deceased for quite a few years now.

When we first moved to the area in 1965, it was Tony Tierney who introduced me and my brother to the rest of the kids in the neighbourhood.  I haven't seen Tony in quite a few years, but I still run into Kenny today from time to time, and it was his good self who supplied me with the photos you see on this page.  As I said, the field no longer exists - except in photos, memories and dreams - dreams which increasingly seem far more enticing than the rather drab reality of the here and now. 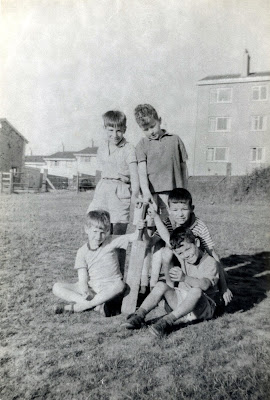 Photographs are marvellous things, aren't they?  Looking at a photo is like gazing through a window into yesteryear, at a moment frozen in time which grows all the more precious to us the further we become removed from it.

UPDATE:  (June 2013.)  The field remained undisturbed until 1988, a period of 23 years from when we first moved  there in '65 (we flitted in '72).  I therefore find it rather startling to think that the amenity housing has now occupied the spot for 25 years - two years longer than the time which preceded it.  And yet it seems to me as if the three-storey building was erected only a few years ago.  The mysteries of Time, eh?  I don't think I'll ever be able to fully comprehend them. 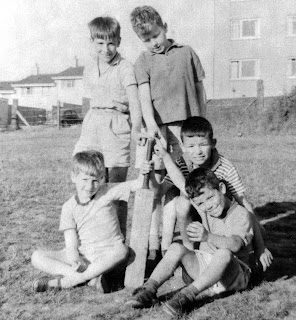 Ever drifting down the stream--
Lingering in the golden gleam--
Life, what is it but a dream?

From "Life is but a Dream" - by Lewis Carroll.

After posting this, I was going through some old papers and found this letter from my local rag, dated Wednesday 24th April - Thursday 30th April, 1996.

Goofy will be  missed

I was saddened to read and hear
of the death of Mr Tom Tierney, a
great story teller in your column
and other publications in his life.

He brought many a smile, with
his wit and local stories bringing
back many a cheery laugh.

My thoughts to his family.

This post is therefore dedicated to the memory of Mr. Tom Tierney, aka 'Goofy'.  Thanks to him, the above snapshots of a moment from my childhood are preserved forever. 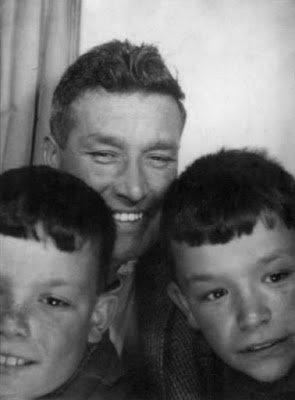 Excellent post, Kid. Now you've got me singing the song from 'Whatever Happened to the Likely Lads?'

"Oh, what happened to you, whatever happened to me? What became of the people we used to be...?"

I'm reminded of this poem whenever I read your thought provoking reflections on yesteryear.

'Into my heart an air that kills
From yon far country blows:
What are those blue remembered hills,
What spires, what farms are those?

That is the land of lost content,
I see it shining plain,
The happy highways where I went
And cannot come again.'

It's nice when there is photographic evidence of existence left in our hearts.

Indeed, Chris. I remember the photos being taken, but I didn't see them until well over 30 years later. It was nice to see the 'proof' of my memory.

Great photos Kid. That young fella on the left in the first photo....look at his sandals. We all had a pair of those at some time or another didn't we? Do you remember gym shoes were called pumps or plimsolls. Also, when you were sticking the wickets in the ground, did you use the top of the bat handle like we did. It was considered really bad form to hammer on a wicket with the face of your bat.

Yup, that's me. As you say, everybody had sandals in those days. I also remember the black plimsolls - no expensive designer trainers back then. You may remember visiting my 'Belmont on Boxing Day' post - the field in that photo is the very one in these ones, but taken from the opposite end.

Hi there, my name is Stacey and i was browsing the internet for short stories my great grandad wrote and i came across this page.

My great grandad was Tom Tierney known as "Goofy" and it was heartwarming to read this piece of writing and view these pictures about him. I have fond memorys of my great grandad tierney.

What grabbed my attention was the photos of my grandmother's (geraldine's)brothers, Tony and Kenny, they haven't changed a bit. What i find rather strange is where goofy was standing taking those picture, as the flats in the background is where i lived for a few years not so long ago with my daughter (Goofy's Great Great Grandaughter). It's almost as if he is looking into the future.

The patch of grass is indeed now a nursing home, where there is a swing park to the back of this nursing home today. I am not sure if the park was there also when these photos were taken. What I also find rather odd is when times were hard, or i had things on my mind, i would often take myself and my daughter to this playpark and sit on the bench or swings thinking and letting the world pass me by. I am always drawn to this area, rather strange but comforting now seeing these pictures.

Thank you for this lovely piece of writing on my Great Grandad, it has touched my heart deeply and i can share this with my family. I would be very grateful if you had any of goofy's short stories for me to read.

Thanks for commenting and sorry that the comments moderation feature meant you had to have several goes at submitting your remarks. In order to avoid offensive messages, no comments are published until I've read and approved them.

The swingpark did exist even back then, and I well-remember your Great Grandad. In fact, I sometimes find it hard to believe that he died all those years ago, because it often seems like I last saw him only a few weeks or so ago.

Unfortunately, I don't have any of Tom's tales (he was always MISTER Tierney to me), but I suggest you try Central Library and ask to see back issues of the local paper. That way, you can have a look through the letters pages and enjoy the thrill of discovery whenever you find one of Goofy's little observations on life.

Say hello to Kenny for me when next you see him.

thanks gordon for taking the time to put photos and info on your website gordon.kenny tierney

No bother, Kenny. Glad you liked it.