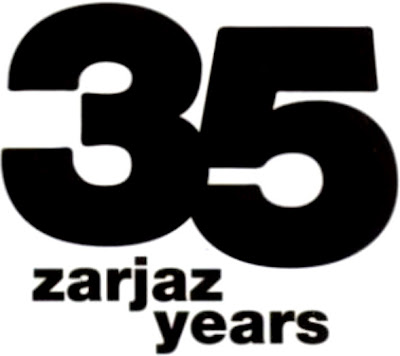 It's doubtless because it's 2000 A.D.'s 35th birthday this week that I've
recently found myself thinking back to when I used to be a contributor
to the iconic comic for several years, regularly lettering the adventures of
characters like STRONTIUM DOG and ROGUE TROOPER, as well as
(from time to time) JUDGE DREDD, THARG'S FUTURE SHOCKS,
NEMESIS THE WARLOCK, SLAINE - and a whole host of others.

Unlike the way American comics were mainly lettered in the '60s &
'70s - actually onto the pencilled page before inking - British comics had
a different system, the lettering being done on what was known as 'patch
paper' and then stuck down onto the finished art. In the case of colour
artwork, the lettering was applied to sheets of acetate film and processed
separately, so that if the artwork was printed out of sync (giving a blurred,
double-vision effect) the lettering wouldn't be similarly afflicted.

Most lettering nowadays, of course, is done on computer, but once upon
a time letterers had to mark their guidelines on a sheet of patch paper and
letter by hand within the lines. Some letterers, like BILL NUTTALL for
example, used a lightbox, with the guidelines already marked out on that.
He simply placed the patch paper over the box and lettered straight onto it,
thereby cutting out having to line each individual piece or sheet of patch.
Sometimes JOHNNY ALDRICH didn't use guidelines at all, but lettered
straight onto the patch paper.

Incidentally, patch paper was a generic term for adhesive paper which
came in different finishes - matt or gloss - and even in various degrees
of finishes. Too glossy and the ink line got thicker as work progressed
(due to the ink spreading out on the surface of the sheet); too 'matty' and
the line was too thin, with the penpoint catching on the surface as if it were
blotting paper. One had to have just the right degree of gloss to be able to
letter smoothly and quickly without any hiccups. TAC-TIC was the brand
name of one paper, and FASSON CRACK-BACK another.

Whether it was done the U.S. or U.K. way, quite a few lettering artists
used the 'rolling ruler' device in the above picture, enabling them to
mark out enough lines for one or two speech balloons at a time. I found
it too restricting, preferring instead to line a full sheet of patch paper on
my STAEDTLER MARS-TECHNICO drawing board (below), thereby
avoiding the 'start-stop' approach employed by most other lettering
artists. I usually got about four or five pages to each sheet of patch. 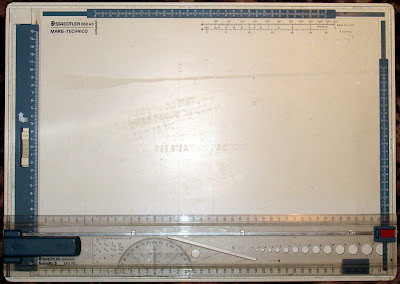 I remember one day, as I was lining my paper on the desk opposite
STEVE MacMANUS's in the 2000 A.D. offices (Room 2012), legendary
letterer TOM FRAME watched me for a moment before asking: "Do you
do your lettering on the board?" I explained that I only measured out the
guidelines on the board, preferring to letter the sheet of patch on a flat
desktop. "I wondered," he said, "because the edge of the board would dig
into your arm. It would be too uncomfortable." I agreed, but pointed out
the benefits of being able to do all the guidelines in one go on a complete
sheet of patch, rather than bit-by-bit as one went along. He never bought
one 'though, so I guess he remained unconvinced.
﻿
Speaking of Tom puts me
in mind of the ol' bumblebee
paradox that bees shouldn't
be able to fly because, aero-
dynamically, they're not best
designed for flight. Tom's
lettering was a bit like that.
Actual size, it was too high,
too narrow, and a little bit
scratchy-looking due to his
failing eyesight. It shouldn't
have worked - but, in print,
it did, and Tom's lettering
is considered by many fans
as integral to the 'look' of
Dredd's strip as anything
else which contributed to it.

Tom's best work 'though, in my humble estimation, was the
innumerable page of lettering he did for various IPC/FLEETWAY
publications back in the '60s, before his sight started to deteriorate.


I recall going to a nearby wine bar one evening with Tom and Stevie Mac,
as well as SIMON GELLER, ROBIN SMITH, and PAUL AILEY (I think -
might be LEATHERLAND), where I watched them play Pool as I nursed a
Coke and listened to JIM REEVES on the jukebox. This was unusual for
me, because I usually worked in KING'S REACH TOWER up to at least
nine at night, finishing off as many ltg jobs as I could before heading for
Victoria Station and my nearly nine hours trip home. That night, I must've
been ahead of schedule, hence my being able to relax for a bit. When the
time came to head for the station, I remember sharing a taxi with Steve
MacManus as he was going in the same direction for part of the way. 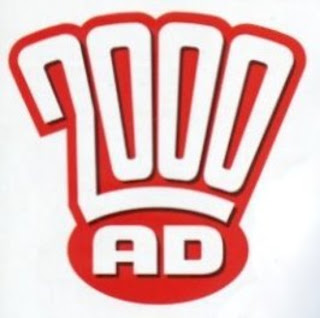 Sadly, Tom
died from cancer in
2006, at the age of
seventy-four. ALAN
McKENZIE (sub-
editor on the comic)
had helped him to
transfer his lettering
fonts onto a computer
programme a few
years before, allowing
him to continue a
career which failing
eyesight might other-
wise have curtailed.
It would be nice if the
current owners of the
comic, REBELLION, could come to an arrangement with Tom's family for
permission to use his fonts on the Dredd strip, thus perpetuating the
unique look that graced it for so many years.

Anyway, that's enough rambling from me for the moment. Pick up a
copy of 2000 A.D. today - before your future becomes your past!
Posted by Kid at Saturday, February 25, 2012

Hiya Kid,
I would just like to add and ask,
When 2000 ad first appeared on the shelves I did not for one second realise that 2000 ad was just around the corner and I would be living in it.
It just did not register with me and it was possibly the early nineties that I kinda had an inkling as to this undeniable reality.