THE TERRIFIC ORIGIN OF GIANT-MAN & THE WASP...

When scientist HENRY PYM first appeared in the MARVEL universe, the tale was intended as a one-off adventure without the slightest notion of any superheroic possibilities whatsover.  However, in the wake of the success of The FANTASTIC FOUR, he was dusted-down and promoted to the position of crime-fighting superhero, and given a natty new costume as befitted his elevated status.  (As elevated as anyone the size of an insect can be, that is.)  Perhaps realising that being ant-sized is hardly liable to strike terror into the hearts of evil-doers everywhere (or even anywhere), ol' Hank soon went the opposite way in the height department, becoming the goliath know as GIANT-MAN. 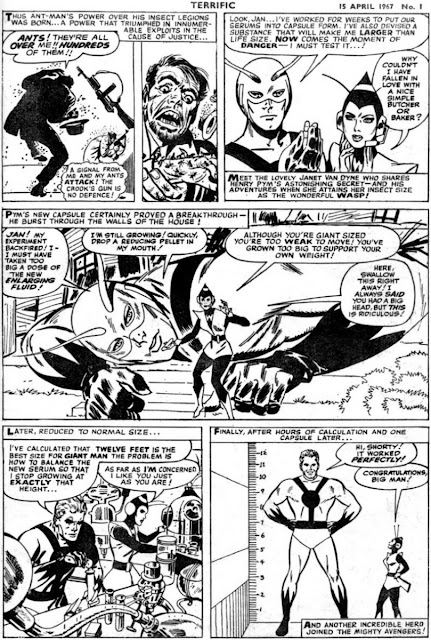 Pretty soon he was joined by wealthy socialite JANET VAN DYNE, who adopted the alias of The WASP - aptly named, because she was as irritating as an itchy anus. (Bit of a 'looker' though, so that was some compensation.)  Giant-Man was faced with some pretty lame opponents and would probably have faded into obscurity had he not lucked-out and joined The MIGHTY AVENGERS.  He later changed his name to GOLIATH, then his identity to YELLOW-JACKET, and then came an on-going musical chairs number in which he could never quite make up his mind as to exactly who he wanted to be.  Or maybe I just grew confused and lost interest along the way.  Same difference.