THE TERRIFIC ORIGIN OF IRON MAN...

When ODHAMS PRESS realeased the first issue of their new comic, TERRIFIC, back in April 1967, they realised that perhaps not everyone would be familiar with the pantheon of MARVEL heroes featured in one of the strips contained therein. Although previous adventures of the group had already been published in other POWER COMICS, there was no guarantee that buyers picking up the new paper would've read them. 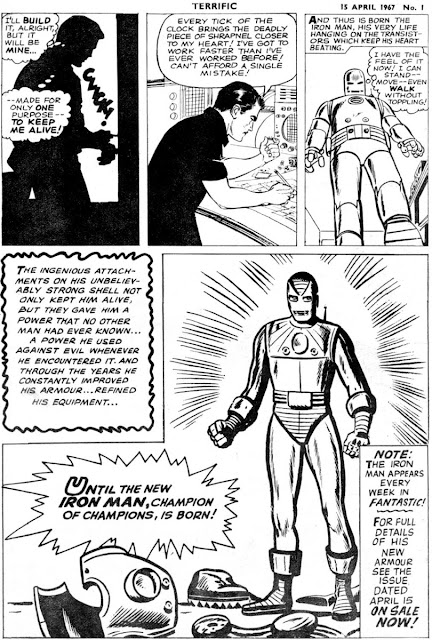 The group's first story to be presented in the new title was a reprint of the first half of the sixth issue of their U.S. mag, The MIGHTY AVENGERS Meet The "MASTERS Of EVIL!", so condensed origins of the individual members prefaced the actual tale itself.  Culled mainly from the heroes' introductory issues, the mini-recaps more than adequately filled in new readers with the backgrounds of those who comprised Earth's mightiest super-team.  They even threw in the origin of RICK JONES' TEEN BRIGADE for good measure. 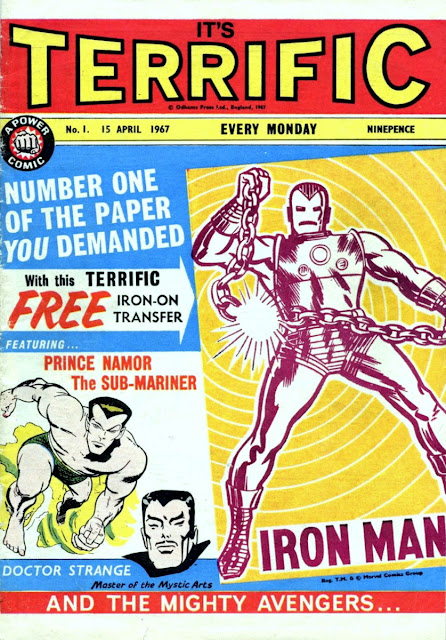 So, let's start with THE INVINCIBLE IRON MAN! "Watch his awesome approach!  Listen to his ponderous footsteps as he lumber closer... closer..."

COMING SOON:  The Terrific origin of THOR THE MIGHTY!
Posted by Kid at Friday, February 17, 2012

What a beautiful cover! That looks like a Kirby Namor but I wonder where it is originally from?

I gather that the FF's adventures were printed in Pow? From around about 35-36 of FF? I had always wondered why I'd never seen the early stories until MWOM started.

Dougie, the Kirby Namor is from THE AVENGERS #2, in a full-page ad for #3. It was also used on the splash page of #3.

The origin of the FF appeared simultaneously in WHAM! and SMASH!, with subsequent adventures appearing regularly in WHAM! until it was merged with POW! in early 1968. Their tales continued in POW!, then kept on going in SMASH! when merged with it later the same year. When SMASH! was relaunched in March 1969, the Marvel reprints had vanished, having been quietly concluded the week before.