Okay - so who said:  "Well, get off him you dirty buggah!"?  Hah! I knew that title would grab ya!  Too many years ago than is good for me, I lettered a SPIDER-MAN strip for some promotional purpose or other.  I also did a HULK one, but never received a copy of the finished result.  In fact, I never received a copy of the Spidey one either, and the only reason I'm able to show it to you here is because it was reprinted in The MARVEL BUMPER COMIC Holiday Special. 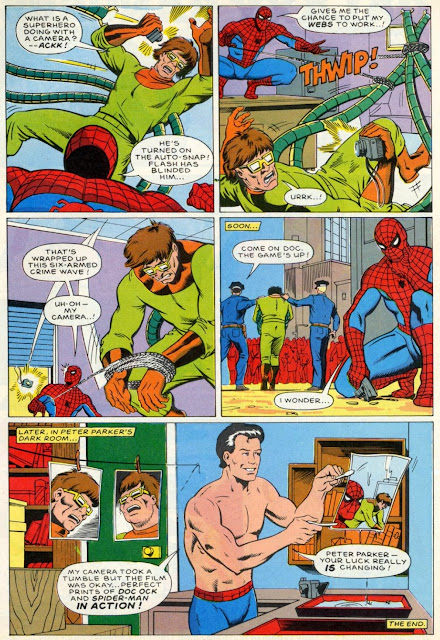 Incidentally, I have to make one thing crystal clear - it wasn't me who lettered the rather bland "MEETS DOC OCK!" title next to the logo.  I refuse to take the blame for it.  (I'd have done something much more fancy.)

The comic's indicia has a few different copyright dates, ranging from 1983 to '88, but those years represent when the strips were originally published, and - as far as 1988 goes - not necessarily when they were reprinted.  I have the impression the mag came out around 1989-'91, but I couldn't swear to it.

If anyone knows where the two-page Hulk strip appeared or whether it was ever reprinted, feel free to let me know.

Remember - click on image to enlarge, then click again for optimum size.
Posted by Kid at Friday, February 17, 2012

Do I detect trace elements of a second stringer there?

They don't call you Sherlock Straightman for nothing, do they? (What's it cost ya then?)

That Marvel Bumper mag was on sale in April 1989, so must've appeared them or a little before. I know this for sure because that's when I moved house at age 8, and my Dad bought a copy of said Marvel Bumper mag as on the last day in our old house. I have a vivid memory of reading that exact comic in a totally empty bedroom, waiting for the final car trip away from my old home forever.