STEVE THE MIGHTY STEPS DOWN... 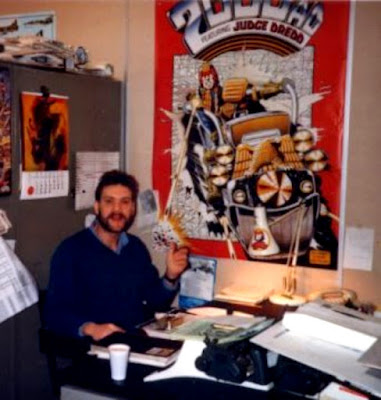 I see that STEVE MacMANUS, one of the better editors at
IPC's YOUTH GROUP until the infamous ROBERT MAXWELL
bought it over, stepped down last year from his position as Managing
Editor at EGMONT, after a career spanning thirty-seven or so year
in publishing.  (Yes, it's old news, but I've only just heard.  I wonder
if he got my last Christmas card?)

Steve was the fellow who gave me my big break at a comic mart
in the MOIR HALL at the MITCHELL THEATRE in Glasgow on
October 20th, 1984.  (So blame him.)  I well remember my subsequent
trips down to London to the IPC offices at KING'S REACH TOWER in
Stamford Street, and sitting chatting to Steve one sunny lunchtime in the
garden of a cheery wee pub just up the road from IRWIN HOUSE,
where the Youth Group had been relocated to in preparation for the
sale to Maxwell.  If I remember correctly, art assistant KEVIN
BRIGHTON was also there.

I may have told this tale before, but Steve, Kevin, and myself
were standing looking out of a window on the 26th floor of KRT one
afternoon (previous to the one above) in 1986, when I asked him what
2000 A.D. might be called in the year 2000.  He did a good job of hiding
his boredom at hearing a question he'd no doubt been asked hundreds of
times before and said something like:  "Well, that's fourteen years away,
Gordon - we don't have to worry about it 'til then."  And, truth to
tell, it seemed an eternity away at the time.

It's a scary thought to realise that 2000 is now twelve years ago,
and that moment on the 26th floor of King's Reach Tower is a whop-
ping twenty-six years in the past.  (Almost half my life away.)  I just
can't get my head 'round it - it seems like only a week or two back. 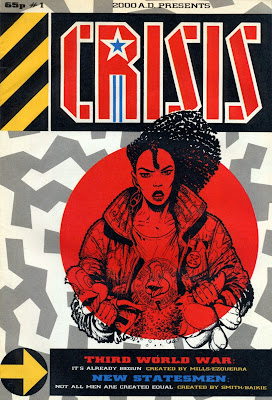 Strangely enough,
CRISIS, a 2000 A.D.
spin-off, was printed in
my home town in '88, and
I remember Steve coming
up to watch the first issues
roll off the presses, and
graciously allowing me
to accompany him to
share in the occasion.
This may have been the
final time I saw Steve
in person, as I stopped
going down to London in
December of '87, but I
still spoke to him on the
'phone from time to time
for a few years after that.
(Come to think of it, I saw
him at a Glasgow comic
mart in the early '90s.)

So, if it hadn't been for ol' Stevie Mac, I might never have had
a career in comics for as long as I did.  (Fifteen years.)  Just think -
he has to live with the guilt of inflicting me on the comics' world.

Here's to Steve, and let's hope he goes on to even greater
things from here on in.

Click here for my reminiscences of those early days.
Posted by Kid at Monday, February 13, 2012