WANNA RETURN TO 1965? THEN JUMP ABOARD THE TIME TRAVEL EXPRESS...

Ah, sweet memories!  Memories of 6 year old me standing on the path at the end of my front garden looking at the above issue of TV Century 21, just before getting into my father's Nobel 200* car for a family trip to the Town Centre shops.  (I'd purchased the comic earlier that morning from Chamber's news-agent around the corner from us.)  I recall gazing at the cover photo while sitting on the back seat of the car, and perhaps I even wondered why Dr. Who looked different to how he appeared on the telly.  (If so, it was explained inside.)  Given the cover date, I assume it was the school holidays, which must be why I was free for shopping excursions and not confined to the halls of junior academic learning. 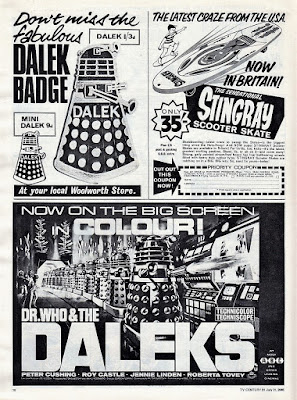 This issue was a real treat for fans of The Daleks and contained ads for all sorts of merchandise based on the scions of Skaro.  It also included a recipe for Chocolate Daleks, which was subsequently tucked in between the pages of one of my mother's cook/bake books for a number of years, in that house and the next.  (Yeah, remember when mothers could actually cook and bake, instead of just feeding their sprogs from McDonalds?  Mums just don't do that anymore, do they?)  I remember much about this comic, though not everything.  However, I do recall the terrific Fireball XL5 and Stingray pages (not shown here), as well as the Daleks back cover strip, with startling clarity, so they obviously made a big impression on me.  (Interestingly, aside from the masthead, the Daleks didn't appear in their own strip that week.) 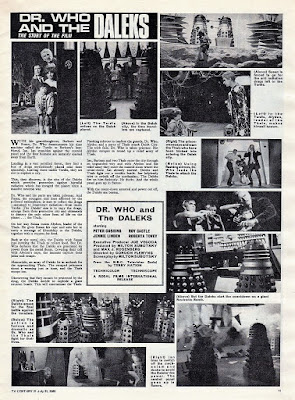 What I didn't realise until recently was that, although TV21 was normally a 20 page comic, occasionally it increased to 28 pages with no additional charge to the regular price (7d).  That probably wouldn't happen with any comic today, so City Magazines deserves a belated pat on the back for treating their readers so royally.  Okay, there was no extra comic strip content and perhaps the makers of the new Dr. Who movie met the cost of the increased page count as it was publicising their film, but the publishers could probably have added a penny or two on the price and had an editor's note inside to explain why - but they didn't, so good on them. 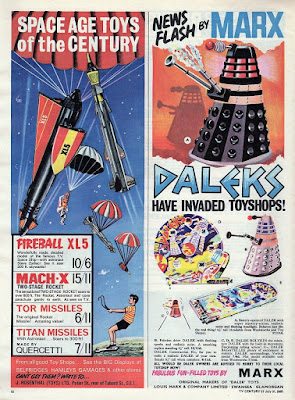 Anyway, to those who are around the same age as myself, I'm sure you'll have your own memories of this ish if you bought it back in the day, so I won't bore you with any more of mine.  I'll leave you with a look at the pages pertaining to Peter Cushing's first cinematic outing as Dr. Who when the Doc was just an ordinary human, before all the Time Lord from Gallifrey nonsense was introduced.  Life seemed so much simpler back then, eh?  Wish I had a TARDIS to revisit that era, but in the meantime I'll make do with the next best thing - my very own copy of TV Century 21 #28, from which these pages are scanned.  Enjoy!  And remember, click on any image to enlarge, then click again for optimum size. 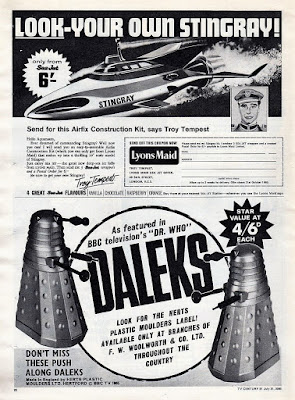 See those Herts Plastic Moulders Daleks in the above ad?  Well, that's me below with the one I had back in 1965.  I may've had more than one at different times. 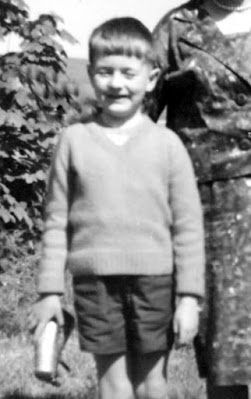 *In case you've never heard of (or seen) a Nobel 200 before, that's it below.  In the first photo I'm holding TV21 #19 while on holiday in Rothesay in 1965.  This pic was snapped in Port Bannatyne, though I couldn't say if the second photo, taken (I assume) by a visiting relative outside our house, was snapped before or after.  (The colour photo enlarges only once due to its height being under 1000mm.) 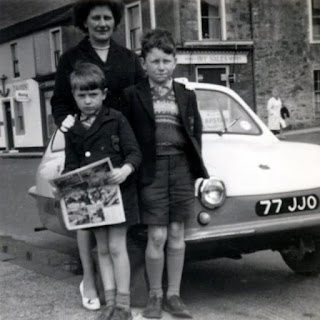 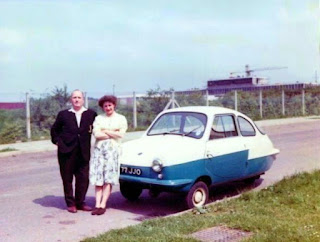 Thanks for posting, this, Kid. Isn’t it funny the impact that the adverts had on us? Seeing the ad for the Stingray Airfix kit reminded me that I had the kit, and my Dad dutifully glued it together for me. It was a big kit and very accurate. You got a lot for 6/-. I kept it pristine for years - well into my twenties - but eventually sold it or passed it on to one of my pals.
Also, don’t you love photos where you’re seen holding a comic? It allows to to date the old photo with great accuracy.

My pleasure, B. It's interesting that both the Stingray and Fireball kits were probably the most accurate representations of the craft ever produced - even up to the present day. Having said that, the Product Enterprise diecast Stingray seems extremely accurate, though their Fireball model could've done with a higher back 'fin'. Isn't it amazing how a comic can bring back, with such startling clarity, memories of so very long ago? Almost to the point that it almost seems like we're back there again.

As for the photo with TV21, I assume I bought it that day, but I don't think City Magazines cover-dated it a full week ahead (at least they didn't to begin with) as other publishers usually did, I think it was only a few days. So I can really only tie that ish down to within a day or two. However, I know what you mean, and in most cases you're right. (With UK comics anyway - US ones are a slightly different matter.)

I don't think I have any photos of myself holding a comic (and not many with toys) not because I didn't have any comics/toys I just don't think we took family photos with them (a shame). I really like to se those old adverts again my favourite is the " Count Dracula's deadly secret" ice lolly advert (a black cola ice lolly with red flavoured filling ) and the Clarks Commandos adverts with art by Tom Kerr as they were comic strip ads (I used to think the Clarks Commando adverts were actually comic strips for the comic itself.

1965, jeeez that's along time ago cant even remember what comic I was into at 5/6 years old the Dandy, SMASH or Wham probably .

I wish I had more photos inside my former homes, McS, but most parents at that time (it seems) reserved taking photos for when their families were on holiday and outdoors. Even the few photos of us outside any of our houses were mostly taken by visiting friends or relatives (hence the colour), as my father only had an old Kodak Box Brownie at the time. Also, he never had a flash, which is why he tended not to take indoor pictures as they simply wouldn't have come out. Wish I had more childhood photos of me with my comics and toys too.

Incidentally, the Clark's Commandos strips are on the blog somewhere. Just type the name into my blog's search box. I may also have shown the Dracula ice lolly ad before too.

I love the advert for the Mach-X rocket. I used the two handle launcher for a cataput for years after the rocket got lost, broke or stuck up a tree somewhere.

I want to know more about the car. Three wheeler? The one I remember is the Reliant Robin which had one wheel in front. Also I wasn’t keen on that Dr Who movie for all the reasons you can name. Which is a pity cos the Daleks were great in it.

Yup, the Nobel was a three wheeler, PS, with the single wheel at the rear. My father had several Reliant Robins after this car, but only one at a time, obviously. I quite enjoyed the Dr. Who movie, though I didn't get to see it until it was on TV around the mid-'70s. It would have been better with William Hartnell (or Cushing playing Hartnell's version, right down to the look), and it certainly needed the interiors of the TV TARDIS.

Meant to say, PS, that if you type Nobel 200 into my blog's search box, there's a few posts about the car, at least one of which will give you a bit more info.