THINGS ARE NEVER QUITE THE SAME AFTER 43, ARE THEY?

Y'know, 43 is a number of significance when it comes to TV Century 21 - from my perspective anyway, even if no one else's.  Or maybe it was 42, but I think it was 43.  It all depends on precisely what date #43 went on sale.  It bears the date of November 13th, but I'm not sure how far ahead TV21 was dated - it may only have been a few days instead of a full week, but I associate the Fireball XL5 strip in that week's issue with the house we moved from on the 8th, so I'm assuming that's where I read it, not the house we moved to.

Does it matter?  Well, obviously not to you - why should you care? - but it does to me.  Maybe it's a coincidence, but while I recall every Fireball, Stingray, and Lady Penelope story up to the 43rd issue with stunning clarity, not much after that ever made the same kind of impression on me, aside from the Stingray adventure in issues 45-51 and the Lady Penelope serial involving an invisibility torch in #s 44-51.  I also remember all The Daleks strips, though I sometimes mistakenly connect a few from after #43 with my former house, as I do with the Lady Penelope 'torch' tale. 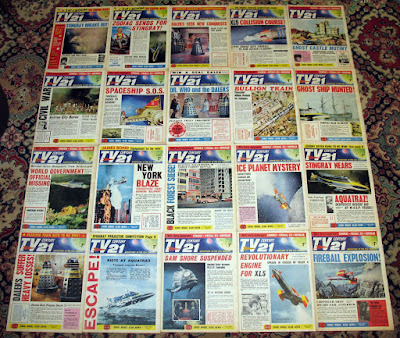 "Right, so get to the point, you waffling bag of wind!" you may be thinking.  ("No 'may be' about it!" you cry.)  Well, those 43 issues represent the house I was living in at the time, the first primary school I went to (I often bought the comic en route), and pretty much the period of my life between January and November 1965 (or 2065 if you prefer).  Sunny summer days, snowy Christmases, atmos-pheric Hallowe'ens, and smoky Guy Fawkes nights (I speak in the plural, though we actually only had one full summer and a single Christmas in that house), all encapsulated in memory in those 43 issues.

It's possible the early issues made more of an impression on me due to the fact that it was a new comic, and the thrill of that gave it a momentum for close to the first year before levelling off somewhat.  Also, I was soon to discover the thrill of the Odhams Power Comics and their reprinted Marvel stories, and that was a pretty hard act to compete with, especially after The Daleks strip disappeared from TV21 after number 104.

Anyway, the above preamble explains why I'm showing you those first 43 issues, and justifies me taking the time to lay them all out on the floor and photographing them.  Remember, I did it just for you Crivvies, so if you feel slightly tempted to leave a comment of appreciation, then don't hold back.  Oh, and I also have quite a number of subsequent issues in its various formats, which I'll doubtless get around to showing you some day.

Incidentally, checking this post just before I press 'publish', I now wish I'd taken the photos the other way around.  By that I mean, the first three issues together instead of the last.  Oh well, they're all tucked away again back in their cupboard so I'm not digging them out to re-photograph

I was 43 when my mother died and I became an orphan so I agree things aren't the same after 43.

Well, things wouldn't have been the same after your mother died regardless of what age you were, eh, CJ? But it's nice to know the post's title resonated with you, as I imagine that some people will be bewildered by it.

It was issue 52 for me when they dropped Lady Penelope and replaced her with Thunderbirds. Or perhaps it was that I was just another year older.

Issue 52 was also when they changed the logo to a smaller version, DW. I preferred the original one. They were also exactly halfway through the 104 Daleks strips. When they disappeared with issue 104, the comic was never quite the same again.

I was never a regular reader of TV21 for some unknown reason (probably because 1965 was the year of Ranger with Trigan Empire and Asterix (renamed something else in the UK), and that was as far as my pocket money would stretch. Apropos of TV21, did you see this Tweet from Lew Stringer? https://twitter.com/lewstringer/status/1406900092741824517?s=21

Not a fan of the man and don't visit his sites, B. Was it anything interesting? I've got a few issues of Ranger, but it wasn't in TV21's league really.

It was a brief Tweet talking about the one-off issue of TV21 243 that was produced a few years back and floating the idea of doing a #244. I agree that Ranger was not in TV21’s league.

He's out of date, B. TV21 #244 can be obtained from Fanderson. It's mainly articles as opposed to comic strips and it's a wee bit smaller (less high and wide) than 243 was, but it's an official TV21 #244. You can see it on the blog somewhere. I'm afraid that while I was thrilled to see 243 a few years back (and Fanderson also did that number of the comic back in 2010), there was only a couple of strips that could stand alongside the original comic. If you type TV21 243 into my blog's search box, you'll see a few posts showing somethings that might interest you. Just scroll down them one by one.