The very first weekly comic I ever bought on a regular basis was TV Century 21 back in 1965.  It's therefore natural for me to associate illustrated Supercar and Fireball XL5 strips with the periodical because it's where I first saw them in comic strip form - as far as I remember that is.  Aside from a TV Comic Summer Special I had around 1963 (from which I only recalled Mighty Moth, not even by name, but by artist Dick Millington's style when I saw his art again maybe a couple of years later), I don't think I bought a weekly copy of TV Comic until after TV Century 21 was up and running. 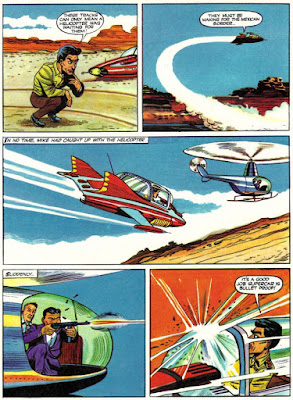 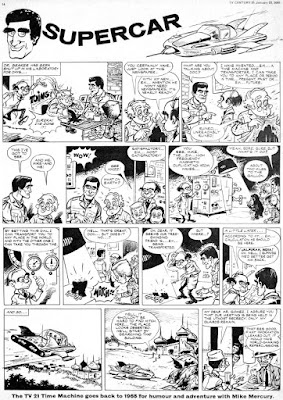 So it feels strange on occasion when I'm reminded that Supercar and Fireball had a comic strip life prior to TV21 (though perhaps not to you if you were a regular reader back then), and something that brought it home again to me recently was when I received my replica Supercar Pilot's Licence and badge, first given to readers of TV Comic who joined the Supercar Club back around 1962.  Whether the club was created and run by the comic's publishers or was a separate entity, I'm not sure.  Maybe it was similar to the Corgi Model Club News in TV21 (the comic having no connection to Corgi) in that it was featured in its pages, but perhaps not necessarily connected to the publishers.  Anyone know? 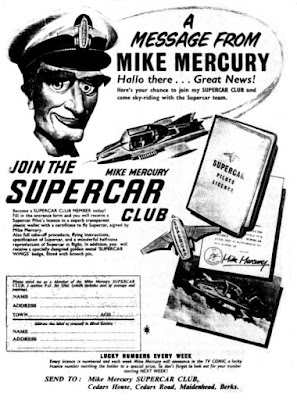 Having seen the TV Comic strips in later years, I feel that the Fireball one can't really compare to the dynamic visuals Mike Noble brought to the table in TV21.  Strangely though, TV Comic's Supercar strip is better than TV21's, in that it's an action/adventure strip, whereas TV21 played it for laughs and turned it into a humour strip.  It might not be immediately obvious from the art, but the tone of the stories differed.  It would've been great to see an artist like Frank Hampson, who illustrated a Fireball and Lady Penelope adventure (for the weekly and a Summer Special respectively), draw a serious Supercar story.  I kind of think that City Magazines missed a trick there, as TV21 already had humour covered in the form of My Favourite Martian and Zoony The Lazoon. 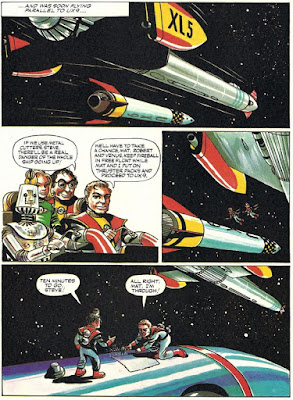 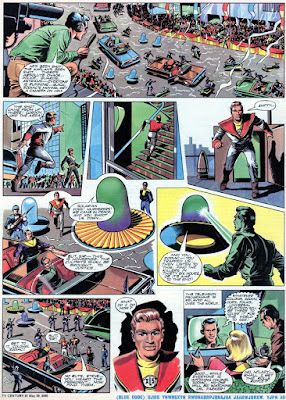 Incidentally, the first Supercar and Fireball pages shown here are from TV Comic Annuals, as although Supercar appeared as a colour centrespread in the weekly, I'm not sure whether that was always the case or not.  And as I haven't seen full-colour pages of Fireball in the comic, I felt it wasn't fair to compare the b&w/spot colour of the weekly with Mike Noble's glorious full-colour artwork, hence my use of TV Comic Annual pages.  This way, it's more 'like-with-like' (with the exception of the TV21 Supercar example as that was only ever printed in b&w).

Anyway, are you ancient enough to recollect both strips in each comic, and how do you think they compare to one another when you sift through the sands of childhood memories? 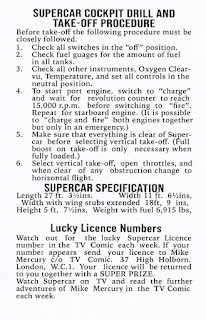 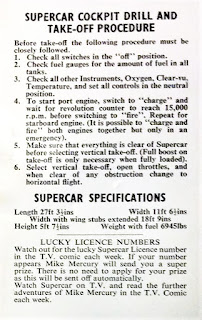 Spot the difference.  As you can see from above pair of images, the details of the Lucky Licence Numbers was simplified at some stage, but I couldn't say exactly when.  Neither could I swear to which version was the first, though I'd guess it was the one on the right of the screen.  Does any knowledgeable Crivvie know how long the Supercar Club ran for?  Feel free to share.
Posted by Kid at Wednesday, June 16, 2021

Sadly I never bought TV21 at this time and rarely bought TV Comic. My only memory of Supercar was having a toy version of the car which as I kid I remember loving but have very little memory of it other than the memory of owning it.

Funnily enough, McS, I now find myself owning, in my dotage, more Supercar stuff than I had as a child. It's not supposed to work that way, is it?