Several days ago, on ebay, I bought a Buster badge that was given away as a free gift with the weekly periodical back in 1983.  Then I happened to see the issue (from another seller) that one of these badges would've been attached to and decided to buy that too.  Rather fancifully, I find myself wondering what the possibilities are that the badge is the actual one that belonged to this particular comic before they were separated all those years ago.  Unlikely I know, but not entirely impossible, eh?  Anyone else ever ponder things like that, or am I the only nutter who does so?

Anyway, the cover was unavoidably marked where the clear tape once held the badge in place, so I decided to do something about it to improve its appearance.  I chose to go for a minimal 'touch-up' and retain an indication of where the tape had been, rather than attempt to completely disguise the remnants of its residence, and I'm fairly pleased with the result.  I may decide to do a more thorough job in the future, but for the moment I'll leave it as it is.  The picture above is the 'before', the one below is the 'after'.  Didn't I do well-ish?!

On the subject of badges, although I've never been a wearer of them, I have quite a nice collection of comics-related examples (and others), which I may get around to featuring on the blog one day.  One is the Buster Club badge from the '60s, which puts paid to the mistaken assertion a couple or so years back by the writer of an article in ComicScene (is it still on the go?) that Buster weekly never had a club.  All together now - "Oh yes it did!" 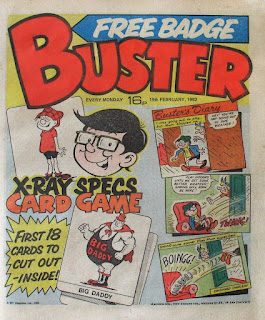 Nice restoration. I read Buster when it first began in 1960. At school we formed two groups in the playground, one The Snigs the other The Dinkles which was based on a comic strip in Buster. I think we played 20 a side soccer as a result.

It was always strange that Buster didn't appear in his dad's strip in the Daily Mirror.

Actually he DID, T47 - on one of Buster's anniversaries a picture of him was added to an Andy Capp strip in a newspaper. (It's on the blog somewhere.) I think the whole 'son of Andy Capp' thing was done without Reg's approval, so the connection was relatively short lived.