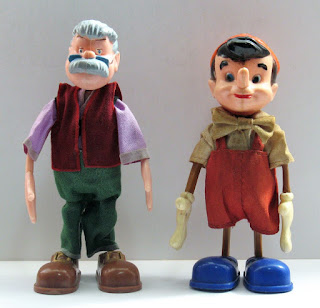 I can tell you for a fact that it was Friday 5th November 1965 that I left my first primary school for the final time.  For several days at least, the teacher had been giving our class daily readings from Carlo Collodi's book, Pinocchio, and I recall being slightly miffed that I now wouldn't get to hear the end of the story.  It was many years later as an adult that I finally bought an edition of the book for myself and read it at my leisure, concluding the adventure begun in childhood so many years before.

On the Monday of the following week, my family moved to a new house in another neighbourhood, and on the Wednesday I had my first day of attendance at my second primary school.  A few short years later I bought a Marx Toys 5 or 6 inch 'twistable' figure of Geppetto* (probably from a shop called Nurseryland), and I've always wondered whether it was simply because I remembered his name from my final days at my first primary as I can't see what there was about the character that would've appealed to me.  Maybe it was just a case of me having money and wanting to spend it on something.

(*That same night, I watched a Miss Marple movie on TV - Murder Ahoy, starring Margaret Rutherford - and therefore associate the film with the figure as a result.)

A number of years ago I bought the Marx Toys Pinocchio twistable figure (again, not quite sure why), on ebay, which has sat in the shadows of a cupboard since I got it.  A few days ago, I saw, at a very reasonable price, Geppetto (again on ebay), so took the plunge and made the purchase.  This time I knew why - simply to replace a toy I'd once owned when I was an innocent youth who seemingly had forever in front of him.  (How I wish I could re-create that illusion today.)

Now Geppetto and his son can share that cupboard space together, and I can enjoy a measure of satisfaction that comes from 'reuniting' the pair after so many years of separation and isolation.  Don't you just love a happy ending?  (We'll ignore the fact that the figures aren't in a proportionate scale to one another.)