ROBERT THE ROBOT - I CAN SEE RIGHT THROUGH YOU (WELL, ALMOST)...

Many years ago, back in the early '90s most likely, I bought white metal recasts of the Fireball XL5 crew which had been part of the MPC Fireball playset manufactured in the early '60s.  (Which costs a small fortune on the collectors market these days.)  I had a choice of painted or unpainted and opted for the unpainted ones, figuring I could do them myself when time allowed.  Guess what?  Time has never allowed and they're tucked away somewhere, awaiting the application of a paintbrush by my own fair hand whenever I have a chance to get around to it.

Several years back, I noticed that someone in Canada was producing transparent recasts of the Robert figure and I finally got around to buying one a few weeks ago, which arrived today.  At last, a Robert the Robot figure that resembles his TV counterpart, and even though he might not have his mechanical 'innards', it's the closest I think we'll ever see to how he should look as far as a 'toy' goes.  So I'm a very happy chappie and therefore thought I'd give you a glimpse of the newest addition to my vast accumulation of stuff.  (H'mm, now where have I heard that expression before?)

And if there are any toy companies out there reading this, I'd love to see a Jetmobile with Robert on it, similar to the Golden Gate one with Steve Zodiac and Zoony from the '60s.  So what are you waiting for?  Get to work before I fall off the twig.  And what about the rest of you Crivvies?  Are any of you fans of Robert, or do you have a different all-time favourite Gerry Anderson character?  Do tell! 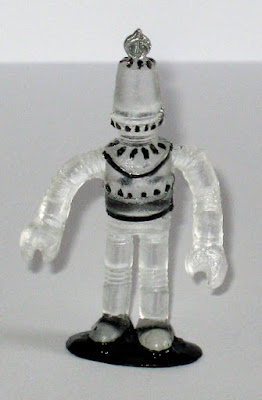 Gosh! Could you share where you got this? I want one! I have the MPC plastic one somewhere (God knows where) but a transparent one would be PERFECT for my robot army collection.

Go to www.bigredtoybox.com/repro/index.html - you'll see everything they've got, LM.

I'm not a big "toy" collector but I have to say that is really cool - love it!

lol - I went to check the price of the wee fella (just in case it was in my price range) but the shops not taking any new orders as he is so busy.

The seller starts taking orders again on the 1st June, McS. Robert's not too expensive considering he's such a unique collectable, but it's the postage from the States which is a killer. Only way to get him though. You got a birthday coming up? A word in the missus's ear might do the trick.

Oops! I meant postage from Canada, not the States, McS.