BY THUNDER - IT'S ADAM ETERNO, THE MAN WHO WOULD NOT DIE!

Today I revisited the early '70s - or perhaps it would be more accurate to say that the early '70s revisited me - when my hardback collected edition of Adam Eterno (from Thunder) arrived at Castel Crivens.  Once more I was a kid, back in the living-room of my previous home and thrilled by the adventures of the man who would not die - unless struck a fatal blow from a weapon (or anything used as a weapon) made of solid gold.  And that's a significant detail to remember - it had to be what under normal circumstances would count as a fatal blow, not just a glancing or weakly administered one, so merely touching him with a gold object wouldn't necessarily kill him.  Nor would throwing a gold-plated cigarette case at him from the other side of a room bring his demise should it strike his person.

Anyway, as usual with those wonderful chaps and chapesses at Rebellion's Treasury Of British Comics, this is a delightful book that is sure to rekindle warm memories of your youth if you were a reader of Thunder back in the day.  However, a few observations are in order or this wouldn't be a proper Criven's review.  I found the reproduction of some of the earlier strips not quite as sharp as is usual for TOBC's collected editions, so I assume that, as the contents are sourced from actual published comics, perhaps the pages used had 'bleed-through' and the process by which this was removed also resulted in some loss of fine detail.  Also, although any spot colour has been removed from any pages on which it appeared in the weekly strips, it's been retained for the text story from the 1974 Annual.  I think I'd have preferred to see it kept in the weekly strips also, even though it wasn't on every page (and maybe not even in every instalment).

This handsome book contains all 22 strips from Thunder's original run before it was merged with Lion, plus all the Eterno strips and illustrated text stories from the Annuals for 1972-'74.  It also has an introduction by Colin Page, one of the various artists on the stories reprinted within.  Officially released on May 26th, it can be obtained from Rebellion's webshop, and will doubtless be available in some better quality bookstores.  This is volume one, so further volumes are sure to follow if this one proves a success.  (It's also available as a softcover edition.)

Was Adam Eterno one of your favourite strips when you were a lad?  Why not share your memories and impressions of those halcyon days of yore with your fellow Crivvies?  You know where the comments section is, so don't be shy now. 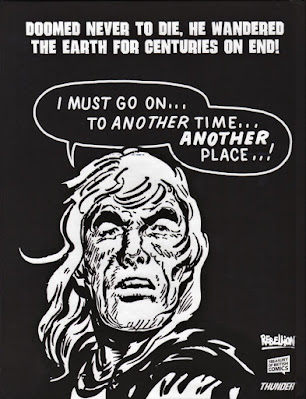 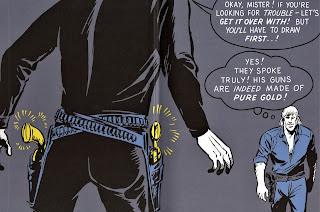 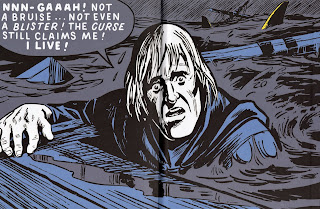 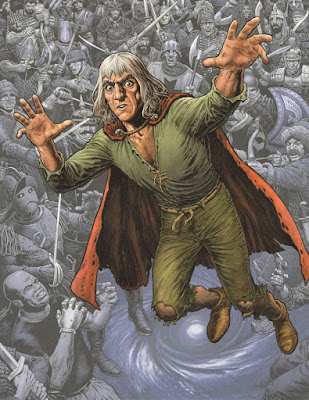 I am not familiar with the character though the b/w drawings you show are similar to GARTH in the Daily Mirror.

As is the time-travelling aspect, T47. I wonder if the idea was borrowed from the Garth strip?

I absolutely loved the Adam Eterno strip when I was a kid. I read most of it when Thunder merged with Lion (think I only read about 5 issues of Thunder) so if these are the original Thunder run then that's brilliant. I have this and the Steele Claw collections on my list of must haves. I think Tom Kerr one of my favourite UK artists, drew some of the early strips . Adam Eterno was one of the strips I used to read first when I got my copy of Lion .

Tom Kerr drew the very first strip, McS, can't recall offhand if he ever drew any more. The hardback is £19.99, the paperback (softcover) is £14.99. What with The Steel Claw, Janus Stark, Billy's Boots, The Spider, Johnny Future, Trigan Empire, etc., I'm building up a nice little library of classic British comic strips.