I'm currently re-reading my Jack Kirby Jimmy Olsen issues and have spotted yet another of Jack's kooky 'kock-ups' in #s 142 & 143.  In the former ish, the person who shot and killed Jim Harper (the original Golden Guardian) is revealed as a balding, bare-faced baddie, but in the next issue, he's sporting a full head of hair and a moustache, as well as being slightly foreign looking.  (At least Jack drew him holding the 'phone in the same hand.)
Perhaps the guy he's speaking to asked him to hold for a moment so he took the opportunity to affix his toupee and false moustache?  Or maybe that beer he's drinking has been spiked with hair restorer?  Whatever the reason, it's yet another lapse in continuity that Jack was so (in)famous for throughout his distinguished comics career.  If you'd like to see previous examples of this sort of thing, just type 'Kirby Kock-Ups' into the blog's search box and all shall be revealed. 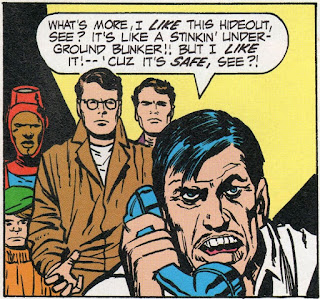 Can't help wondering if Jolly Jack was having a dig at a moustachioed former collaborator who wore a hairpiece...

I think he'd have shown the process in the same ish if that were the case, DS, like he did with Funky Flashman in Mister Miracle.

I'd forgot about Funky Flashman! That was, as you say, a very blatant dig ftom the King at the Man in question. Always felt that Funky and his brown-nosing sidekick Houseroy were a little mean-spirited and the sort of thing that Jack, as wronged as he may have felt, should really have been above. But it's easy for me to say that of course: I've no idea how hurt Kirby may have felt at the time, whether justified or not.

Back in the day, I didn't realise it was a dig at Stan and Roy - didn't find out 'til years later, but yes, it was a little mean in that he was insinuating that Stan was nothing more than a conman and a thief. Jack was never able to see what Stan brought to the table, which is odd, because his DC stuff was bombing without Stan so he should have known.