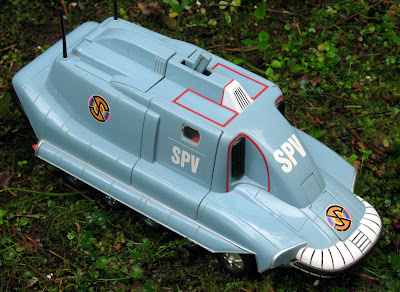 One tends to think of memory's magical kingdom as having fixed boundaries.  Only shadows of the past are allowed residence and interlopers are strictly forbidden.  However, the sentries can be fooled and intruders may sometimes sneak in under the cloak of familiarity if they bear a close enough resemblance to a recognised inhabitant.
"Okay, Gordie, you've lost the plot.  What are you blathering on about now?" you may well be thinking.  Simply this.  If you're around the same age as me, you may well remember the CAPTAIN SCARLET merchandise that was available back in the '60s, particularly the DINKY diecast vehicles like the SPV, MSV, and SPC. (Though nowadays it's usually referred to as the SSC.  Perhaps it was only Dinky who called it an SPC?) 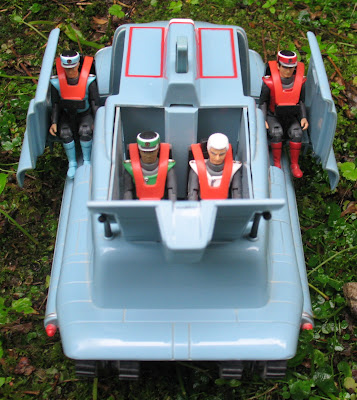 I had all of them - and still retain the set I acquired many years ago as replacements for my originals.  I've had them for far longer than I ever owned their predecessors, although it doesn't actually feel like it.  It's almost as if there's never been a period in my life when I was without them, and that the ones I have today are the very ones I had as a kid; hidden in a cupboard somewhere for all those years 'til I rediscovered them after a long period of neglect.  That's not the case of course, it just seems that way.
However, there are other ways to fool the mind, and here's what I hope is an interesting example of just such an instance.  Back in the very early '90s, THUNDERBIRDS enjoyed a huge resurgence in popularity when the BBC broadcast all 32 episodes on network TV for the very first time.  Previously, back in the '60s (and with most subsequent repeats), they were shown in various TV regions on different days and times.  Amazingly, the '90s screenings were a huge success, spawning a level of merchandise to rival that which was available during the show's heyday. 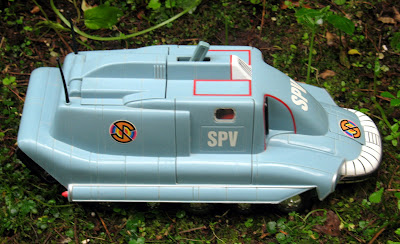 The BBC tried again with STINGRAY and CAPTAIN SCARLET, but met with a more muted response from viewers.  However, having anticipated the same kind of enthusiastic reaction that INTERNATIONAL RESCUE had enjoyed, toy manufacturers launched all sorts of items to tie-in with the expected demand for all things GERRY ANDERSON.
Such an item was the SPV 'play set' by VIVID IMAGINATIONS, pictured in this post.  Now, here's the thing: I obviously bought this as a collector's piece, not to play with - and I purchased it while living in my present abode, with where one would naturally assume I would associate it.  But no, whenever I cast eyes on it, I seem to see myself, as a kid, sitting on the doorstep in the back garden of my old house, playing with this exact same vehicle - even though this specific toy didn't exist at the time and wasn't made until around a  quarter of a century later. 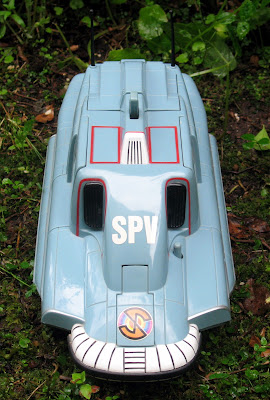 So vivid is the image that it does indeed seem like an actual memory - as opposed to what is obviously merely my imagination (see what I did there?), facilitated by the fact that I associate the familiar design of the vehicle with a particular period from my past.  In short, it's a perfect fit - and seems more at home in my memories of 1968 than of when I actually obtained it.
Funny how the mind can play such tricks, isn't it?  I believe it's called 'false memory syndrome', which is perhaps where 'deja vu'-type feelings spring from.  Anyone got any similar experiences they'd care to share?  Feel free to let loose in the comments section. 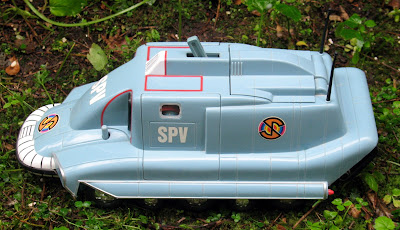 Kid, I know I've been banished to the outer darkness forevermore but if you're interested there was a programme on Radio 4 last Tuesday at 11 am called "Why Time Flies" which investigates how we perceive the passing of time, a subject you've pondered on this blog. I haven't listened to it yet but I will do on BBC Sounds.

I think that would be a normal experience. I bought the 1967 Wham annual a few years ago (1983 ISH I think) and every time I see it im taken back to Christmas 1966 not summer 1983 when I purchased my copy as that's when I associate the book from and was the reason I bought it again. The primary memory superseded the reality ( although I know it's not the 1960s issue). I realise it's not an original from the 1960s but it's imagery your mind sees and I assume it's an almost exact replica.

Your grovelling apology is accepted, CJ, you can get up off the floor now. I'll look for it on iplayer. Thanks.

I do that all the time with replacement items I buy, McS - it becomes (in my mind) the actual item I originally had. However, none of the other, smaller, '90s SPVs create a 'memory' of having played with them in my old house, so I don't know why (for sure anyway) this particular one does. I can actually 'remember' sitting on my back step with this toy. It's a bit of a mystery. Sure, the familiarity of the design might explain things, but if so, why not with the smaller SPVs by the same company? Doh.

But the original larger 1960s version is the one that triggers the memory, the smaller one isn't the same thing For me that's like a replica/ facsimile comic. The original Green Lantern/ Green Arrow issue 85 ( drug issue) takes me right back. As my original copy is falling apart I picked up the I picked up the recent replica but it wasn't the same trigger as an original. When I reread my tattered original I was back in 1972 for that lovely nano second . Glad Colin's back, that Radio 4 prog sounds interesting I will check that out on Sounds

I think I might not be fully understanding you, McS (or vice versa). The big (around 14 inches) SPV in the photos came out in the '90s, but I have pseudo-memories of playing with it in my back garden in the '60s. Yet that doesn't apply to any of the smaller '90s SPVs by the same company. I'm assuming that, with the big '90s toy, it's because it's a '60s design (as in based on the one in the TV show), so I'd assume the same thing should happen with the smaller '90s SPVs - but it doesn't. Essentially, I'm 'remembering' having a particular version of a toy that didn't actually exist in the 1960s in that form. I just find it weird.

Can I ask seriously have you ever played with your toys as an adult. I bought some Matchbox cars in a play set for a friends grandson recently and I'm ashamed to say I had a wee play with them. It wasn't the same of course but I had this "need" to do it. Ah sorry I though it was the new version of the 60s toy that was triggering your memories. Looks to me like your just a bit weird Kid 😁

Weird? Hey, I've got a certificate. As for playing with toys, no, not really, because, at our age and even behind closed doors, we're just far too self-conscious to be able to re-create that sense of natural innocence that kids have when they're playing with toys. Have I skidded a car along the carpet as an adult though? Of course, because when I first reacquire a toy from childhood, I try to recapture the feeling of what it was like when I first had it.

The difference is that when you're a kid, you can play with a toy car (or whatever) for hours, whereas, as an adult, a few seconds or so of re-creating a childhood moment is more than enough. Like I said, I'm all too aware of exactly what I'm doing and why I'm doing it, so it's more a case of being able to gaze at the item and just remember when I first owned it that's the 'thrill' for me - it's more like an ornament than a toy.

Actually, Kid, I do genuinely apologise - it's your blog and you can discuss whatever you want on it. I've regretted my stupid remarks for the last week but it's nice to be back again :)

That's nice of you, CJ - we'll let bygones be bygones. Actually, what annoyed me about your comment was that it sounded a bit aggressive and that always sets me off. However, perhaps it was just frustration on your part about me going on about something again.

If you like rum, CJ, you'd be better sticking to Old Jamaica chocolate bars. They've made yet another comeback - stock up now.

I always thought the Spectrum Persuit Vehicle was too incumbersome for Persuit . I reckon the Spectrum War Machine was a better name. It looked so slow in fact in my prime I reckon I could have out run it. It reminds me of a giant tank.I recall when it came into action the shed it was parked in was nearly always demolished driving it out. Guess the shed must have been built around the SPV.

Yeah, makes you wonder why they didn't just built the sheds big enough to simply drive the SPVs in and park them, eh, LH? I suppose it was because it looked more dramatic the way they did it.