THE FIRST OF A MARVELLOUS NEW SERIES - STAN LEE PRESENTS...

Hi there, culture lovers, this is Stan Lee here.  I'll be appearing on 'Crivens!' from time to time to yak about some of the great comics I worked on with my fellow collaborators.  Y'know, the place I'm hanging out now since my passing is extremely comfortable and I guess I could just spend my time loafing about on clouds and playing my harp, but I know how much all you true Marvel Maniacs will be missing me so I thought I'd keep in touch.  I'm not usually one for plugging the characters of the Distinguished Competition, but similar to Deadman (though he does it with humans), my essence pops into my 8 inch Mego action figure in order to be able to communicate with you.

First up is Thor The Mighty, who made his debut in Journey Into Mystery #83 back in 1962.  Jack Kirby claimed to have created him, and he certainly came up with the look, but my brother, Larry Lieber, always wrote 'full script' and 'twas he who came up with the name Don Blake and Jane Foster (Jane Nelson in her first appearance), which is at odds with Jack's version of events.  So Larry wrote the tale, based on my plot, and Jack illustrated it from my brother's script.  Had the Jolly one created the character and his secret identity, he'd surely have named him, not left it to Larry.  (Hey, Leave It To Larry sounds like a great title for a TV show.)

Of course, pre-Marvel, Jack had played with the character of Thor a couple of times in the past in one-off tales, but apart from the design of the hammer, none of his earlier versions resembled Marvel's mallet-swinging hero.  For those who say Jack's design of Mjolnir proves he created the character, well, actually all it proves is that Jack created the look of Thor's hammer, whichever Thor it happened to be - DC's or Marvel's.  However, seeing as how 'King' Kirby came up with the visuals of our strip, and later contributed a great deal to the plotting, often coming up with the plots himself with only a little occasional tinkering from me, then he certainly deserves the title of co-creator.  I didn't do these stories by myself, and neither did Jack; we both relied on the Bullpen's talented inkers, letterers and colourists to help breathe life into our little fables.

I guess it's always possible that Jack and I discussed the idea of doing Thor before I gave the plot to Larry, or it might even have been Jack's suggestion to start with (though it could just as easily have been mine), but neither of us could swear to it either way with total certainty.  Let's just say that when it comes to creative rights, yours truly, Jack, and Larry all deserve a measure of credit in birthing our version of big daddy Odin's favourite son.

Well, that's it for now true believers - I'll yak with you all again in the very near future.  Right now I'm off over to the next cloud to watch Sam Rosen re-letter the ten commandments in English; nobody could letter quite like Sam - though I hear a Scottish laddie I once met in Glasgow comes pretty durn close. 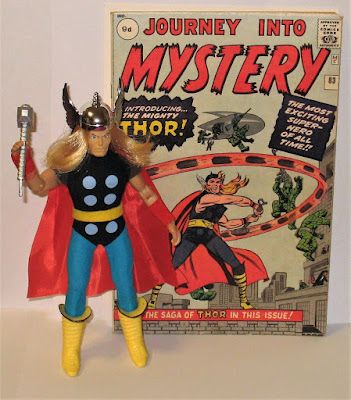