When younger, I sometimes bought comics that I was really too old for.  Comics like Little Star, Seven, and Yogi & His Toy.  Strangely, I also bought football comics like Shoot and Scorcher, even though I was never into the 'beautiful game'.  I guess I just liked buying new comics.  Almost 50 years ago I bought my original copy of the one above, which was the Summer Special for the aforesaid Yogi comic.  I received its replacement today, and it's with a sense of amazement that I realise three dogs (Prince, Tara, and Zara) at different times graced my family's household between me buying my first copy and purchasing its stand-in.  (The third dog, Zara, died in 1998.)

Is that significant?  Not to you, but I'm used to often being able to say when I replace a long-lost comic that "I first got that one when we had Prince" (or Tara, or Zara), so to acquire a comic with absolutely no doggie-association in my life is a bit of a strange feeling.  Only because, with this particular Special, we got our first dog only around 6 or 7 months later (when I no longer had the comic), so it's not too far removed from the timeframe of my family's doggie ownership.  In the case of much earlier comics, the time between buying them and getting our first dog is much greater and therefore doesn't really 'connect' in my mind in the same way.  (Although now that I'm aware of it, it might do so from now on.)

I really hope I'm explaining myself coherently as I find conveying precisely what I'm trying to say extremely difficult sometimes due to 'brain fog' caused by a medical condition.  Anyway, in short, this comic comes from a time when I was 'Douglas' (dug-less - get it?) and that's never really quite registered with me before.  It predates my status as a dog owner and, consequently, seems to transform an already lengthy nigh-50 year period into an even longer one.  Having waded through all that, you may now be either relieved or disappointed to learn that it's not really relevant to what this post is about.

No, I wanted to show you what can be done with a comic that's in less than pristine condition, using the seller's photos in comparison to my own once I'd performed a little 'work' on it.  There was a time when I'd have given an inferior condition comic like this one a miss, but I've learned to grab 'em while they're going in case a better one never comes along.  So the premise of this post is quite simple.  I'll show you the before and after photos just so you know that even imperfect comics can be greatly improved if you know what you're doing - and I flatter myself (well, who else is going to?) that I know what I'm doing when it comes to salvaging old periodicals from the scrapheap of history.

Ready?  Then let's go!  The above cover is the after, the one below is before.  The rest of the images are presented in before & after sequence. 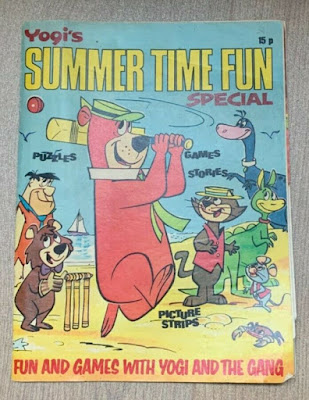 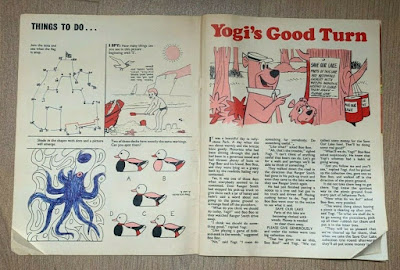 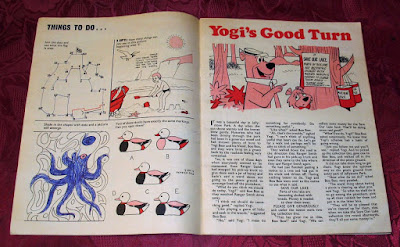 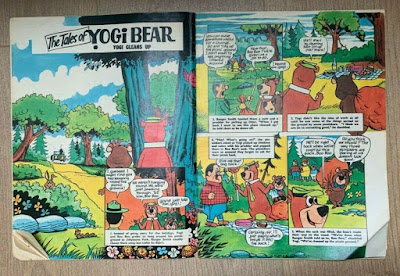 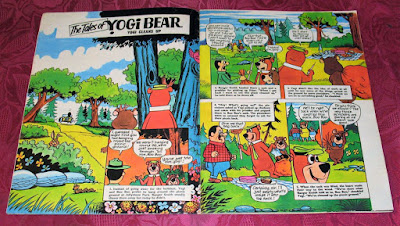 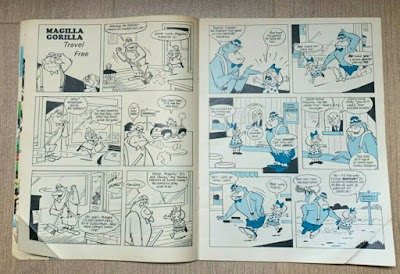 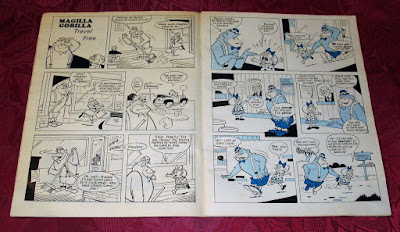 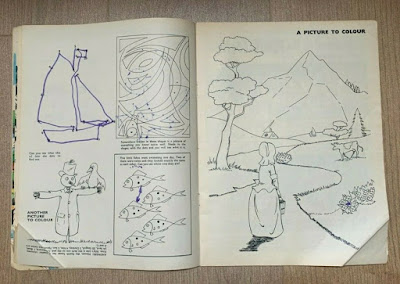 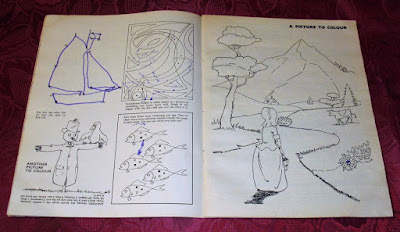 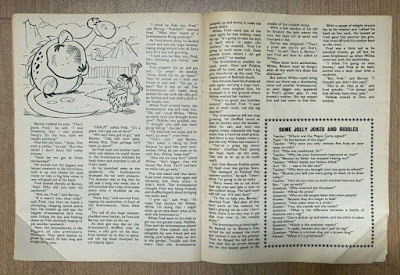 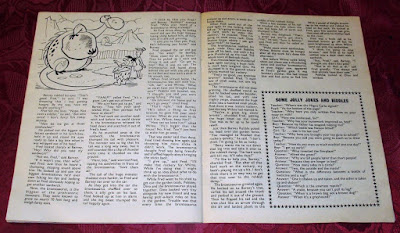 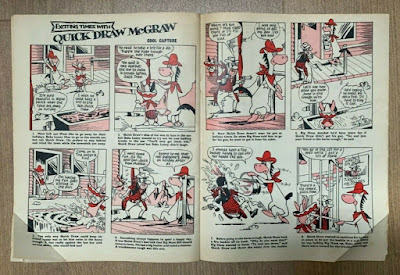 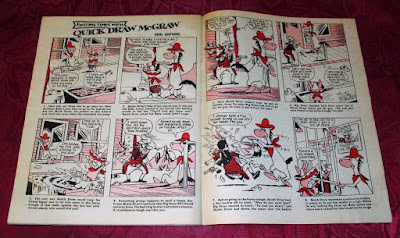 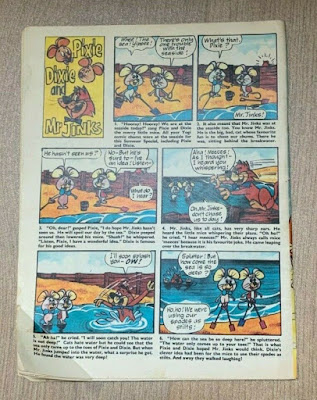 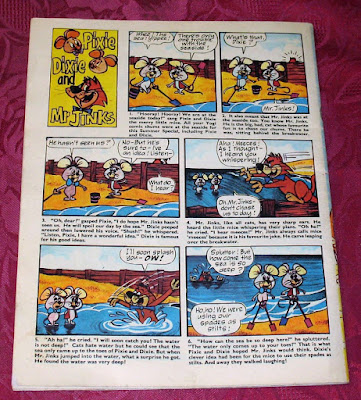 And in case you're interested, below are my three dogs who never saw me read this Yogi Summer Special on account of me not keeping it before we got our first canine chum.  (None of them ever met, but the photos of each pet were taken within a few feet of the same spot in our back garden.) 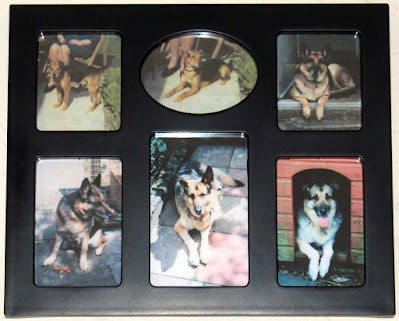 I can certainly see the improvements, Kid, but it would be interesting to know HOW you achieved them!

During my childhood years there were two sisters who lived near me called Louise and Mary-Lynne whose grandmother owned a dog called Prince - or I thought he was called Prince but I eventually discovered his name was actually Prints.

Wow! Did you iron the comic? The colors seem so much brighter after your "work."
And on an unrelated note, I hope you feel better soon and your brain fog lifts and dissipates. I recently had an abscessed tooth that needs to be removed next week. Nothing is worse than not feeling your best. Take care and again, what a great restoration on good old Yogi!

Just imagine, CJ, that his full name was 'Fingerprints' and he was just called Prints for short.

Actually, LM (and CJ), I wet the creases, then ironed them with a bit of brown paper over the top so as not to damage the paper. The brighter colours are really just down to me having a better camera (I assume) than the seller.

Thanks for the good wishes, but unfortunately I'll never feel better due to my condition being congenital - though it never kicked in 'til some years back. That's life.

I think you did well finding such a good replacement. Most of the second hand comics I tend to find have either part of a page torn out or strawberry jam rubbed into a page no doubt after someone's breakfast toast and jam and the common moustache drawn on a few characters. A few creased pages is pretty good 👍

The creases ran all the way through the comic, LH, but the seller only showed a selection of them. I showed the same ones after I'd lessened the creases, so it's far less worn-looking than it was. I could do without the filled in puzzles though. I suppose I could paint them out, but it's too much work for a comic that only cost me a measly few quid. I've only ever seen it for sale twice in recent years, so it doesn't seem too common, but if I ever see a better condition copy I'll snap it up if it isn't too expensive.

There's a feast of nostalgia about kids' TV on BBC Four tonight - two documentaries, one about Oliver Postgate and the other called 'The Golden Age Of Children's Television' plus episodes of Bagpuss, the Clangers, Ivor the Engine and an episode of Blue Peter originally broadcast on November 4th 1974, a mere 12 days before I acquired POTA #5, my first ever Marvel comic!

I'll try and catch the documentaries, CJ, and the Blue Peter episode. I've got complete DVD sets of the other shows, so I can watch them whenever I like. Ta.