Hi gang, Stan Lee yakkin' with you again as promised last post.  Up here in the Heavenly Hills, I'm having a great time, but I miss my ol' Soapbox days, which is why I occasionally 'inhabit' my Mego 8 inch action figure so that I can communicate with all you Marvel Maniacs.  This time round we'll take a look at the Invincible Iron Man, as well as the fallibility of human memory (especially yours truly's).
At one time, both Jack Kirby and Don Heck seemed to think that Jack did the layouts for the pages of the very first Iron Man story.  It later turned out they were both mistaken and that Don had drawn Shellhead's origin story in TOS #39 all on his lonesome.  Don may've been confused by Jack pencilling Tony Stark's alter-ego's second (and fifth) appearance, which Don inked.
However, it's said that Jack designed the Iron suit as seen on the above cover, but I have a notion that covers were drawn after the contents (though they went to the printers weeks or months in advance), so if Jack designed the armour, perhaps he did it before producing the cover.  Just a guess of course, but that doesn't mean it ain't so.  (Doesn't mean it is either.  Hey, I like to be fair.)
Jack wasn't very consistent in drawing Stark's armour (especially the joints), and he gave him a cannon shell-shaped head with no chin.  However, Don had drawn the helmet with a chin when he illustrated the first strip and therefore tweaked Jack's pencils at the inking stage to reflect that.  Whoever designed the suit, it was Don's version that was the more impressive and 'realistic' looking one.
As with Thor, I supplied the plot, though I have no idea if I talked things over with Kirby before handing it to my brother Larry to do a full script for Don to follow.  Larry came up with the name of Tony Stark, avoiding the alliteration that I was prone to, which is why he wasn't called Tony Tanner, Samuel Stark, or Anthony Anderson.  Yep, there's no doubt about it, Tony Stark is a much better name for a millionaire playboy in the '60s.  Larry, ya did me proud.
Anyway, that's it for now.  Gotta dash for my monthly memory competition with Jolly Jack (yep, he's up here too) to see who misremembers the most from those early days of the Marvel Age of Comics.  It's usually a draw, 'cos we're both as bad as each other when it comes to recalling exactly how things happened.  We both did something right though, whoever did what, which is why these characters are still around in the 21st century.
'Nuff said! 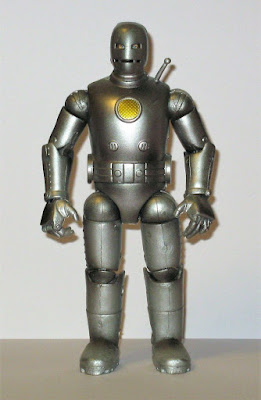