THE MOST FANTASMAGORICAL POST IN THE HISTORY OF BLOGGING (NOT)... 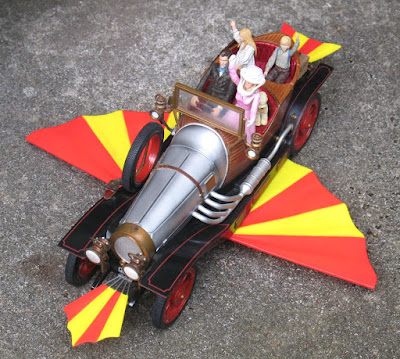 Around 15 years or so ago I bought a huge Chitty Chitty Bang Bang car.  The chassis is around 14 or so inches from 'tip-to-toe', but closer to 17 if you include the front and rear wings.  Articulated figures were also available, but it was mainly the car I wanted so I didn't bother buying them, figuring I could pick them up later if I changed my mind.  Which I did (change my mind that is*), but never saw them again anywhere, so Chitty was left driverless and without passengers until only recently, when I managed to acquire Caractacus Potts, Truly Scrumptious, Jeremy, and Jemima on eBay.  At last, I thought, now my car is complete.  Incidentally, the car is almost as light as a feather, even with the figures in it.

(*Okay, who's the wise guy who said I should've changed it for a better one?)

Only thing is, the female figures, despite having poseable legs, are hindered in their movements by their vinyl dresses, and the driver (modelled after Dick Van Dyke) is prevented from fitting his legs (with my help of course) under the steering wheel, so isn't quite a perfect fit as the back end of his bum sits a little above the seat.  Only the boy is able to be positioned on the back seat in the right position, whereas the girl has to stand, as does Truly.  Never mind, it's still a far more impressive item with the figures than without and it's great to finally have it as it was meant to look.  (The car was also issued with a chrome-plated bonnet as in the film, but, just like the figures, I didn't buy it when I had the chance.)

So although it's by no means certain that this particular post will attract much interest or many (or even any) comments, I thought I'd share some photos of the car with my fellow Crivvies.  Hopefully some among you will enjoy seeing such a great item.  Incidentally, it's amazing how often this movie is credited in TV listings as being a Disney film, and a large slice of the general public seem to be of that opinion too.  However, it's an Eon film, based on the book by Ian Fleming and produced by Albert R. Broccoli.  The fact that the songs for both movies were written by the Sherman brothers probably led to the confusion, with Dick Van Dyke's presence no doubt helping to reinforce that impression too.

I've placed one of my Corgi models next to it in the last three photos, just to give you a better idea of the size.  That's the main Corgi car, not the smaller Husky or Juniors one. 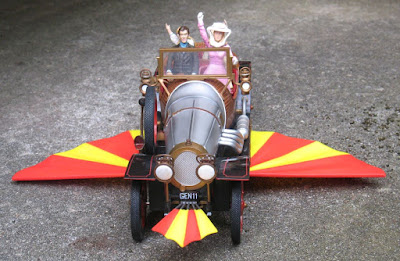 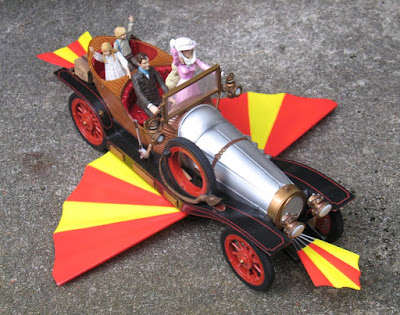 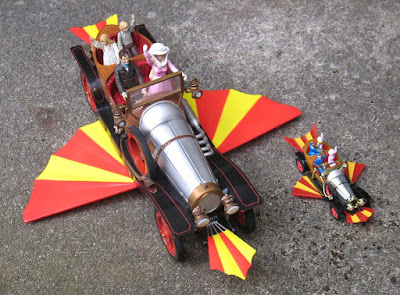 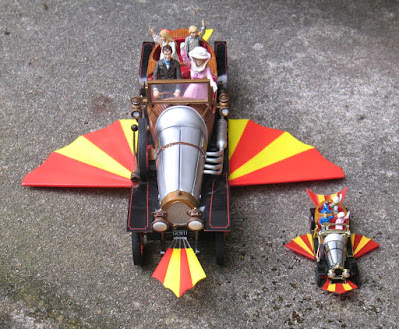 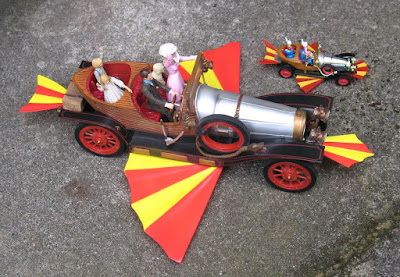 Nice looking model. I had no idea it come out in a large form. Must agree though it looks complete having the four figurines. A question ...Do the side wings work in the same principle as the corgi model or are they permanent fixtures ?

I had the original car in the 1960S and loved it. It must have been expensive as I remember my mum and dad not letting me be too boisterous when playing with it (we raced our cars when I were a lad) .I also thought CCBB was a Disney film, strange how you assume these things.

The Corgi car was reissued three years back, McS, and is available direct from Corgi for just under £25. Go on - recapture your childhood before it's too late. Or buy one for the missus. Better yet, get her to buy one for you.

Nah its not my sort of thing now Kid. I would certainly consider a Matchbox car from the 1960s with the box (but not at the high costs they are asking) .

Bargains always to be had when you keep your eye out for them, McS. And Chitty would grow on you - it's so colourful. You could just regard it as an ornament and enjoy looking at it.

At the time the movie was released I can't say I enjoyed it much, mostly because I thought Benny Hill was pretty irritating. The saving grace of the film was Lionel Jeffries.

This however is an impressive model which raises one question in my mind: Which version of the car has the most accurate depiction of the wings as clearly the large model and the Corgi one are quite different in that respect.

That's a harder question to answer accurately than one might realise, T47. I'd have guessed that the bigger car would be more accurate on the grounds that the extent of the Corgi version's wings would be limited by having to fit inside the body of the toy. However, having just checked online, the car in the movie appears to have 'angled' wings the same as the Corgi model. Having said that, however, the photo/illustration used on posters and merchandise seem to have wings more like the SEG (bigger) model.

Great model. I had a small version but I recall the wings flipped out when I pressed a button. Chitty came to my home town in the early 70s and I think that is when I was bought the model. I remember crowds lining the streets and drawing Chitty at school afterwords.

That's the Corgi version you had, M. That's it next to the big one in the last three photos. I got my photo taken in Chitty when it came to my home town around 14 or so years back. The photo is on the blog somewhere.

That’s good to know, Kid. I might have a look for one. I’ve been buying annuals and books from my childhood the last couple of years so I might expand that to include models.

I've now added the photo of me in Chitty to this post to save anyone having to trawl through the blog. Yeah, M, Corgi reissued Chitty in 2018 and is still available from them, so check out their website. Some sellers are also selling it on ebay, but although some prices are okay, some are ridiculously high. Corgi are also reissuing the AM DB5 in a replica of its original box, so another one to look out for.