Hi gang, Stan Lee, inhabiting his Mego 8 inch action figure, back to rap with you again.  I should probably have kicked-off this series with an affectionate look at The Fantastic Four (after all, they started the Marvel ball rollin'), but better late than never.  Y'know, some people have asserted that the alleged similarities between the FF and DC's Challengers Of The Unknown prove it must've been Jack Kirby who came up with our Cosmic Quartet and that I had nothing to do with it.  Let's take a look at those so-called similarities.

1) There are four members in each group.

2) Both groups survived plummeting from the sky.

3) Both strips were drawn by Jack Kirby.

From my point of view, the first two are superficial and are outweighed by the differences, which are...

1) The FF had superpowers, the Challengers didn't.

2) One of the FF was a woman, whereas the Challengers were all men.

3) The Challengers survived a plane crash which should have killed them, whereas the FF's rocket returned safely (if roughly) to earth once the automatic pilot took over.

4) The Challengers didn't know one another before the crash, whereas the FF were friends before undertaking their space flight.

Also, it was surviving a crash which should've killed them that motivated the Challs into undertaking their adventures; with the FF it was being transformed by cosmic ray-endowed superpowers which inspired them to band together as a team - not quite the same thing.  There might be other similarities and differences, but that's enough to work with for now.  My point being that I think any comparisons made between the FF and the Challengers in an attempt to ascribe total creative authorship to the same man are exaggerated and don't stand up to scrutiny.

Also, the FF came about because my publisher, Martin Goodman, tasked me with creating a group that would cash-in on the success of DC's Justice League Of America, which was proving to be a popular hit at the time, so there was a specific reason as to why they came to be.  The FF mag wasn't just some casual creation, randomly churned out on a whim to see what might stick - it was a specific response intended to capture a slice of the relatively recent re-emerging market for comicbook superheroes.

The fact that a re-envisioned Human Torch was part of the group suggests that Martin Goodman (or myself) might have at first wanted to use some of our back catalogue of Timely's heroes.  It may well be that Captain America (maybe Bucky as well) and Sub-Mariner were among those considered for inclusion before I (possibly with some input from Jack, possibly not) came up with the line-up as seen in the published mag.  There had already been an attempt to revive the aforementioned wartime heroes only a few short years before which hadn't been the success we'd hoped for, hence, possibly, that idea being abandoned.

My synopsis (below - click to enlarge) for the first issue still exists (no surprise that some of my critics doubt its authenticity), but I simply can't recall whether or not I'd already talked things over with Jack before typing it.  However, there are aspects of it that Jack changed at the drawing stage, and the Mole Man section may well have been entirely down to the Jolly one.  Though again, we might have discussed it at some point prior to Jack drawing it, just can't remember.  Things like that just didn't seem important at the time - we were all too busy doing it to dwell on it.

However, once the series was well under way, Jack assumed a more creative input into the plots with only minimal 'interference' from me, though I'd say my editing, scripting, and characterisation, along with occasional plot tweaks, were essential elements in why the mag became so popular.  That's why, when divvying up the credits, it's in no way a disservice to either of us to regard myself and Jack as co-creators of 'The World's Greatest Comic Magazine!' 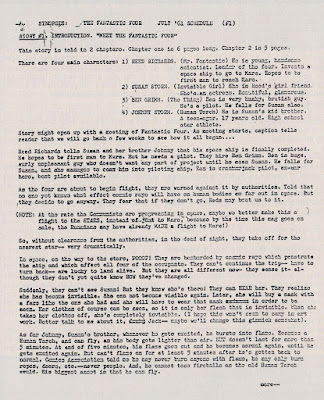 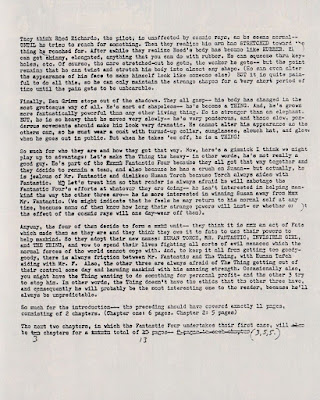 It never even crossed my mind that the Challengers of the Unknown and the FF were in any way linked. As you (eer sorry as Stan) says there are very few similarities between the two strips and any connection between them is (IMHO) mischief making re the linking them to the creation of the FF.

I think it's a case of some people imagining what isn't really there in an attempt to to down Stan and big up Jack, McS. As you say, mischief-making.

I think that there is an assumption amongst some comic fans that the artist creates most things simply because they draw the characters. Err is that an original FF number 1 or a facsimile?

It's a '60s reprint from a Golden Book & Record Set, McS. It came with an LP dramatization of the story, which I've also got. I've shown the comic on the blog before.

Great posts Kid. Loved Marvel comics as I grew up and read all these in British Marvel in 1972/73.Managed to get some of the originals over the following years but the magic was in the first reading with green pages and red pages as background in Mighty World of Marvel.Happy memories. Stan Lee was the driving force for Marvel and he knew the value of Jack Kirby and from a child's perspective he never shut up about how great Jack was! With all the arguments that have filled the last 40 years it is easy to forget that all the Marvel bulletins and adverts that Stan oversaw hyped Jack to the hilt..... he really did seem to understand what an asset he was. Also both must have been workaholics considering the volume of comics produced and the office/production team that Stan led.Stan earned his place at the top table by hard work and personality but he had Jack right beside him. They were the greatest team in comics!!! Keep up your great work mate.

Pretty much agree with everything you say, Triple F. It's doubtful that Jack or Steve would have such a cult following if it hadn't been for Stan shouting their names from the hills. Keep up the great comments.