So there I was, sitting on my grandparents' itchy red bed-settee (of which long-time readers will perhaps already be aware) one Sunday afternoon back in the mid-'70s, perusing #1 of DC COMICS new monthly title, STALKER.  I remember buying it in R.S. McCOLL's, either that day or the day before, and I'd taken it with me to pass the time away.  I probably had other comics along with me as well, but though I likely associate them with that red settee on an individual basis, I don't connect them either to one another or even that particular Sunday.

As far as I know, there were only four issues, and I remember only having the first one, but all that's about to change - more on that in a moment.  At some stage (could've been months, could've been two or three years) I gave the ish to a pal, only to have it returned to me over 30 years later, in pretty much the same condition that I'd given it to him.  (At some stage before giving it away, I'd added 'invisible' tape to the spine to reinforce it.)  Stalker was created by PAUL LEVITZ and STEVE DITKO, the first also being the writer, the second also being the penciller, and WALLY WOOD made three, being the inker on the mag.

I recently saw numbers 1-4 on ebay and purchased them, so when they arrive, I'll add the covers for your personal perusal, but to kick-start the post, I've included a cover scan of the original comic I bought way back in 1975.  A lot of water's run under the bridge since then, but I can still recall reading it on that itchy red bed-settee all those years ago as if it were only a week or two back.  Like I say, there were only four issues, so when I get my grubby mitts on them, I'll read them in one sitting and thereby complete a task begun a whopping 44 years ago.

It's always satisfying to eventually finish something that's been waiting to be completed for any length of time, and this occasion will be no exception.  What about the rest of you?  Are there any comics series that you started as a teenager but never got to finish, though you'd like to now as an adult?  Tell all in the comments section.

Okay, the issues have now arrived and been added, along with splash pages, to this post.  I've also read all four of them (though despite my aspiration, not in one sitting as I kept falling asleep), and if you're interested in my verdict, I'll be more than happy to tell you.  The first ish sets up an interesting premise, but #s 2-4 fail to deliver, being quite tedious and repetitive, with the story being told mainly through captions rather than dialogue.  One gets the impression that writer Paul Levitz hasn't mapped it all out in advance and is simply making up each individual episode as he goes along. Surprisingly, I found myself underwhelmed by the Ditko/Wood art, which is merely okay and not the 'knock you out of your socks' masterpiece that you'd expect from two titans of the comicbook medium.

Would it have improved if it had reached issue 5 and beyond?  On the strength of the first four, I don't think I'd have continued buying it back in the day so I'd never have found out!  If you bought, read, and enjoyed the title when it was first published and disagree with my assessment, feel free to tell me in the comments section. 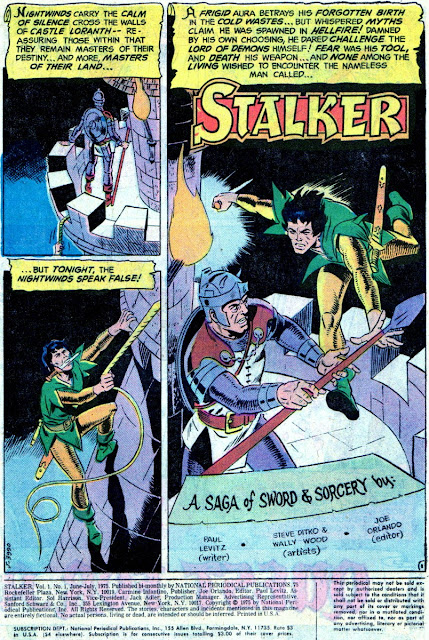 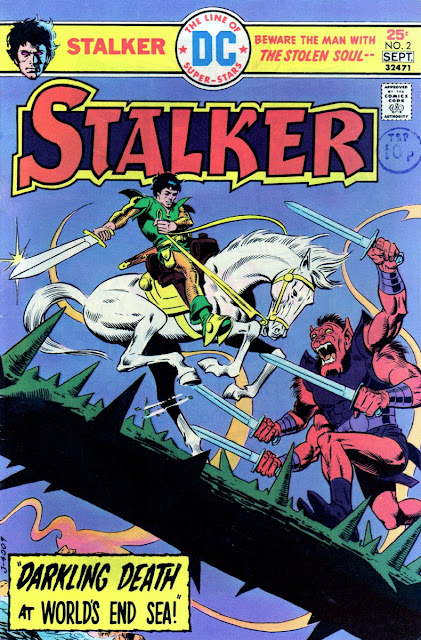 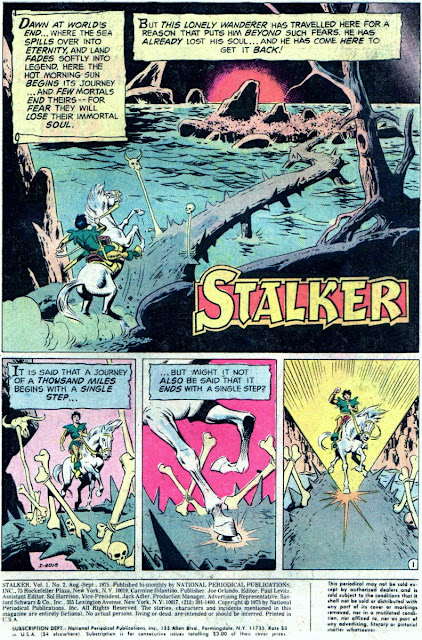 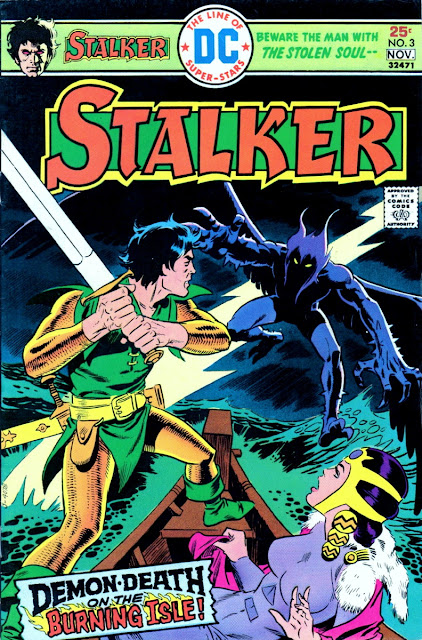 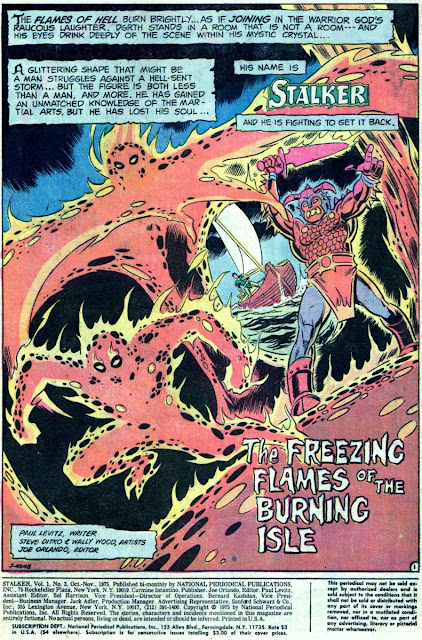 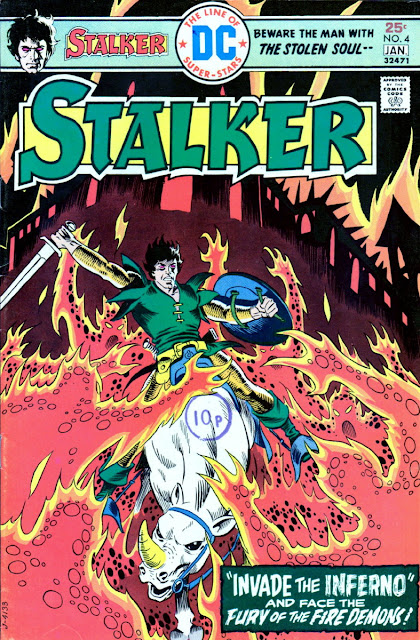 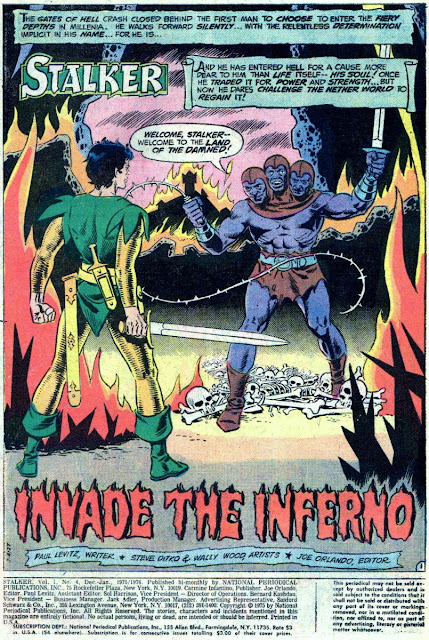 Let's finish how we started.  Here's the cover to the duplicate copy of #1 which I've just received, and look - no 'invisible' tape down the spine. 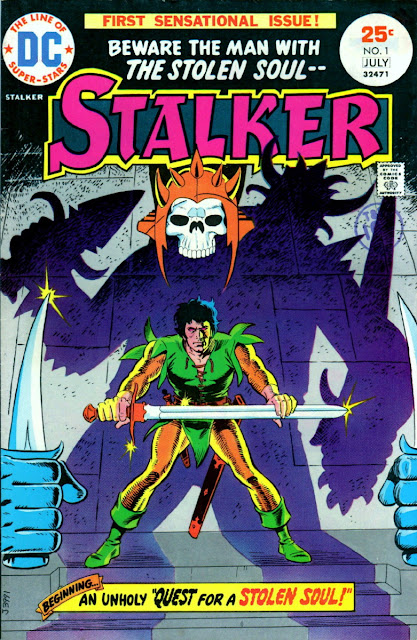 My needs are relatively modest - ask Sybil - there's one issue and a special of Twisted Tales I need for the set. A set that I'd love that doesn't fall within your question (cos I wasn't a teenager but a 7 year old) is Fleisher's run on the Spectre in Adventure. I know they were reprinted as Wrath of the Spectre, but I loved the 7 Soldiers of Victory back-ups too. The obvious question is, "Well why don't you just go and buy 'em then?", and I don't have an excuse. Maybe having something missing is important? (Don't ask Sybil!). I think it'd be awful feeling if you completed everything and only had new stuff to look forward to...

Well, 'tis said it's better to travel hopefully than to arrive, HS, but I think it's more awful to have incomplete sets than complete ones. If I completed everything, I could then sit back and enjoy it all. I don't want to get the final comic I need to complete a series, only to fall off the twig the next day. I want to have everything for ever such a long time before I pop my clogs - an event which I'm hoping won't actually ever happen. (It pays to be positive - I hope.)

By the way, I asked Sybil - she just laughed.

Yeah, ol' Syb does seem to laugh a bit too much. I tell myself I've probably just got the helium/chloroform mix slightly off but why that should make her point and laugh, I dunno...it's probably amazement or summat...
Has it occurred to ya that it's the thrill of the chase that keeps you clutching onto your perch? What if The second the final comic-shaped jigsaw piece is opened, your software beeps 'complete', and you peg out?
I'm convinced that it's the enthusiasm for, and the pursuit of this stuff that keeps us younger (and smarter) than the average bear!
Is a complete collection what we really want?

I'm not sure how that helium/chloroform mix would affect her over Skype, HS, when she's in my room laughing at you on the 'phone, but she's asked me to tell you not to call her anymore. She says I'm the only man she wants or needs.

Nah, I'd rather plug the gaps, then have the thrill of the chase acquiring new collected editions of comics that I've already got, or wanted at the time they first came out.

So a collection with no gaps is what I'm after.

The instance which first came to mind was when I was able to at long last read all of the Nightmaster saga from Showcase. I was surprised when I looked up my old post that it's been nearly ten years since I filled in that gap. Time flies indeed.

I don't think I've ever been aware of the character, RJ. I'll consider tracking down those mags for my own collection. A few others ahead of them in the queue though.

The STALKER series got a sort of faux conclusion when James Robinson retooled the character into a villain for an involved JUSTICE SOCIETY storyline.

Yeah, I read a little about that on Wikipedia. I was working on updating the post when you submitted your comment, GP, so I hope you get to see the added covers and splash pages.