Compulsion is a strange thing, don't you think?  It's a 'force' that comics collectors (or collectors of anything, come to that) suffer from, driving them to acquire items they already have in slightly different form, and which they don't really need.  Case in point, the above MARVEL MILESTONE EDITION of DOCTOR STRANGE from 1995, which arrived this morning.  I already have a similar issue included with a Doctor Strange articulated figure, the main differences being a '60s pin-up serving as the cover and the interior pages being printed on more traditional, non-glossy comics paper.  However, the story pages are the exact same (aside from the image size being slightly smaller), printed from the same source as the one above.

I've also got got around another eight different printings of the above tales in different formats, so I needed the Milestone Edition like a hole in the head, but I couldn't resist the siren call to purchase this version when I saw it on ebay recently, and add it to my other issues in this particular series.  Although I'm usually a great believer in reprints being exactly as they were first presented, I must say that the re-colouring by ANDY YANCHUS (done originally for the first edition of the MASTERWORKS volume) on these four tales is probably far more 'atmospheric' than the original colouring, though there's some overly-thick panel border 'restoration' in places by unskilled hands, which is slightly annoying.

Anyway, there it is - another comic that I don't really need, but am no less glad to have.  No, I can't quite explain it either - just put it down to that strange thing known as compulsion, which we probably all have in some form or other.  I never saw this issue 24 years ago when it first came out otherwise I'd have bought it then, so perhaps I'm only putting right something that didn't happen - but should have - nearly a quarter of a century back.  One for the philosophers to ponder perhaps?

Below is the 2004 issue of the same strips, included with a '1st Appearance' articulated figure of Dr. Strange.  The cover would've looked better had they removed the 'pin-up' banner and enlarged the good Doctor's name, but obviously that would've required a little work.  Guess it was done on the cheap, eh? 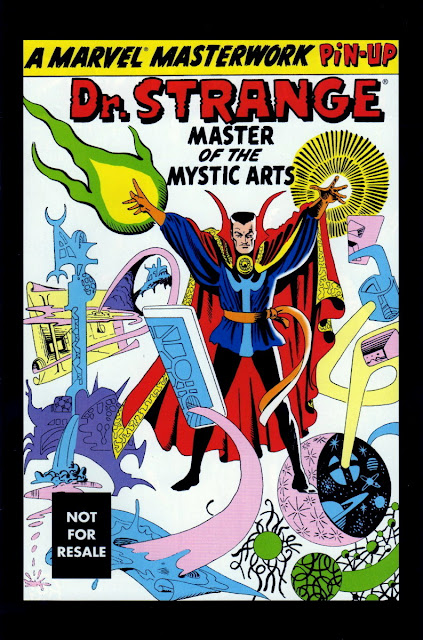 Your house must be like the Tardis - much bigger on the inside so you have no problems storing all the stuff you can't stop buying :)

I've mentioned previously that my town centre now boasts a comics shop and I've been buying issues of the new Savage Sword Of Conan - but when the e-book collection of these issues is available I'll be buying that too.

I've got plenty of space to store stuff I suppose, CJ, but only if I pack it away in boxes and store them in the loft, which doesn't really allow for ready access. I might well buy a collected edition of the new Conan mags myself, but it'll be a softcover volume as e-books do nothing for me. I prefer to have the 'real deal' - to hold as well as read.