The cover above comes from the interior of a FAMOUS 1st EDITION reprint of SUPERMAN #1 (though the comic itself was un-numbered), published by DC COMICS in the late '70s.  (The reprint that is, not the original.)  I eventually had a few copies of this issue (some sold without their cardboard covers by Glasgow news-vendors), and, inevitably, I cut one up to stick the cover and various panels on my bedroom wall.  (This was obviously before the days of home scanners and printers.)

That was nearly 40 years ago, and it was only around a year or so back that I replaced the faded, wrinkled, and mottled original with a brand new copy, printed from a scan of one of my two other issues of this mag which have been in my possession since almost as long as the one sacrificed to adorn my wall.  I was gazing at it earlier this evening when, from deep within the innermost recesses of my mighty mind, a memory was resuscitated, a recollection that I am now about to relate to you.

You've read about 'Bob Billens' on Crivens! before - or, at least, you have if you're a regular, long-time reader.  That's not his real name, but it's close enough for anyone who knew him to recognise him should they read this.  As I've recounted before, I once worked in my local Central Library for about six months, where I met a summer worker who was also into comics.  That was Bob.  One day, he asked me if I'd seen this particular reprint, and I replied that I'd seen it advertised, but never laid either hands or eyes on an actual published copy.

Bob said he'd bring his copy in to show me, which he did a day or two later.  As I was leafing through it, I noticed that several pages near the back were creased in a sort of 'half-rip', the result of a fault in the ream of paper they were printed on.  I pointed this out to Bob, but he dismissed it as unimportant, as that was the way it had left the presses, it wasn't a later infliction.  Bob considerately offered to order one for me from his supplier in Bournemouth, so I duly handed across the cash and waited patiently for its arrival.  What a top bloke, I thought, going to all that bother on my behalf when he didn't have to.

When it arrived and was handed over, I noticed it had the exact same damage to the exact same pages as his copy and good-naturedly 'challenged' him about it.  "I see you've kept the copy I paid for and substituted your own for it," I said, but he denied it, and seemed a bit huffy at the suggestion - but it was an affected display of huffiness, not a genuine one, so it was obvious that he had indeed 'pulled a fast one'. Now call me a thicko (woaaahh, not all at once), but it wasn't 'til sometime later that it occurred to me that his offer to procure me a copy was merely so that he could deliberately effect such a switch - it wasn't a later spontaneous decision.  Otherwise he'd simply have given me his supplier's address and let me order my own.

What a b@st@rd, eh?  Thing is, I couldn't prove the 'switcheroo', so had to let it slide or risk the friendship.  (Some friend, eh?)  I've always been a wee bit wary ever since of anyone volunteering to do me a 'favour', as I've found that, often, it's more themselves they're intent on doing a favour for, rather than me.  It's not always 'built-in' at the time like the event I've just described, it can be a later development. You know, they'll offer to sub you a pound if you're short at the till when buying your shopping, then a week later, they're asking you for a loan of a tenner.  (Never seems to happen the other way around.)

So always beware someone offering to do something for you, seemingly out of the goodness of their heart.  Sometimes, of course, the offer can be completely genuine, but other times there's a catch - which may not be obvious to you at the time. "There's no such thing as a free lunch!" is the old saying, and if I had a pound for every time I've found that to be true, I could dine like a king at least once a week.

Oh, and in case you're interested, below is the cardboard cover (front and back) to the reprint itself, which is a faithful facsimile except for its size. 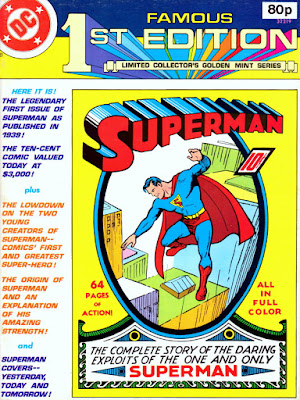 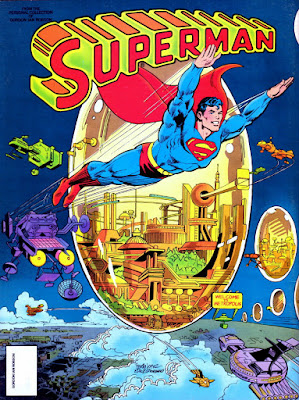 Don't trust folk who work in libraries, Kid - that's a motto I live me life by! :)