GLIDING ALONG ON THE CREST OF A CLOUD (IF SUCH A THING IS POSSIBLE)... 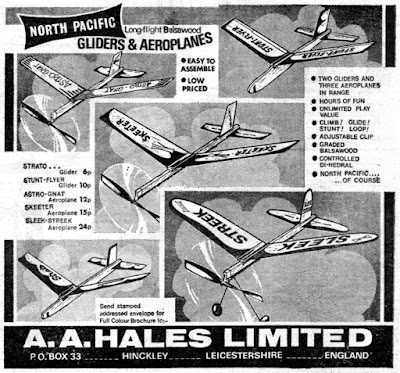 I was looking through a 1974 issue of VALIANT & LION earlier and saw the above ad for balsa wood gliders, which took my mind back to around 1963 when I had the STRATO one pictured on the lower left-hand side of the picture.  Actually, it had started life as my brother's, but he bought a new one when his first one 'came a cropper' so I inherited it and got him to repair it for me.  In fact, we probably had a few of them between the two of us over a certain period, and seeing this ad immediately transported me right back to a specific point outside my house in the neighbourhood we lived in at the time.

It prompted me to look on ebay, and I saw one and immediately bought it.  That's the seller's photos above and below.  It's been opened, but is in brand-new condition so I can't wait 'til I get my hands on it.  Another part of my childhood re-acquired.  I was surprised to see that the gliders were still around in 1974, because I have no recollection of ever seeing them again after the mid-'60s, though at some stage I also had the SLEEK STREEK model pictured on the lower right of the ad, next to the Strato.  In fact, I've added a photo of one from ebay at the foot of the post.

Did any of you Criv-ites ever have one or more of these balsa wood gliders when you were a kid?  Then why not share your happy memories of them with the rest of us in the comments section?  When my glider arrives, I'll assemble it and add a photo of it to this post, so check back in a couple of weeks as it's coming from America. 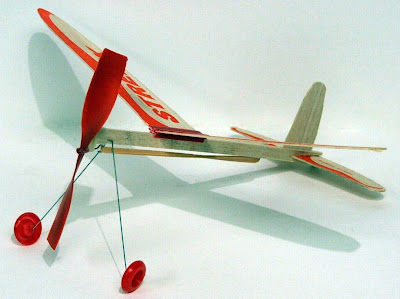 I don't recall ever having one of these gliders but I look forward to seeing your finished model. I did however win a Silver Surfer kite at seaside bingo in the 70's, which I was absolutely thrilled with until Dad and I managed to crash it into a tree branch on it's maiden flight. Not so much stranded on Earth with poor misguided humans as trapped up a tree with some worried squirrels! Oh well, a happy memory nonetheless...

You should take a look on ebay, HS. You never know - you might see a replacement for that Surfer kite at a reasonable price. Did you buy your original after watching Mary Poppins?

Ah, I thought you and your dad might've been inspired by the 'Let's Go Fly A Kite' song at the end of MP. I'd have looked so clever had that been the case.

My people find that film very offensive because of the vile stereotypes it perpetuates... these lazy depictions of Native East Londoners have helped to hold us back for years. Sure, we do like sweeping chimneys, but we're not all chirpy and don't keep bursting into song all the time. Well, some of us do, but thanks to positive discrimination initiatives we now work in a wide range of professions. Some of us are working to get films like Mary Poppins banned, or at least get one of those daft warnings put on screen before they're shown.

At least they got an actor with a 'spot-on' Cockney accent in Dick Van Dyke. Just think how awful the movie might've been if his accent hadn't sounded so convincing.

Yeah, they all moan about 'blackface' and minstrel shows. What about Americans playing Cockneys? They don't realise how emotionally scarring THAT is!

Nah, I was being serious - Dick had that Cockney accent nailed. Even more convincing than James Doohan's Scottish one, which was ace.

No doubt people will pounce on me for my 'ignorance', but I never understood the later stushie over the B&W Minstrel show. Black people weren't being made fun of, they weren't being disrespected, it made them look as if they were all good singers, and it was a thoroughly entertaining and hugely loved show (at the time). Yet Lenny Henry, who 'whited up' for his 'Hollywood' movie, is currently bleating on about how demeaning it was for him to be part of the programme. Here's an idea, Lenny - maybe you should just have said no to it.