HI THERE, MY NAME'S STEVE - STEVE SUPERMAN... AND I'VE GOT AN IDENTITY CRISIS! CAN YOU HELP?


I think it was JOHN BYRNE - way back in the mid-1980s when he (and others) revised SUPERMAN's origins in the wake of the CRISIS On INFINITE EARTHS series - who first posed the question as to why anyone would ever suspect that Supes might have a secret identity.  Sure, it was traditional for masked heroes (and villains) to have other identities - that's why they wore masks to conceal who they really were - but KAL-EL didn't wear a mask, so why would anyone suppose he might be hiding who he really was - or even that there was a 'really was' to hide?

Although Byrne's reasoning seems logical at first, it begins to disintegrate when you think about Superman's early years.  (His 1930s early years, that is - when the whole idea of LOIS LANE suspecting CLARK KENT of being Superman was first introduced.)  To begin with, Supes was a vigilante wanted by the police.  Nobody knew his name (it didn't take a genius to figure out that it was unlikely to be Superman on his birth certificate), nor did anyone know where he lived, so he obviously didn't gad about in his costume all the time.  If he did, it wouldn't be hard for the cops to trail him back to his house after his weekly shopping trip to the supermarket and try and arrest him.

Therefore, he most likely had another name, but was obviously keeping it a secret. Presto!  That's a secret identity right there.  And he must've had a place to live which nobody knew about, so he was a figure who, as far as his everyday existence was concerned when he wasn't leaping about in his 'work' clothes, was concealing his true identity from the world.  Even when he started having a better relationship with the authorities, he never said "Call me Steve" (or whatever) in response to anyone addressing him as Superman.

However, Byrne's version of Supes was never a vigilante, so let's just allow, for the sake of discussion, that no one would have any reason to imagine he had another identity.  First though, I'm not convinced we're on solid ground going down that route, because if he didn't disguise himself in his 'off' hours, his neighbours would've been bound to cash-in on the fact by selling their story - "We're Superman's Next Door Neighbours!" - with photos of him sitting out in his back garden in a tee-shirt and jeans.  But let's pretend otherwise.  Let's just accept that no one ever looked at Superman and thought that he might become someone else when he hung up his cloak at the end of the day, or wondered about where he lived and what he did when he wasn't catching criminals.  (And to be fair, it wouldn't have occurred to them on his first few public appearances - but eventually they'd have started to wonder.)

However, that's not how the whole Lois suspecting Supes being Clark came about.  It was the reverse of that - she looked at Clark and realised that he bore a resemblance to Superman - and that he was never around when Supes was (and vice versa).  Well, you can't have one without the other, obviously, because if Clark is Superman then the reverse is also true.

What about SUPERBOY then, when he was retroactively fitted in to Clark's continuity and history?  Surely no one had any reason to suspect him of being other than who he was?  Au contraire.  People knew he must live in SMALLVILLE, but not precisely where - and they also knew that they'd never seen him attend school in his costume (or any other outfit).  He surely had to have a disguise then, and was hiding amongst them.  To me, it seems the most natural assumption in the world for them to make - within the confines of a comic designed for kids.

I therefore propose, my learned Criv-ites, that it's consequently not quite the stretch of imagination that Byrne suggests it to be (if it was him) to assume that Supes would've had a 'civilian' identity.  To me, it would seem even more unlikely if he didn't.  Anyway, what's your own opinion on this topic, readers?  Feel free to voice your view in the comments section.  You don't even have to do so under your real name - you  can use your secret identity.  (All the best people have them.) 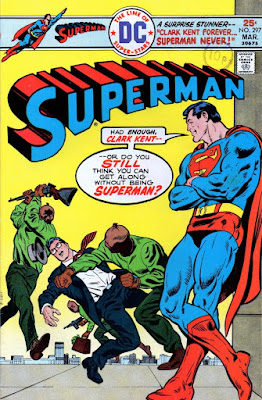 I don't know much about Superman (me being a Marvel addict) but didn't he have a base at the North Pole or something? He could have flown down from his base every day to do good deeds then flown home again - no need for a secret identity and no neighbours to shop him to the press.

His Fortress Of Solitude was a later development, CJ. However, what I'm talking about is whether or not it was reasonable for people to assume he MIGHT have a secret identity, not whether he actually DID have one or not. So, even if he didn't have a 'civilian' identity, it still wouldn't be unreasonable to assume that - given the circumstances of his early appearances - he might have. Unless, of course, people knew for a fact otherwise.

Well, if this bloke appeared a few times in reality, I think that people would naturally wonder what he does during his spare time. But would someone in 1938 with no knowledge of superhero conventions? Seeing a fella fly for the first time would be as odd as seeing a UFO, but because he appears to be human you'd be curious as to who he is/was. I'd always assumed his reason for the secret ID was because he loves humanity, was brought up with it's values so wouldn't want to abandon the pleasures of social interaction to become a full-time god. It's that grounding and ability to relate to normal folk that stops him just taking over.
Check out the recent movie Brightburn...it's basically Superboy meets the Omen. Had shite reviews but I loved it. Great gore too for horror hounds!

You're probably right to a degree, HS, as to his reasons for maintaining a secret identity, but that's a later rationalisation. As to people being unaware of superhero conventions in 1938, don't forget that Zorro and The Shadow, etc., were the 'super' heroes of their day. I still think that it's not unreasonable to (eventually) wonder if a vigilante wanted by the police, but who doesn't wear a mask, with no 'real' name and seemingly of no fixed address, might be hiding under an alias when he wasn't catching crooks and avoiding the police.

Must confess, PS, that your comment made me wonder if you'd read the post properly, because I think I proposed some pretty good reasons as to why it wasn't unreasonable for someone to wonder (within a relatively short space of time) whether Superman MIGHT have another identity.

He didn't wear a mask, but he WAS a vigilante wanted by the police. His real name wasn't Superman and nobody knew what it was or where he lived. It would be assumed that he had a birth certificate with his real name on it, but he wasn't telling anybody what it was. He clearly didn't walk about in his costume all day, so he wasn't Superman 24/7 and presumably had some sort of life outside of crime-fighting.

Also, even in 1938, the idea of human-looking rubber masks was an accepted concept in pulps and other media. Perhaps he was wearing such a mask, which was why the police didn't know who he really was and why they couldn't trace him? So let's recap, shall we?

No one knew what Superman's real name was, where he was from, or where he lived. How did he manage to evade detection? Clearly he MUST have had some sort of life outside of being a superhero, but nobody knew what it was. Although it wouldn't have been anyone's first thought to think he might have another identity, eventually they'd have started to wonder.

What's his name, where's he from, where does he live, what does he do when he's not righting wrongs? Nobody knew - it seemed like a secret. "Hey now, there's an idea..." Byrne's suggestion that no one had any reason to suspect that Superman could be someone else seems logical at a superficial level (no pun intended), but simply doesn't withstand the application of a little thought.

It seems to me that the possibility of the vigilante known as Superman having another identity (which was unknown and unrevealed (hence a 'secret') is an entirely reasonable thing to assume. Eventually.