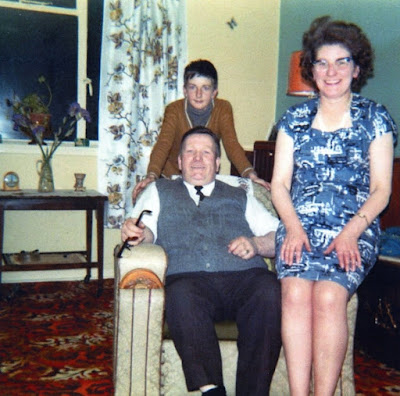 Largs, 1971.  During a fortnight's holiday, I bought three things that I yet remember to this day.  Not necessarily in the order acquired, I purchased a witch keyring, a cheap ACTION MAN knock-off (in a deep sea diving suit, I think), and a little plastic deer.  The last two items were bought in the same shop though not necessarily on the same day, the first item's place of purchase is beyond my ability to recall.  Oh, and I also remember buying at least a couple of issues of KNOCKOUT, a comic that had only come out in June.

So where am I going with this you may be wondering.  Well, in previous posts, I've posited the idea that if we live somewhere for several years, and buy something only a year or so before moving, in retrospect it feels that we had that something for the entire time we lived there, not just the latter stages of our occupancy.  That's because we associate the item with the place, and as we lived in the place for years, the association feels of equal duration.  That make sense to you?  That's how it often seems to me anyway.

But there can be exceptions - kind of.  I was surprised to learn that a BEANO I associate with my current house in September of 1972 was bought in my previous home in February of 1971.  I was amazed to discover (upon re-aquiring the issue around three years back) that I must've owned it for at least a year and seven months, though goodness knows how long I had it beyond that.  Until I saw the date on the replacement, I assumed for years that I'd bought it only that week or the week before in September of '72.  (If you're interested in that story, see here.) 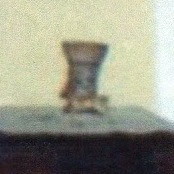 Same goes for that little deer bought in Largs in June or July of '71.  I mainly associate it with my previous home, but there it is on the card table in the top photo, taken in July of '72.  (It's to the right of the flowers in front of a little vase - see close-up above.)  I'm staggered to learn that, at that point, I'd owned it for just over a year, as I just never thought I'd had it for so long.  How long did I own it in total?  Couldn't say - could've been another week, another month, or another year, but I just don't remember.

And that's it, I'm afraid.  All I wanted to say was that I'm sometimes staggered to realise that I had something for far longer than I thought I did, just as I'm equally staggered to learn that something I feel I had for yonks, I actually had for no more than a few days. (Like the first revamped 1969 issue of SMASH!  For that story, see here.)  Don't get me wrong though;  on a conscious level I know I had that Smash! for only around 3 or 4 days, but on another level it feels that I had it for far longer than that.

So readers, wanna play?  Is there anything that you once owned which, thinking back, seems like you had for longer than you actually did, or (conversely) something which feels like you had in your possession for a far shorter period than you seem to remember?  If that makes any sense to you, astound us all with your recollections in the comments section.
Posted by Kid at Thursday, December 20, 2018

Nothing that I can add in terms of your experience but on a kind of similar note - thanks to the sheer volume of material on the internet, either turning up in recollections such as yours of being offered for sale I am quite often reminded of possessions that I used to have, lost over time and since forgotten that I even owned until I see an image of them again. Case in point recently were the toy robots known as Zeroids. I think that there were three or four of them and their display racks / recharge stands also doubled as vehicles for them. Had a quick look online and they are a tad too expensive if I ever wanted to own one again.

Ah, Zeroids - never owned one, PC, but I remember them well. I recall the ads, and a classmate bringing one of the three Zeroids into school one day and teacher letting him show it to the class. As you say, expensive things, but maybe one day, if my Lottery numbers come up, I'll add them to my collection. I saw something on eBay the other day (forget what it was now) and it looked vaguely familiar, causing me to wonder if I'd ever had one as a kid. Funny the things we forget, funny the things we remember.

When I think back to childhood belongings, I feel as though I owned everything at the same time, which clearly wasn't the case.

I know I owned a single Zeroid at one point, I bought it at a vastly reduced price in the local Woolworths as it was unpackaged. It had its little pedestal thing though, and shutters which could be pulled across its eyes.

Not quite on topic with what you asked, but since you mentioned holiday purchases, I'll bore you with this anyway: in 1986 in Blackpool, I bought the US Transformers issues 19 and 20. I read the UK weekly series at this point, and these two issues hadn't yet been reprinted in the British comic. The very fact that I was reading what from a UK perspective was comics from the future blew my mind, and I re-read those issues even more than I normally would. Of course that meant that a couple of months later when the UK series got round to reprinting them, I had 4 weeks where the UK comic lost its lustre a bit for me, as I already knew the stories word for word!

Still, TF:UK had some amazingly good back up stories at the time, Hercules, Iron Man, Machine Man etc...

That's how it seems to me when I look back - it feels like I had all my toys (and comics) at the same time, though I know I couldn't have had, as some would've been nothing more than memories by the time a new one came along.

Talking of Transformers, DS, I think I lettered a few episodes of the UK comic, and I may have done something for one of the Annuals, but that was 30 years ago and I'd have to check before I could say for certain. I think they're up in the loft, so I'll keep an eye out for them next time I'm up there digging through some boxes.