THE 'GHOST' OF CHRISTMAS PAST... 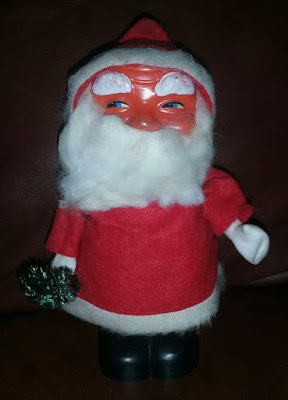 Let's say it was 1970 - though it could have been 1969 or 1971.  It's hard to be precise after so long a time.  I bought a SANTA CLAUS figure containing sweets, scoffed them, and then used the figure as the Christmas ornament it was intended to be.  I bought it from a shop called CORSON'S, which still existed up until February of this year until the owner (who I remember working in the shop as a teenager when it belonged to his parents) retired and sold the premises, though it still operates as a convenience store.

But that's by-the-by.  If I remember correctly, the plastic bottom half of the Santa got heat warped (maybe I sat it too near the fire - can't quite recall anymore), and it was reluctantly dispensed with after a while.  When I was down in Southsea in December of 1978, I saw two of them in a shop window, but they were there only to provide festive decoration and weren't for sale, being the personal property of the shopkeeper.  I tried to talk him into selling me one, but he was resistant to my offers of mucho money.

I saw another one on ebay just recently and considered bidding on it, but I got distracted and it was sold before I could make an offer.  However, I 'borrowed' the seller's photos and I'm sure he won't mind me using a couple of them here.  I'll keep an eye out for another and make a bid should one come up, as I continue in my quest to re-acquire things I once had and would like to have again.  (It's good to see my old Santa though, even if only in a photograph.)

Did you ever have this particular Santa, readers, and do you have any seasonal reminiscences about it that you'd care to share with the rest of us?  If so, the comments section awaits your visit. 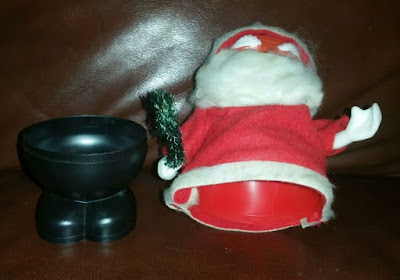