GONE BUT NOT FORGOTTEN... 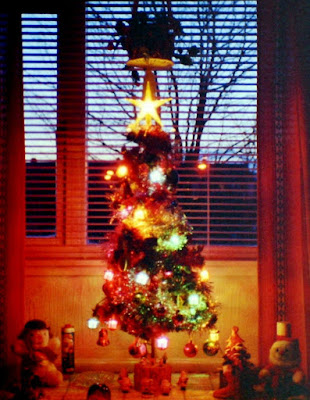 It's funny the things we remember long after the fact.  The Christmas tree I put up in my living room on the 1st of this month is probably older than I am.  In every house I've ever lived in, it's served its festive purpose faithfully.  It's around 4ft high, and its branches are supposed to bend up against its 'trunk' to facilitate fitting back into its box.  However, it's been many years since that's happened, for two very good reasons.  Namely, the wire branches have long been too fragile to withstand bending without breaking, and the box was discarded sometime in the early '80s because it was redundant.  After all, what's the use of a box if you can no longer fit what came out of it back into it?

It wasn't my decision.  One year the box was still there in the loft, the next year it wasn't.  I suspect it may have been thrown out when we moved house in '83, but it could've happened up to a year or three before this.  It had been a familiar object whenever I was in the loft, all through my childhood and right up into my 20s, and it's difficult to believe that it's now been gone for longer than we had it.  In fact, whenever I go into the loft, I'm still sort of half-expecting to see it, as it's so embedded in my consciousness as one of the loft's inhabitants.  Daft as it may sound, I miss it when its absence once again registers with me.

So, dear Criv-ites, is there something that your family once owned which, in the back of your mind, you feel is still around - until you look over to its once-accustomed place and are suddenly reminded that it isn't?  Some fondly-recalled item from your childhood and/or teenage years whose presence yet remains long after its physical departure?  If you're even half as bonkers as I am, there's bound to be, so share your memories of it in our comments section.

(And, in case you were worrying or wondering, my Christmas tree now has its own black bin-bag in which it resides [unfolded] between yuletide gigs, to protect it from the loft's less-than-tropical conditions.)
Posted by Kid at Friday, December 07, 2018

I had a box of badges when I was young that I've no idea what happened to, and I'd love to be able to see again. Strangely, a lot of them were alcohol related, as most of them were promo items given to me by a relative who worked in a pub.

There was a Whyte and Mackay whiskey badge, a Schweppes one (which said Buy Me A Drink And Prove You're Not A Rotter), a prismatic yellow Superman badge, which I think showed Supes flexing his chest and bursting out of some chains, one with the slogan We Are The People on it (which might give people an idea of what football team I supported) and a Secret Lemonade Drinker one too.

I don't think I ever wore any, and I couldn't tell you how many times I cut my fingers on the pins while rummaging through the box, but I'd love to have those back again, especially the Superman one, which I think I bought myself.

Incidentally, Kid, I was listening to some of the more obscure parts of my music collection recently, and a lyric jumped out at me from a song called La Di La, a solo song from the late 70s by Ian McLagan, the keyboard player out of the Faces. The lyric was 'I read every Lee and Kirby comic book, but it's fantasy, and now that Superman has made a movie, no-one reads his magazine'.

Can't be too many songs which mention Stan the Man and Jolly Jack!

I've got a box of badges somewhere, DS, comprised mostly of ones that came free with UK comics, but funnily enough I'd never wear a badge for some reason. As for that song, I'd be surprised if there's another that mentions Stan & Jack. Remember Paul McCartney's song, Magneto & Titanium Man? I used to have a friend who was into comics - more DC than Marvel - and I remember him telling me that the Crimson Dynamo in the song's lyrics was the Flash. I politely pointed out that, no, it was the Crimson Dynamo, who was a Marvel character. He didn't like being wrong and sulkily remarked "Huh, you're more into Marvel than I am anyway!" He tended to look down on everyone, so the fact that I knew more about something than he did stuck in his craw.

I've heard OF the McCartney song- I think Stan himself mentioned it in a Bullpen Bulletins page once- but never actually heard the song itself!

I'm now starting to dream up other songs that could mention comic creators- You Can Call Me Al Williamson, maybe? Jumping Jack Kirby Flash? Or how about the Elvis song, Marie Severin's The Name of His Latest Flame? I'll stop now.

And don't forget Tiny Tim's Ditko Through The Tulips.