SMASHING IDEA FOR A COVER GALLERY? 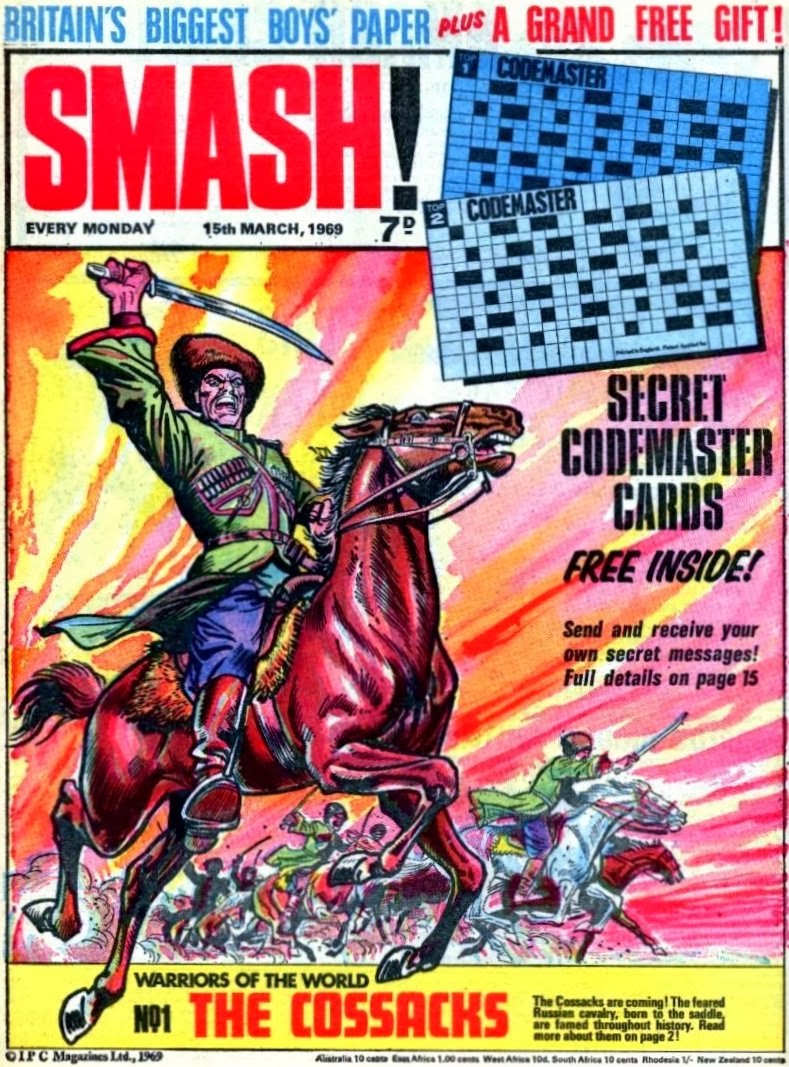 What do BOB HOPE, JOHN LOWE, and the first issue of the
revamped SMASH! comic from 1969 have in common?  The answer
is that around 29 and a half years ago, on October 13th, 1984, I met Bob
Hope, saw John Lowe make history by scoring the first televised 9 dart
finish, and re-acquired the first issue of the 'new' Smash! I'd first bought
in March of 1969, then sold to a classmate a few days later.  (For
that tale, click here.  Go on, I'll wait right here for you.)

On that day in 1984, I was in Edinburgh to attend the legendary
Mr. Hope's show at The Playhouse, and stopped in at a comics shop
in the late afternoon to have a browse.  There was a box containing 72
issues of the 95 issue run of the new Smash!, so I bought them all on the
spot.  I took #1 away with me, plus two '50s movie mags which Bob auto-
graphed that evening, along with a couple of LP covers from recordings
of his old radio broadcasts.  (In case you were wondering, I was sitting
in a bar having a soft drink before the show and watched Big John
score his 9 dart finish on the pub telly.)

As for those remaining issues of Smash!, I arranged to pick them
up from the dealer when he attended a Glasgow comic mart the next
week, I believe.  (Incidentally, that mart was the one  at which 2000 A.D.
offered me freelance work as a lettering artist.)  If so, I seem to recall that
the dealer forgot to bring the comics with him, which means I either got
them at a subsequent mart, or through the post at intervals.  (Of course,
I could be misremembering after all this time and perhaps it was a
later mart the dealer told me he'd be attending anyway.)

I've picked up 21 of the missing 22 issues over the intervening
years and, yesterday, obtained the absent ish (second-last one) from
Amazon, and am currently wishing my life away until it safely arrives.
It's taken me practically 30 years to complete the set since I re-acquired
that first issue in Edinburgh on that day in October of 1984, but you
know what?  It only seems like a few years ago at the very most.

So hands up if you'd like to see a cover gallery of the revamped
Smash!?  Better yet, why not let me know in the comments section.
You know how I look forward to hearing from you.
Posted by Kid at Thursday, February 27, 2014

I loved darts back then when the game took off on TV, and, although others might not agree, John Lowe's 9-darter was one of the great sporting highlights from that time. Mind you, it seems so long ago now that it needed you to remind me of it, so -- thanks for the memory, Kid.

A pleasure, GB. After all, that's what this blog is all about - jogging people's memories of yesteryear. Yup, I got the Bob Hope allusion.

I agree those Smash! covers were really striking and memorable, they would make a nice gallery. If you have any Valiants from the years 1963/1964, you may wish to check them out to refresh your memory because quite surprisingly the majority if not all of the Smash! covers in the Warriors of the World Series were in fact redrawn versions of Valiant covers from that period. Putting both versions side by side would make the gallery even more interesting.

I remember reading years ago that the Smash! covers had originally appeared in (on) Valiant under another title, but I'd assumed it had been the same artwork used in both cases, not that they'd been redrawn, so thanks for that, Irmantas.

Unfortunately, I didn't start buying Valiant until TV21 was merged with it ('though I may have an odd issue from earlier than that), so I'll not be able to do a side-by-side comparison. Still, great idea.

Feel free to use my upcoming Smash! scans if you don't already have a full set.

If you have them all I would prefer and LOVE an Odhams Smash gallery . And Wham and Pow.

I've got near-enough full sets of Smash! and Pow! (and a good number of Whams!), but unfortunately they're in bound volumes and can't be opened wide enough to scan. (They're the Odhams file copies.) However, I also have some loose copies that I can show, 'though there might be the odd gap or two. They're bound to pop up on the blog in the fullness of time.

My favourite UK originated comic so I would love to see the covers (got a few of them but not a lot)Might as well push my luck and ask if we could see a few of the strips inside like "Sams Spook" ,"Swots and Blots" etc if possible?.............please they are so good !!!

I'll see what I can do, McScotty. The first ever Sam's Spook can be seen on the post 'The Steady Strands of Sun...Phew!'