In the Winter of 1974, DC COMICS' newest magazine hit the stands - The SANDMAN.  Penned by JOE SIMON and drawn by JACK KIRBY, I'm unsure whether the decision to make it a regular series came before or after the first issue debuted.  When issue #2 appeared, it was scripted by MICHAEL FLEISHER (as were all subsequent issues) and drawn by ERNIE CHUA - who used to draw under the name of Ernie CHAN.

With #4, Kirby assumed the regular art chores on the book, but it only lasted another two issues before being cancelled.  The final issue featured the inking of WALLY WOOD, but Jack's pencils were far too abstract by this time for even the magic of Wood's inking to be able to transform them in the way he had with CHALLENGERS Of The UNKNOWN back in the '50s.  There were some nice little touches here and there, but, overall, the art was unremarkable.

The first five covers were drawn by Kirby, the last by (Ditko-ish) BILL DRAUT, but none of them really qualify as memorable masterpieces of (then) modern comic art.  Jack was just churning it out by this time, and it wouldn't be too long before he was back at MARVEL.  However, the covers are an interesting reminder of a particular time in the history of comics-publishing, and nothing by Kirby is without merit or deserves to be ignored. 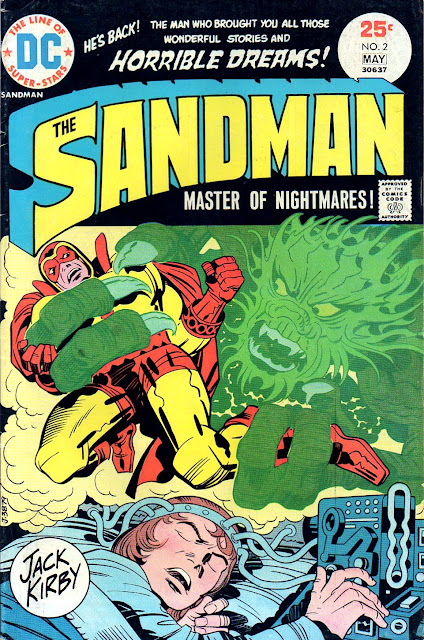 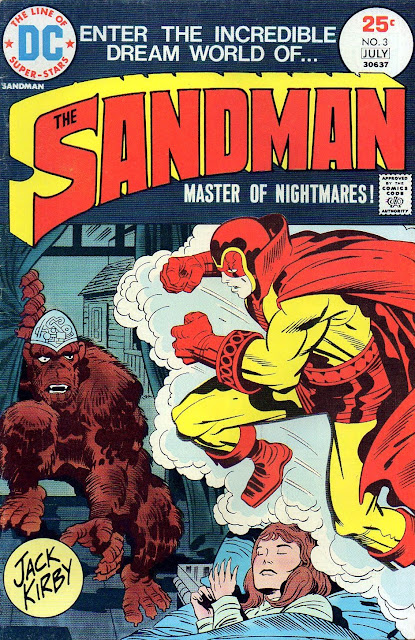 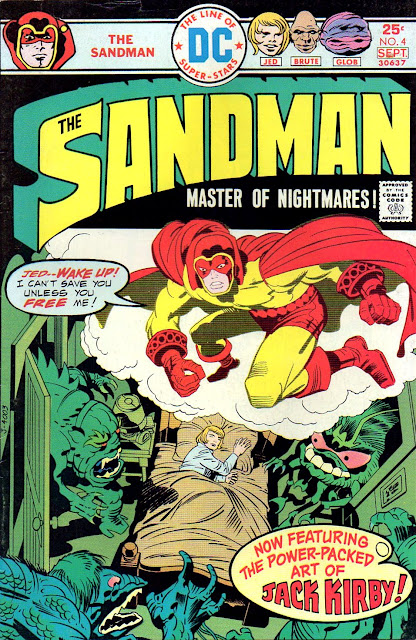 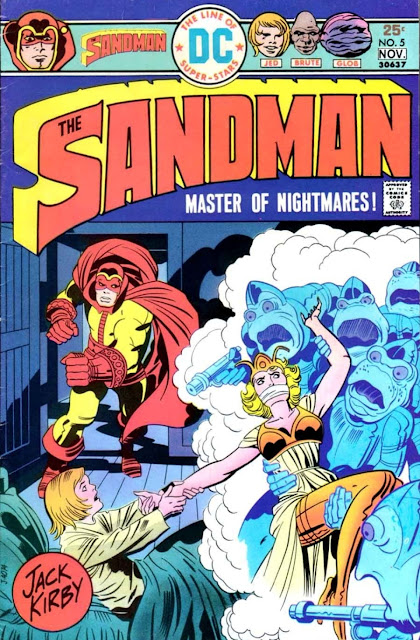 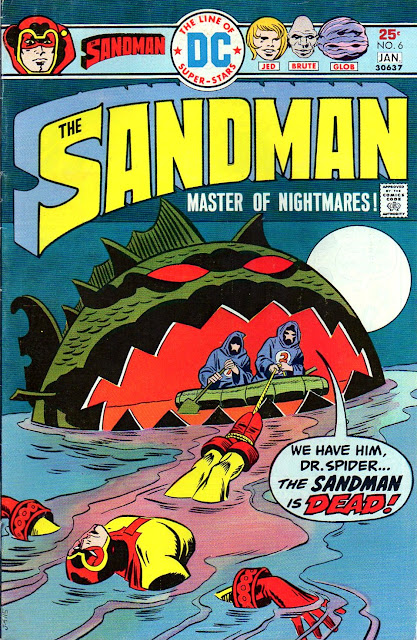 There was one more Kirby-penciled appearance of this version of The Sandman.
"The Seal-Mens' War on Santa Claus", originally scheduled for Sandman #7 (cancelled due to the "DC Implosion") and finally published in the digest-sized BEST OF DC COMICS #22

Kirby's name may be on it, but the cover of No 5 looks more like the work of Steve Ditko to me. It actually reminds me quite a bit of the work he did on DC's Stalker for their mid '70s sword and sorcery line.

Thanks for reminding me of that, Britt. Was Sandman on the cover, do you know?

R.W., I've stared hard at that cover since reading your comment, but I just can't see a hint of 'Ditko' in it, stylistically speaking. It looks too-typically '70s Kirby to me. I did like the Ditko inked Kirby art from the '60s 'though.

BTW, the Sandman appears only on the back cover of Best of DC #22, rendered by George Perez!
http://thefifthbranch.com/images/oldies/blueribbon/blueribbon_christmas_back.jpeg

RW Watkins,
Sandman #5 is Kirby pencils.
Sandman #6 is belived to be Bill Draut pencils and Wally Wood inks (which would explain the "Stalker" feel you mention, since Wood inked Ditko on that series.)

Britt, thanks for the extra info, I've amended the post. Various sites credit the cover for #6 to Kirby, but I'd once read somewhere it was by Ditko, hence my naming him. However, looking at it closely, I'm now no longer sure who it was by, so Bill Draut could well be the man - especially as he was listed as cover artist in ads for the mag at the time.

R.T., if you meant cover #6 (not #5), then I'd agree - that's why some people (inclluding myself) believed it was by Ditko. Britt's suggestion makes a lot of sense.

You know what, there's something about 5 that made me think Ditko too, can't quite put my finger on it but could be to do with the group of figures on the right and foreground figure. I wouldn't like to put money on it cos the Kirby traits are obvious. The composition is similar to 3 divided into 3 quite discrete areas and two planes, the rearmost plane being somewhat remote from the foreground, typical Kirby from this period really. 6 is a different Kettle of fish altogether, I've no idea about that one.

i had all of these but number 6.
never seen that cover before,very ditko but also not ditko.
I like the whole idea of the sandman as a concept and was not too disappointed by the ernie chua artwork which is pretty good.

I still have a couple of these around-but they are in a terrible state!

Hi Baab. To me, it's similar to Ditlo's later, looser work, which wasn't quite as good as earlier in his career. However, having looked at a few sites, one mentions that Bill Draut was listed as the cover artist at the time the mag was first advertised, so it seems certain it was him. It's amazing how many sites still list it as being by Kirby 'though.

Hmmm... I've been doing a bit of research. It appears the similarities between Kirby's and Ditko's art on several of the DC titles in the mid 1970s have more to do with the inkers--namely, Mike Royer and Wally Wood. It appears that Royer and Wood were on the same artistic page (possibly aiming for a unifying centre ground?) in those days. This is particularly evident on the titles in the short-lived 'adventure' line (Stalker, which featured Ditko; Justice, Inc, which featured Kirby) and Sandman. Kirby and Ditko's art for DC on such titles appears rather atypical in comparison to their work for Marvel (e.g., Kirby's Black Panther), Charlton (e.g., Ditko's Beyond The Grave) and Atlas (e.g., Ditko's Morlock) during this same period.

Well, certainly the same inkers would give them points of similarity, but even allowing for that, I can't remember ever confusing any of Kirby's or Ditko's DC work. Unfortunately for both of them, their 'glory days' were a thing of the past in '74.

It's only on that handful of mid '70s DC titles where I've ever confused them--or simply had to strain my eyes and say, Is that really Kirby/Ditko? It must have been the inkers.

Actually, Kid, that's a pretty good idea for an essay: the trademark shapes, textures and recurring archetypes that define Kirby and Ditko. For example, ever notice how Ditko has been drawing the same angry young blonde since the 1950s? 'Gwen Stacy' was around years before and after ol' Stevey worked on Amazing Spider-Man. She murdered several husbands for Charlton in the mid to late '70s alone.

You're right in that regard, RW, but (as I'm sure you know) Kirby and Ditko weren't alone in using 'stock' characters - loads of artists relied on stereotypical-type heroes and villains down through the years. Joe Shuster used the same Superman face on all his main male characters, even before he drew Supes.

Oh, definitely. I think more of the masters of yesteryear used such 'stock' characters than those who have appeared on the scene in the last three or four decades. The fun (and rather scholarly) question for me is: Why such individual recurring faces and figures? For example, is the angry young blonde of Ditko's palette his mother? His sister? A long-lost old flame? It's sort of like pondering the identity of the dark lady of Shakespeare's sonnets or what-have-you.

Of course, nowadays, it's harder and harder to nail down any definitive characteristics of an artist in this era of glossy paper and 'computer inking'. Software is the true artist behind the vast majority of mainstream comics these days, sadly.

I suspect it was simply a case of following the path of least resistance. The story needs a blonde? Then stock blonde character 'A' will do. Artists like Kirby and Ditko had such prominent styles that all their characters tended to look 'same-ish' anyway.

And yup - computer software seems to have taken over comics these days.