Looking at the above cover, I'm reminded I was still occasionally buying TV21 at the time, but - MIKE NOBLE's artwork apart - the comic was really a pale imitation of what it had been in its heyday.

It's actually rather sad to see just how much it had deteriorated in quality and originality.  Nothing really distinguished it from other boys' periodicals which were available at the time, and, in some ways, it was a poor imitation of its competitors.  It was really only the inclusion of  TV's STAR TREK which made it worth buying.

If I remember correctly, when it merged with VALIANT, only Star Trek and The TUFFS Of TERROR ISLAND made it into the combined title, demonstrating that it had little to offer apart from faded memories of happier times and far better days. And, of course, the acquisition of a (steadily declining) readership to give Valiant a temporary boost.

However, let's not depress ourselves by focussing on the negative.  Instead, rather, let's enjoy the positive aspects of the comic - such as the fantastic art you see before you.

Did you buy the new series of TV21 back in the late '60s/ early '70s?  Think I'm being a little harsh in my assessment, or do you, too, think that the comic was well past its sell-by date?  Feel free to share your views in the comments section. 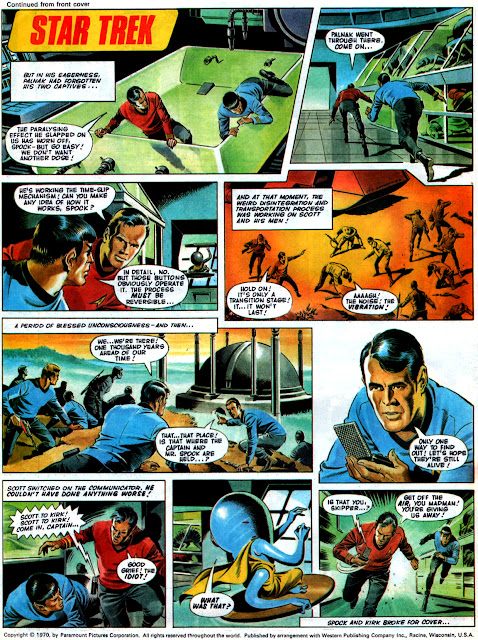 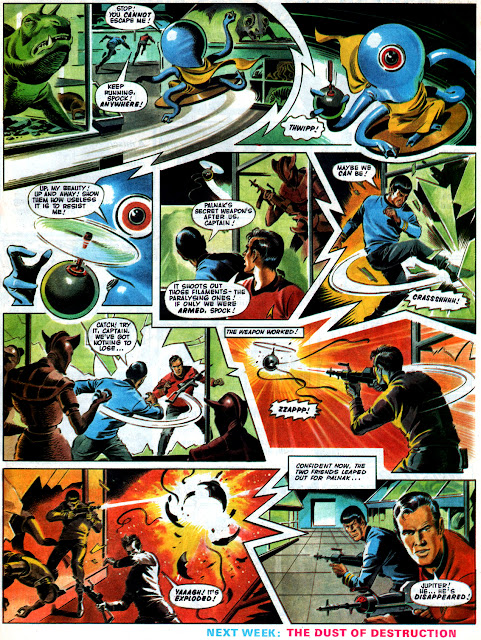 I missed buying TV21 completely, but by chance shared a house in the mid 80s with a woman who had started buying them from #140 to the bitter end.

(I knew we were going to get on well when she caught me sitting in front of the TV at 7.30 Sunday morning with a finger on the VCR "record" button. I confessed I was about to tape an episode of Thunderbirds, at which point I was told to shove over, and afterwards she dug out her treasure trove of Anderson goodies).

She let me have the lot when she moved interstate...well, I was charged with "looking after" them :-) As a big Frank Bellamy fan, it was manna from heaven.

The two obvious questions I have to ask:

1) Have you still got them?

2) Were you more than just 'friends'?


Sadly she died several years ago, and as per the tontine we'd made, I inherited her annuals, games, novelizations, and super 8 films (I suspect her ratbag brother took off with the set of 7 inch adventure records).

And on another note of a similar topic, about 20 years ago a friend's dad was digging around the bottom of an old wardrobe in the ancestral bungalow, and fold a cardboard box. Opened the box and lo and behold....a pristine Dinky Fab 1 sitting unopened in its box. Unfortunately, he's no longer on this Earth either, an i don't know its whereabouts.

Wish I could've met a burd who was into comics and stuff. I do have a Dinky FAB 1 'though.

(Can you imagine my chat-up line? "Would you like to come back to my place and see my Dinky?" I don't think it would've gone down too well.)

B's comment reminded me how my Mother got rid of all my TV21s (the first series) when we moved countries - dad in the RAF. At Secondary School a guy (wish I could thank him now!) was curious why I wanted TV21s and he offered his collection apologising that the first few were nibbled by hungry mice and guess which issue was on top of the pile? Yes, #1, but did I complain when receiving about 200 copies for nothing? Oh no! Great writing Kid, thanks

Have you still got them, Norman? And did you ever track down any further issues? Superb comic for about 2 or 3 years, wasn't it? Ah, happy days indeed.