Ah, memories!  Here's the last ever Christmas WHAM! (#185) from 1967.  Little did I know when I purchased this from my local newsagent 44 years ago that there would be only two more issues of this classic title before it was merged with its companion paper POW!  LEO BAXENDALE's creation, The TIDDLERS (not sure if he drew this one though), adorned the Festively-themed cover, although they had evolved into more of an imitation of The BASH STREET KIDS (also by Leo) over the years since their first appearance in '64.  Bax, of course, was also responsible for The SWOTS And The BLOTS over in SMASH!, so he was no stranger to strips about riotous schoolkids and their teacher. 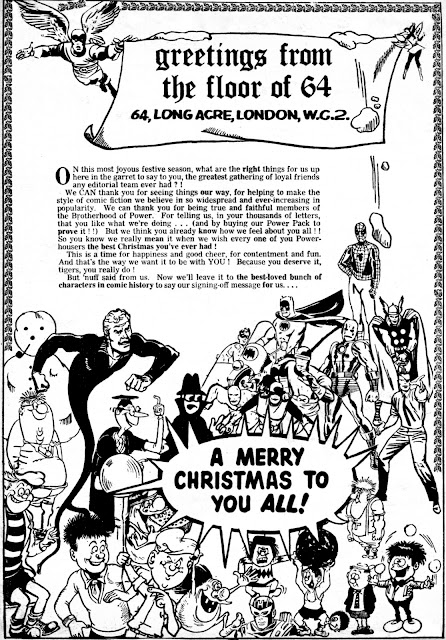 The above GREETINGS From The FLOOR Of 64 page was in all five POWER COMICS that year, which is why it features characters from all of them.  Wham!'s forthcoming merger had doubtless been determined weeks (if not months) in advance, but the text on the page gives no indication of its imminent demise.  And small wonder - why spoil Christmas for Whamsters by spilling the beans at this stage?  Best to leave it to the New Year, when there was a sense of optimism in the air with which to counter bad news.  I must confess to never being too impressed by the combined POW! & WHAM! (not quite sure why), and was actually glad to see it incorporated (as junior partner) with SMASH! around eight months later.

So... raise a glass of lemonade or soda pop to that classic Christmas comic of yesteryear - WHAM!
Posted by Kid at Thursday, December 15, 2011