When SMASH! was revamped and relaunched by IPC in March of 1969, it bore very little resemblance to its previous ODHAMS incarnation.  A few strips survived, but, without the various MARVEL reprints, the comic had lost a great deal of its uniqueness.  (Well, as unique as a companion paper to WHAM! could be.)  Which is not to suggest by any means that the newer version of the comic was bereft of charm, but it was a different type of charm to what had gone before.  Above is the cover to the first Christmas issue of the new Smash!, which, contrary to what I've just written, manages to conjure up similarities to the earlier look of the title - only the different logo betrays the cheat. 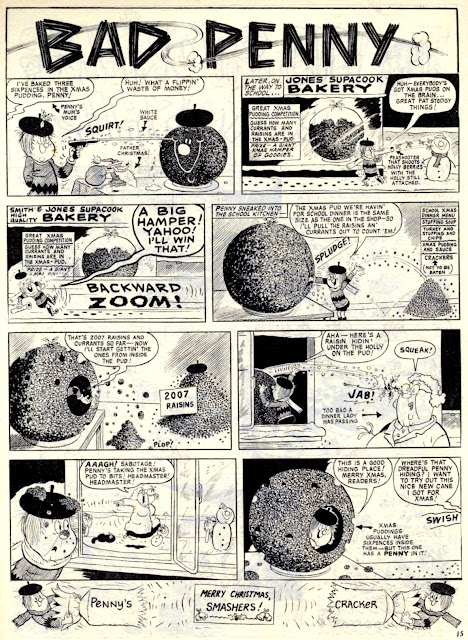 Above (from the Christmas ish) is BAD PENNY by LEO BAXENDALE, which I always preferred to his similarly-themed strip, MINNIE The MINX in The BEANO.  Minnie came first, but Bax's art had evolved into a seemingly simpler, but much more madcap and funnier style by the time he got 'round to drawing Penny. Give me Penny over Minnie any day of the week.  Bax created some good strips for Wham! & Smash! - but it's interesting to note that he never initiated legal proceedings against IPC over copyright like he did with Thomson's.  It's true that the Odhams/IPC/Fleetway characters never had the longevity or success of his DCT ones, but surely the principle of the matter supersedes any material considerations?
Posted by Kid at Tuesday, December 13, 2011

Oh NOW I remember it- now I've re-read your post about Bad Penny and Minnie the Minx. I just needed a little nudge.

I thought that this was a good little post - I was surprised when nobody commented on it at the time, but you've made up for it with your response.

At this time internet was all new to me - I could read and enjoy your posts, but I still hadn't got the hang of how to post comments .Even though it's simple! I was a late starter , you will have noticed!
I chuckle to myself, because I bet my time - travelling comments must confuse the HELL out of new readers going through your archives for the first time!
Well, back iny TARDIS now to return to the present. See you there!