Here's the cover to one of two Christmas issues of WHAM! for 1966 (for the other one, see the post: A HINT Of A GLINT THROUGH The WINDOW), giving Whamsters double the Festive fun for that particular year.  Not so unusual as you might at first think - it just depends on where the 25th falls in the week as to whether a Christmas-themed issue can be fitted either side of it.  I've seen the same thing happen with The BEANO and other titles over the years.

Once again, I'm not 100% certain who the artist is on The TIDDLERS strip - BAXENDALE, BROWN, LACEY or McMURTY?  It doesn't seem loose enough to be Bax, although there's a hint of him in there.  But what else would you expect if he was being ghosted by another?  I'll stick my neck out and say Lacey, but don't whip me with a wet shoelace if I'm wrong. 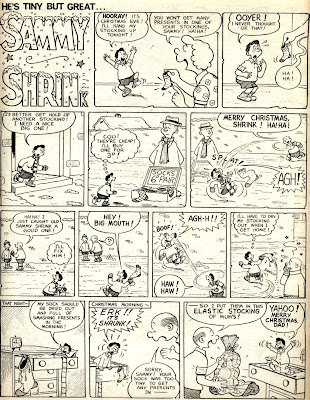 DAVE JENNER was the original artist on SAMMY SHRINK, although TERRY BAVE ghosted his style pretty effectively when he first took over the strip, gradually introducing his own style as time passed.  Without digging through all my back issues of Wham! to sort out the facts and figures as to when Bave took the reins, I'm pretty sure the above strip (from the previous issue - #132) is by Jenner, who would go on to draw strips for THOMSON's The BEANO  - TOM, DICK & SALLY perhaps being his best known.
More Christmas covers to come!
Posted by Kid at Saturday, December 17, 2011