The MIGHTY WORLD Of MARVEL... what a super comic!  At least, it was for about the first thirty or so issues before it died on its @rse!  When MWOM first hit the shelves on Saturday, September 30th, 1972 (dated October 7th), it had six full-colour pages to complement the green-hued spot-colour throughout the rest of the issue.  With issue #5, the colour pages were increased to eight, although they were cut back to four with issue #20.

By the time #65 (above) came 'round, only the front and back covers had colour, the interiors being saddled with a dull grey pall from the over-application of Letratone throughout.  Only the banner (no, it wasn't Bruce) at the top of the cover gave a clue to the fact it was Christmas, plus the back page Seasonal greeting from Stan and the Bullpen.  You'd think they could have stuck a bit of snow on the front cover logo at least, eh?

Sadly, the world of British Marvel was never again quite so mighty as it had been in its earliest issues before bad printing became the order of the day.  But let's raise a glass to it anyway.  After all - it's (nearly) Christmas! 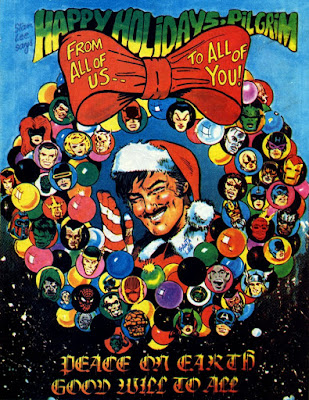 Thanks for showing the MWOM (probably my favourite comic as a kid / young teenager) I vividly remember the issue you have shown (65) as it arrived late (not sure if it was late due to publication issues or my newsagent forgot about it)but at that time MWOM etc were big things in my life I was traumatised lol - at the time I thought the cover was awful, however now it looks pretty cool. I thought MWOM was excellent for about 18 months then it and most of the others went down the pan - McScotty

Glad to be able to re-unite you with a taste of the past.

Mighty World of Marvel didn't lose its magic for me until the Dez Skinn relaunch in the late 1970s.

I must admit the Howlin' Commandos and Planet of the Apes reprints did severely test even my enthusiasm though.

That was when it changed its name to simply Marvel Comic. I remember it well - still got my original issue. I think by then, Steve, it had simply ran through the best of the back-catalogue, and the content was uninspiring to say the least. But those early days of MWOM - simply the best.