Continuing our Christmas comic covers selection, here's a few from one of the last long-running great humour publications released by IPC - WHIZZER & CHIPS.  Ol' W&C lasted about 21 years before the plug was pulled and it was merged with BUSTER.  One of my greatest thrills was when BOB PAYNTER (who was then group editor of the IPC Humour Dept and the first editor of W&C) asked me - at the end of a busy day - to letter the SID'S SNAKE and SHINER strips of both sections of the comic when I was down in London on one of my regular visits back in the mid-'80s.  After an eight or nine hour journey without sleep and then working for eight hours, I was probably too fatigued to do my absolute best, but they turned out okay.  Anyway, soak up the atmosphere of these fab festive favourites from years gone by. 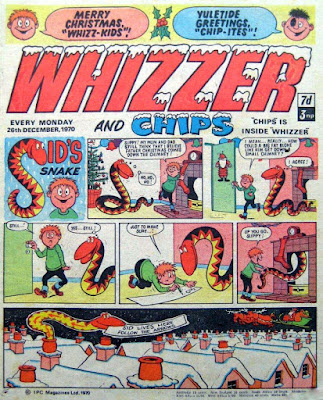 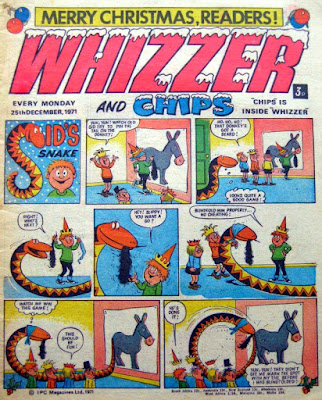 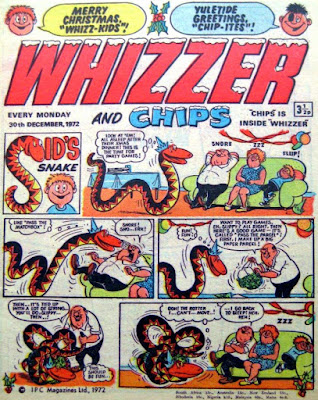 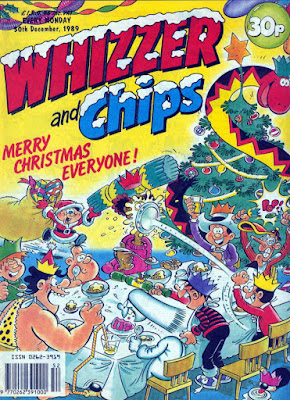 I lettered quite a few strips for Whizzer & Chips - in fact, my first published work (CAP'N KID & The PIRATES) for IPC appeared in the comic.  It wasn't the first strip I lettered for them (that was a THARG'S FUTURE SHOCKS story for 2000 A.D.), but because of scheduling, the W&C one (which was the second one I did) appeared first.  I recall once lettering a SAMMY SHRINK strip (drawn by TERRY BAVE) and being amazed at working on a character I had read as a child.  And I'm sure I did a fair bit of lettering for Annuals and Summer Specials, plus I was a regular re-size artist on the W&C comic libraries.  In fact, I remember seeing the very first issue of the regular title advertised in SMASH! back in 1969, and getting up about 7a.m. the following week to run over and buy it at the newsagents across the road.

Ah, if only it were still with us - as well as a long list of other comics.
Posted by Kid at Thursday, December 15, 2011

There was an unwritten law at IPC that stated that all 'dads' shown in the comic should be bald on top (three strands of hair combed over optional) with a moustache. They should also say things like "It's all daft to me".