The first MARVEL UK Annuals were published by IPC/FLEETWAY on Marvel's behalf, before WORLD DISTRIBUTORS took on the task for most of the rest of the '70s.  Then GRANDREAMS stepped in up until the early '80s, which brings us neatly to the two Annuals you see in this post - STARBURST - for, I believe, 1982 and '83, and issued in the last few months of the preceding year in each case.

The one above is a replacement for my original copy, some of which yet survives because I cut out a few of the film posters and a couple of articles before dispensing with the rest of it when it became damaged in some way back in 1982 or '83.  The one below is not one I had at the time, and I'm unsure as to whether I'd even seen it before spotting and buying it (along with its companion) on ebay recently.  As far as I know (and I could be wrong) they were the only two Starburst Annuals produced - if you know of any more, feel free to enlighten me.

JOHN BOLTON is the artist of the second cover, which is very striking.  Other movie magazines doubtless had Special yearly issues (I've sure I've got a STARLOG yearbook somewhere, purchased in Southsea in 1981), but I don't think they were ever called Annuals, nor did they ever have hardback covers, being but 'double-sized' glossy-covered magazines.

Anyway, just thought I'd show you them as a sort of tie-in to the Starburst magazine cover gallery I posted around five years ago.  Go on, feel free to remind yourselves by clicking here, here, and here. 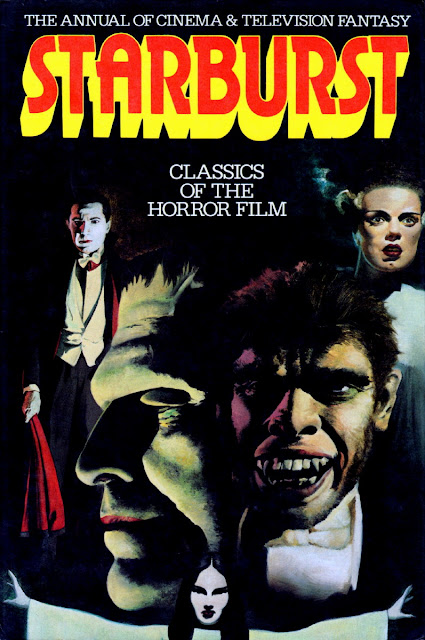 Starburst was quite an interesting monthly magazine. .I never bothered with the annuals.Then they released TV Zone which I bought monthly until it started to get repetitive.TV Z I recall did specials which was their sort of annual. They were repeats of items from the last six months . Starburst and TVZ were well worth a read for a couple of quid each month

I think I might have a couple of issues of TV Zone, LH, but I didn't buy it regularly. I must've given up on Starburst after the first two years, though I still bought occasional issues (which I still have) whenever it contained something of interest to me. Hard to believe the first issue of Starburst came out over 40 years ago, eh?