CONAN THE BARBARIAN - THE ORIGINAL MARVEL YEARS - VOLUME ONE...


My CONAN The BARBARIAN Omnibus volume arrived from America yesterday and I just love poring over it, drinking in the vibrant colours and ornate BARRY SMITH artwork.  If you're going to buy this book, get the one with the variant Smith cover, as the other one by JOHN CASSADAY and LAURA MARTIN is truly awful - sorry, but it is!   Really, it has to be the worst cover I've ever seen on an Omnibus edition.  Conan has no neck, looks as if he has no hair on one side of his head, his arms are stiff, and his legs are twisted in unnatural positions.  The colours are nice but can't save the drawing, and I'm surprised that it was ever chosen as the main cover of the book.

This volume has over 700 pages, and while it's great to see the tales coloured after their initial printings, the book is let down in other respects.  Firstly, there are too many typos in the text pieces, with words like 'clearly' being rendered as 'clearing', 'was' as 'will', and 'Silver Surfer' as 'Sliver Surfer' - and that's only the ones I noticed during a cursory glance.  Also, there's too much repetition, with just about everything ever written by ROY THOMAS from previous reprint publications, even though he retells most of it in his new introduction.  It would be better if his new intro encompassed everything (if it doesn't already) related in the old ones, and the pages instead featured the KULL The CONQUEROR back-up story from CTB #10, which I was disappointed to see wasn't included.  (Or RED NAILS from SAVAGE TALES #2 & 3.) 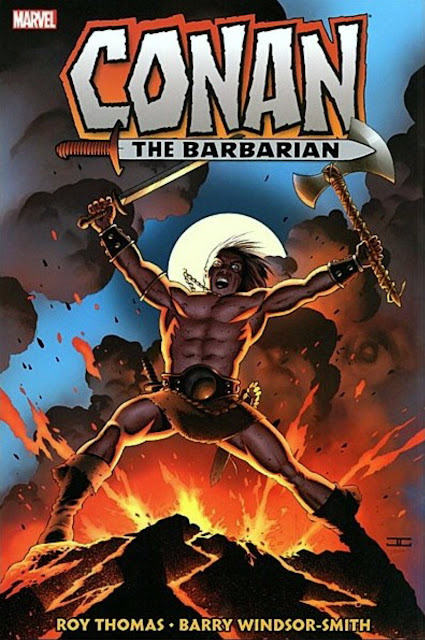 Another thing that irks me is that issue #9's story has no corner page numbers, being seemingly sourced from a later reprint in which they were removed, and #12 has no corner page numbers on the last two pages, though the second-last one shows faint traces of where it had been.  (Perhaps someone with the original issues can check just to make sure I'm right in what I say.  It's always possible that the last page never had one.)  A book this expensive really should be the definitive version, but sadly isn't quite that.  However, it's a very handsome volume, and even though I've got all of the tales in the softcover DARK HORSE reprint series from a few years back, it's nice to have them in (mostly) their original shape and form.

Once MARVEL has sorted out the typos, I may buy a new printing in the future, but in the meantime this one will do for now.  It's just great to see Smith's cover on the front of a book of this size -and if you're a Conan fan, you'll be able to overlook its few imperfections and gladly add it to your library of Marvel Omnibuses.  Speaking of which, far too many of them have faults like the ones detailed above, and it's time that Marvel fired their proofreaders and got folk that can do the job properly.  You know the old saying - "If it's worth doing, it's worth doing well!" 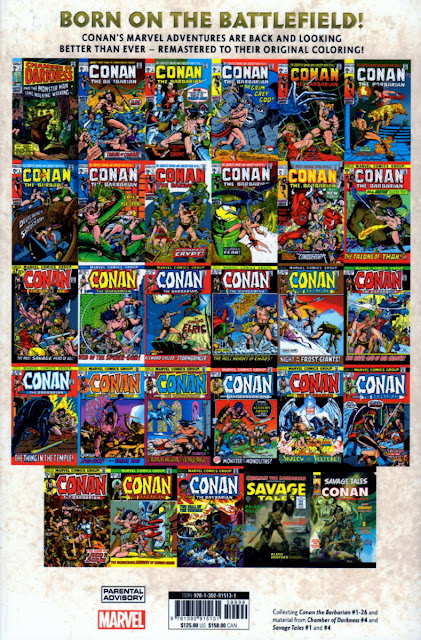