WOULD YOU LOOK AT THE SIZE OF THAT MOUSE... 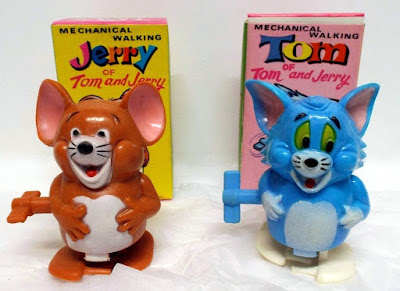 'Twas many, many years ago now - way back at the end of 1972 or very early in '73 if I recall correctly.  It was late afternoon and beginning to get dark, and the street lights had already sprung to life in order to pierce the gloom of the advancing blackness.  Did a recently fallen thin covering of rain adorn the pavements and roads, reflecting the gleam of the lamps in their twinkling surface?  I no longer remember with certainty, but there could well have been.

I was in a shopping precinct called Calderwood Square when a sudden idea struck me.  First, a bit of background detail:  On Friday, 6th October '72, my father had taken me with him on a jaunt into Hamilton.  I'd been off school for a day or two with some trifling illness, but had started to feel better by early afternoon.  (Funny how being off school aids recovery, eh?)  Because I'd perked up, my father felt it would be good for me to get out of the house for an hour or two, so took me with him on some errand to the aforesaid place.

Whilst there, I remember us going into a charity shop, and then passing a shop that reminded me of The TERRIBLE TINKERER's repair shop in The AMAZING SPIDER-MAN #2.  In the window was a DALEK money bank which I could've afforded, but passed on because of its weird shape.  (How I now wish I'd bought it when I had the chance.)  Then we went into a newsagent's, where I bought a second copy of The MIGHTY WORLD Of MARVEL #1, plus The FANTASTIC FOUR #126.  On the way home on the bus, I was struck by how fast the journey was, as if Hamilton was only a few minutes away from my own town.

Given my propensity to include trivial, unimportant detail when relating events, it should come as no surprise to you when I say that most of the above has no bearing on my tale - apart from the last part about my impression of the neighbouring town being not too far away.  So let's return to Calderwood Square and the idea I alluded to earlier.  The main road to Hamilton was a short distance from the square, so I decided to walk there, as I'd have a better selection of goodies on which to spend my pocket money.  So off I set, but it wasn't long before I realised that I'd optimistically misjudged the distance.

I therefore abandoned my plan, left the main road, took a shortcut past a nearby farm, and made my way back to Calderwood Square, where I purchased an ALAN CLASS comic reprinting FF #6, (CREEPY WORLDS #130) and a wind-up walking mouse - Jerry from TOM & JERRY fame, to be exact.  I may also have bought FOREVER PEOPLE #4 or/and 5, though that could have been another occasion (or occasions) which I'm merging into this one.  If so, it's understandable - same shop, same place, and my memory's not as sharp as it once was.

Which brings me up to date you'll be glad to hear.  (I just felt like indulging in a bit of preamble in order to live again that far-off time, which seems like no time at all and a million years ago at almost one and the the same moment.)

Today a replacement for Jerry mouse arrived at the same house I was living in 47 years ago when I acquired his doppelganger, but this time he crossed the doorstep with a friend - namely Tom, the cat, from the series of MGM classic cartoons that both characters appeared in, which were frequently shown on TV back in the '70s. Both of my toys are manufactured by MARX, though their name appears only on the boxes, not the toys themselves, which is unusual.  In fact, the following close-up ebay photos of the same toys do have the Marx brand on their backs, so it must either have been added or removed from the moulds at some stage.  I no longer recall whether my original Jerry had the brand or not. 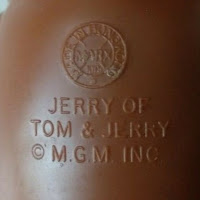 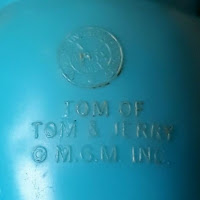 Another little bit of 'yesterday' to keep me company today, on my journey into tomorrow and however many (or few) tomorrows yet to come.  Surely you wouldn't grudge me it?  Incidentally, I did subsequently make that journey into Hamilton on foot a few months later (with a friend), but that's perhaps a tale for another time. (Update: That time has now arrived - click here.)

P.S.  I've borrowed the opening photo from the Internet, as I haven't had time to take one of my own yet.  When I do, I'll replace it.
Posted by Kid at Thursday, February 07, 2019

Kid, has your Conan book arrived yet? I'd be interested to read your review of it.

Yes, it arrived yesterday, CJ. I'll be doing a brief review of it later once I've had a nap. Totally knackered at the moment.