HOW ARE THE MIGHTY FALLEN... 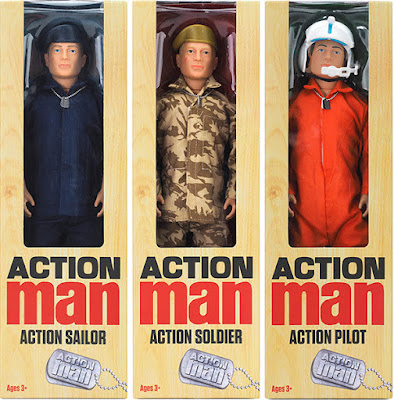 The thing that once distinguished ACTION MAN from a doll was that he was a 'fully-articulated' figure, whereas a doll was a barely poseable clotheshorse for a variety of outfits and accessories.  True, Action Man also had his own vast wardrobe, but you didn't just dress him up and look at him, you could bend him into almost any realistic fighting position - unlike girls' dolls who weren't much more flexible than shop window mannequins.

Not any more alas!  The new Action Man is a shadow of his former self, with only eight points of limited articulation, which means his main reason for existence is to showcase his different outfits.  You have a choice of three - sailor, soldier, or pilot, but the figure is really just for display, with severely limited play possibilities compared to his original '60s incarnation.  I can't really see kids of today warming to him, and collectors will be disappointed by his reduced abilities.

Once an action figure that truly lived up to his name, he's now been reduced to that of a mere doll.  How are the mighty fallen indeed.

Or at least that's what I thought until I discovered that this is intended as a range for young kids to introduce them to the Action Man brand (still think he could be more poseable though).  A super-articulated version is in the works for sometime this year for older kids and collectors.  Thank goodness for that.  Take a wee look at their site:  www.actionman.com
Posted by Kid at Monday, February 25, 2019

Did you know Action Man's real name is Matthew Exler?

Tell you an interesting story (I hope) about that, DS. A number of years ago, The Sunday Post published an article about the real person Action Man was, in 1966, supposed to be (facially) based on - only thing was he was British, and as I'm sure you know, Action Man was originally just a repackaged and renamed G.I. Joe who first came out in 1964.

The fellow was probably thinking of Pedigree's Tommy Gunn, which also came out in '66, around the same time as Action Man, but I can't remember his name. Incidentally, there's a pic of the prototype of G.I. Joe on the blog somewhere.

As for Matthew Exler, that was a much later development in the 1995 TV series, and the 2000 TV series renamed him Alex Mann, so I don't consider either of them as his 'real' name. I regard his first name as being Joe (Joe Acton if you like) because of his G.I. Joe origins. Of course, the 1990s-2000s Action Man had a completely different face, and can therefore be regarded as a totally different person.

I didn't know any of that, thanks for the info! I always thought the old 70s Action Man looked a bit like Lewis Collins facially. Having said that, my (hand-me-down) Action Man had been knocked about so much that he bore more resemblance to Phil Collins than Lewis.

Just to reiterate as I may've been a bit vague there, Action Man's face wasn't based on the British guy claiming it was in The Sunday Post (they're not very good at fact checking I've found). He was maybe thinking of Tommy Gunn (or some cheaper figure) and just misremembered. Wish they'd bring Tommy back.

I still haven't recovered from the knowledge that Captain Scarlet's real name is Paul Metcalfe...

Being old enough to have seen Captain Scarlet the first time around, I knew that from an early age, OD. (Pssst! He's only a puppet.)

One of Action Man's costumes was a German officer. That was surprisingly enlightened and forgiving for the '70s.

I reckon it was only done in order to provide AM with a baddie to fight against, CJ. Toy Cowboys had toy Indians to stage battles against, so toy soldiers need their opposing forces as well.

It looks like today's Action Man cut himself shaving off his old Action Man beard.

Not with those hands, T47 - I doubt he could hold a razor.

That's why he cut himself!

Having mentioned the detailed artwork of Ken Reid on Jonah and agreeing with you that the contemporary work at Mad Magazine was for an older audience I looked to see if any had been reprinted recently.

Low and behold in 2015 E.C. Publications reprinted in comic book size on good paper, in colour the original works of WILL ELDER, WALLY WOOD & JACK DAVIS.

My copy of Will Elder just arrived. I'm looking forward to reading PING PONG having last week seen the Broadway show, KING KONG. It's a dreadful musical but has great staging and an amazing puppet as the lead! After Lion King and Warhorse it's the most amazing puppetry if that's your thing.

Ah, but he had that same scar before he grew the beard.

Wasn't sure if you wanted me to publish your other comment, T47, but wasn't sure that you didn't either, so just went with it. I'm not sure whether I've got any books on individual Mad artists, but I think I've got a Don Martin Special of the mag. I've also got a boxed set of hardbacks containing the first 23 issues of Mad from when it was a comic, and the artists you mention (and the Ping Pong strip) are included. Back around 1997, DC Comics (who own Mad) reprinted them again in an 8 issue series of full-colour magazines, and it's a very nice run indeed.

Saw a clip of the King Kong puppet on Mark Evanier's blog, and it was very well done.

The reprint of the first 23 issues is the same material, the comic strips before the magazine format. The larger reprints are certainly better than the reduced size in the b/w paperbacks that were the first time I saw the art.

I didn't know if the 'unrelated to the post' was something you wanted here, it was your choice.

Seeing Kong on a Broadway stage was like reliving that scene from the 30's movie. A tip if you get to see it in person, don't sit in the center of the first row!

And they're in colour - unlike the paperbacks, of which I also have a few.

I'm not too bothered about people remaining 'on-topic' - if a post or comment inspires a thought in someone, then it's okay for them to share it. Okay, so that's not what happened here, but the way I see it, Mad was a comic (now a mag) and Action Man used to have his own comic, so there's a bit of a connection.

There's not much chance of me ever seeing the Broadway show unless it tours in my neck of the woods - and I doubt that my local theatre could accommodate it.

From what I remember of my own Action Man days, the German Paratrooper & the US Marine were the most desirable, I think because apart from being the best uniforms they had more accessories, grenades etc.

Tommy Gunn's equipment was probably better - the boots fitted better and had actual laces, and you could pull the pins out of the grenades. They exploded when you did so. (Okay, so that last part's a lie.)

Thanks for the heads up Kid. I didn't know about this new range. Its very interesting. I missed the 40th Anniversary range so maybe I will treat myself to something this time round! The Life Guard would be cool if it gets re-issued.

I really don't need any more Action Man figures, Woodsy, but I'll probably buy at least one of the new range for collectors when they're issued. Sad as it may sound, it makes it seem like 1966 isn't that far away. I bought the pilot figure in the photo, but it really is just a doll. However, it was good to see that familiar face from childhood once again.

A good post, Kid. You've raised some valid points. I've seen this range of figures in a shop window. I'm glad I knew the older Action Man when I did, as a young nipper, when he and I were both at our best :)

He should be back to his best in the new, super-articulated range, TK. It's just a shame that I won't be due to the ravages of time.