MIGHTY MOTH is probably one of the earliest comic strip characters I remember from childhood, maybe even the earliest.  I first saw him in the 1962 or '63 TV COMIC Holiday Special while either holidaying (aptly enough) in Ayr (I think), or perhaps only on a day trip.  The title of the comic didn't register with me, nor did the name of the character (though I was aware he was a moth) - it was artist DICK MILLINGTON's distinctive style which I remembered.  A year or two later, while thumbing through a weekly issue of TV Comic in a newsagent's, that style jumped out at me and, although I didn't become a regular reader of the periodical until the late '70s, I did buy the occasional issue over the years up until then.

It was because ol' Mighty reconnected me to an earlier time in my life that I bought the Winter Special bearing his name towards the end of 1980.  That's it above, the very same one which I've now owned for just over 38 years - wow!  I only found out a few short years ago that there was also a 1981 Holiday Special and have been trying to obtain one ever since.  (I featured an image of it in a couple of posts some years back, but it was 'borrowed' from ebay.)  I'm now glad to be able to say that my very own copy arrived yesterday, thereby completing my two-issue set.  At least, I'm only aware of two, so if anyone has any info about other issues, I'd appreciate you letting me know. I've just read (or re-read in the case of the first one) both comics over the last couple of days, and my already huge regard for Dick Millington's talent and appreciation of Mighty Moth has increased to even greater proportions in the process.  I derived a goodly portion of laugh-out-loud moments from the strips, and Dick's deceptively simple style possesses a really funny visual quality that is quite impressive.  To get a laugh from just looking at a picture suggests that it must be good, and there are quite a few of them in these two publications.  It's possible that I never knew Dick's name until I saw it on his HAPPY FAMILIES newspaper strip, which, if so, means I was an adult (allegedly) before I could put a name to the artist.

Mighty Moth's basic premise was the same as (though preceded) the FRANKIE STEIN strip in WHAM! (and later comics), in that 'dad' was always trying to get rid of the one who inadvertently plagued (but loved) him.  In Mighty's case, he sometimes deliberately tried to annoy dad (usually in revenge for dad's hostility), but this was merely in service to a story, and, in fact, he often seemed to regard dad and his wife as actual parents.  Anyway, in celebration of me finally having both Mighty Moth Specials, below are a handful of strips to hopefully provide you all with a few chuckles.  If only REBELLION would acquire the rights to the character and do some collected editions - The COMPLETE MIGHTY MOTH.  Sounds good to me. 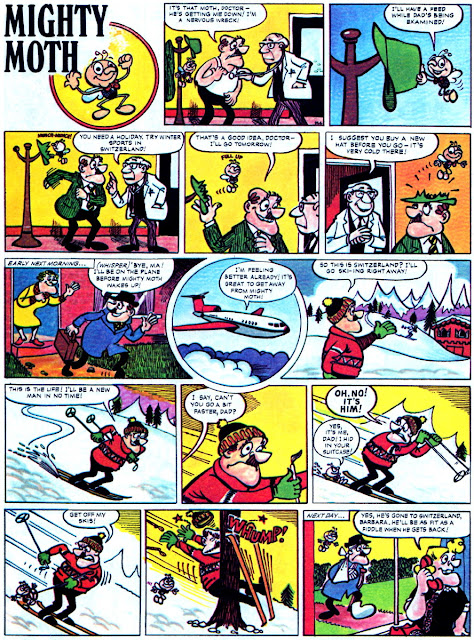 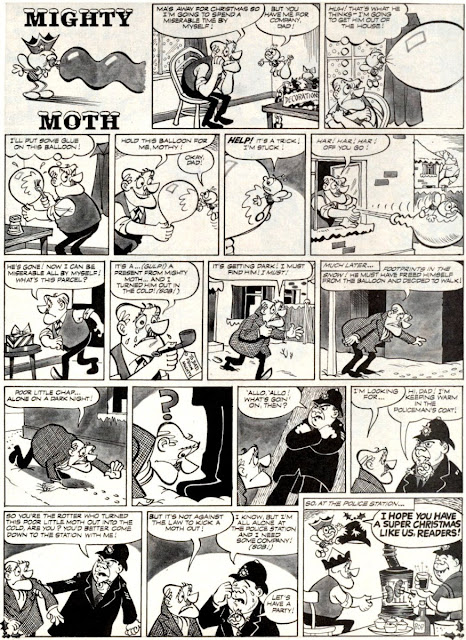 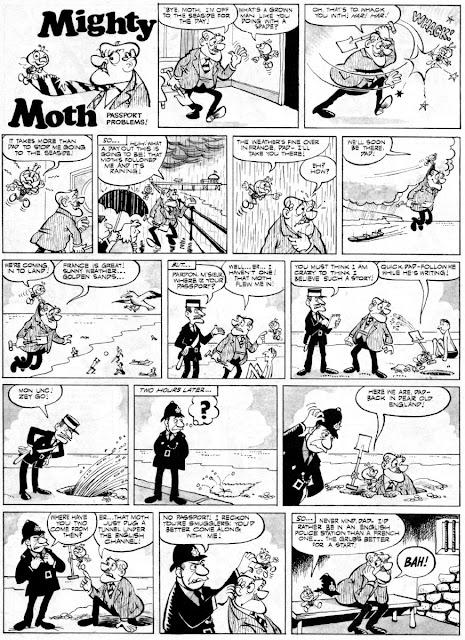 Nice AKA cover surprised it wasn't used as from memory AKA covers were not that good and needed a quality fan cover like this.Have too say Mighty Moth was never a favourite of mine as a kid which is strange as I used to love the Fearless Fly cartoon (do you remember that from Cartoon Cavelcade up here). Kid I've heard Google plus is closing will that impact on your site as I have read a few on blogger are moving to Facebook etc?

As far as I know, PM, the issue the cover was designed for was never published (lack of content maybe?), which is why it was never used. All I see when I look at it is the bits I could've done better. Yes, I remember Fearless Fly from Cartoon Cavalcade - what Scottish kid of the time could ever forget it? (Apart from ones without TVs of course.) This blog doesn't use Google Plus so it shouldn't affect it.

Did the Aka fanzine have a connection with the Aka shop in the Virginia Galleries, Kid?

Sure did, DS, and they were still there when I drew it.

I have a couple of comics which still have their AKA price stickers attached (which say AKA Books and Comics, 33 Virginia Street)- can't remember any reason why I didn't remove them at the time, but I never would now, they're a part of my past just as much as the actual comics are.

Apart from that, DS, if you tried to remove them now, the colour underneath would be 'faded' as it's become part of the underside of the price stickers.

Exactly- the covers are perfect right now with their AKA stickers, in my eyes. I used to love AKA's plastic bags too- I remember they had one which had a pic of Spider-Man, Thor, the Hulk and Captain America all in their late '80s looks; black costumes for Spidey and Cap, Thor in armour, and the grey Hulk- I think it was reused from a Marvel house ad, or maybe a Marvel Age cover. When they started using that bag, a comic collecting friend came round to my house to tell me, very excitedly, that AKA had a new poly bag! How carefree those days were!

I may even have the bag you describe, DS, because sometimes some bags were just too good to throw away. I got a great bargain in their wee place in the Virginia Galleries (before they moved to larger premises opposite) back around '83 or '84. I bought a spare copy of the Marvel UK weekly 'The Savage Sword Of Conan' which had the poster inside, and when I got home and opened the staples, it also had (by some freak of circumstance) the poster from 'The Super-Heroes', which had come out on the same day in 1975.

See, I'd originally bought two copies of each first issue back in the '70s, one to save, and one to take the poster from and put up on my bedroom wall. Unfortunately, I glued them to the wall (not at first, but later), so that when we moved house in mid-1983, I couldn't take them with me. (I tried to remove them, but damaged them in the process.) I still had both copies of each comic, one of each with their poster, but I wasn't going to use them, as I wanted to keep them in pristine condition. Therefore, I determined to find back issues of them, and thought myself lucky when I saw the Conan weekly in AKA. You can imagine how lucky I felt when I discovered it contained both posters. (Which had never been removed until I bought the mag.)

The posters came back with me to my former house when we moved back in 1987, and they've been up on my wall (in the same place their predecessors adorned) ever since. Hey, I should make a post out of that!

Sounds like you stumbled on a great find there. I remember buying Fantasy Masterpieces #6 there at a very bargain price around 1988 or so- still have it!

I do like it when you find a copy of something that has an individual quirk like that mag having the two posters. I have a comic which has two copies of the front and back covers in it- little things like that make you feel you have something unique.

It wasn't unique for long, I'm afraid. Those two posters were up on the wall faster than a fart from The Flash!

I adored Mighty Moth as a kid Kid. TV Comic Annuals always remind me of lying in bed on a Sunday night in the Sixties, laughing at the strips but dreading school on Monday!

I reckon that Mighty Moth was probably the best humour strip in TV Comic, Woodsy. It still makes me laugh today. I'd certainly buy a collected edition.