PART TWO OF OMEGA THE UNKNOWN - WHO KNEW...?

It happened with three MARVEL comic mags I was buying at the time back in the '70s - HOWARD The DUCK, The ETERNALS, and OMEGA The UNKNOWN.  After the first five issues they vanished from sight in newsagents, leaving my collection incomplete for many years.  I later tracked down the rest of The Eternals, and #s 6-12 of Howard in the very late '80s or early '90s, but it's only in the last few days I've acquired the individual issues of Omega #s 6-10.

As many of you will know, after printing the US copies, Marvel changed the plates to include the UK price, and to substitute 'Marvel All-Colour Comics' in place of 'Marvel Comics Group' on the banner at the top of the covers.  This was done (so I read somewhere) to alert potential customers to the fact that the monthlies were in full colour, unlike the British weeklies, which were mainly black and white.  Interestingly, all five issues I received recently are US copies, so I suspect that perhaps the title was non-distributed in Britain after issue 5.  If anyone knows for sure, feel free to enlighten me via the comments section.

In around three months time, it'll be five years since I showed you the covers and splash pages of the first five issues of Omega, so it's well-past time I showed you the ones for the remaining five - and here they are.  If you'd like to remind yourselves of the preceding images, you can do so by clicking here.  Another post which might be of interest to you is this one.

It might take me a while to do things I said I'd do, but I get there in the end - whether it be comics or blog posts.  Enjoy! 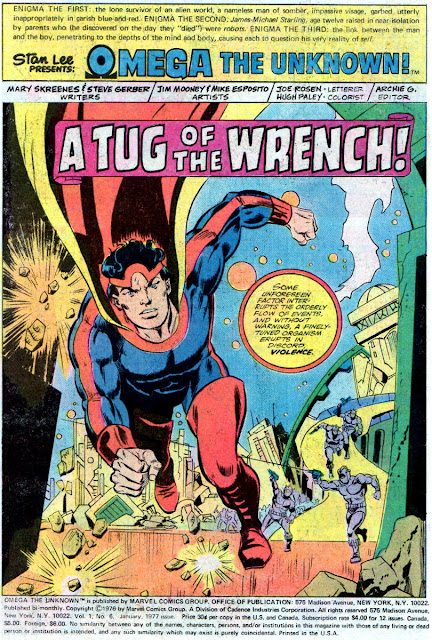 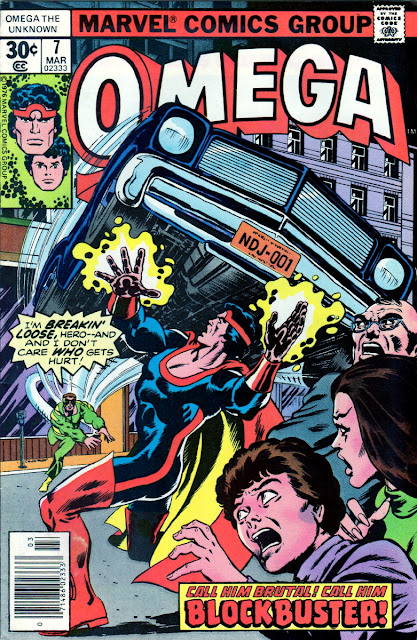 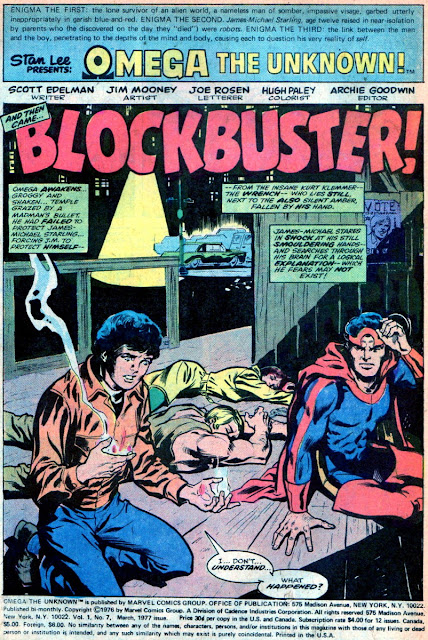 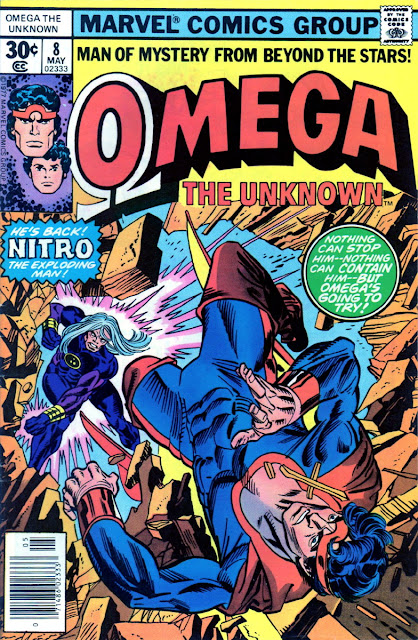 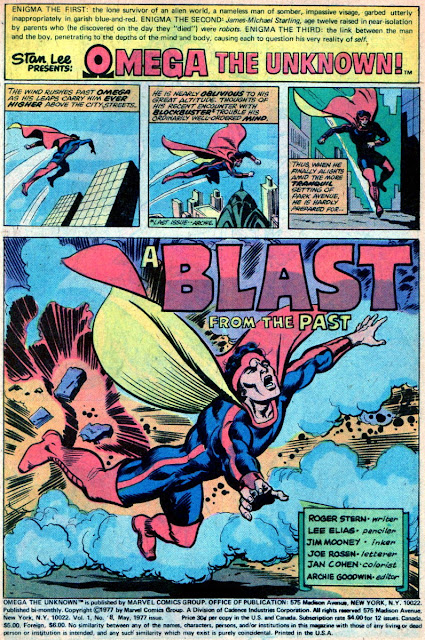 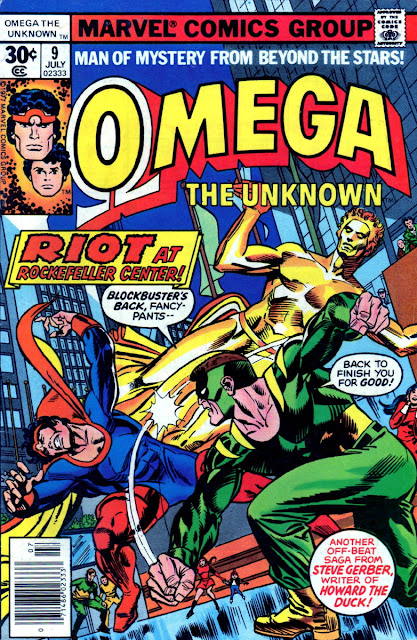 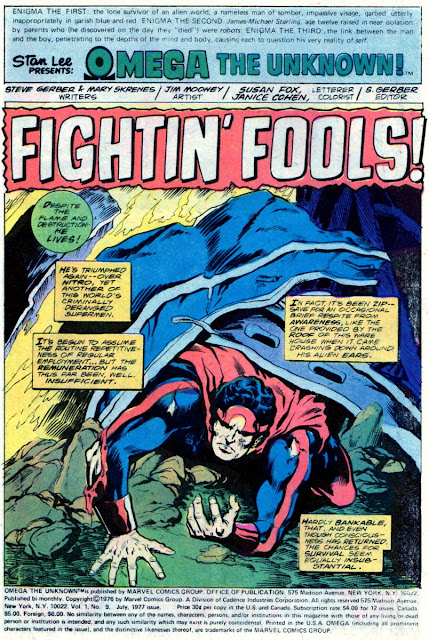 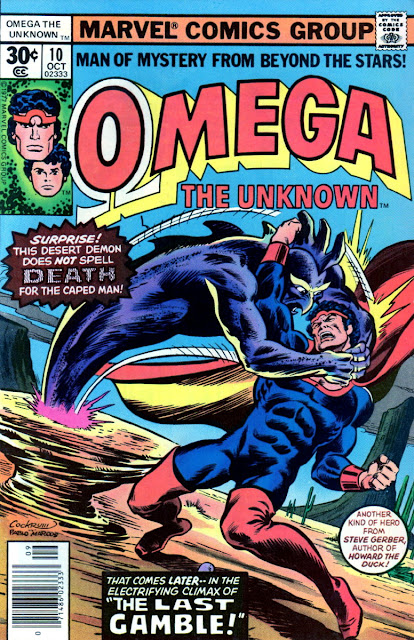 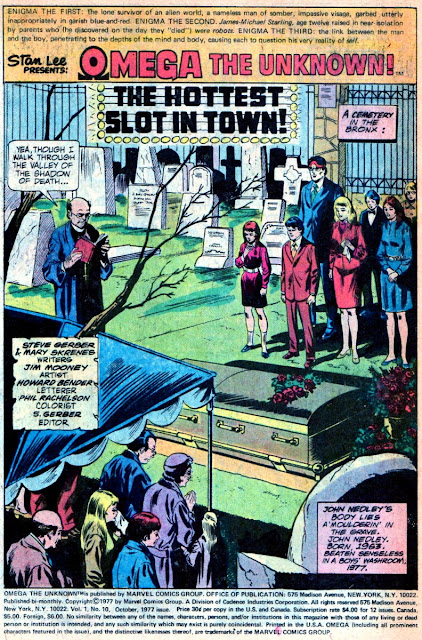 Well he’s still unknown to me since I never got a copy and they killed him off never to appear again! I should get the trade collection out of curiosity. Omega was always the last comic left on the stand which nobody bought even me.

I definitely owned Omega The Unknown No.6 because I recognized the cover instantly, in fact it was the only issue of Omega I owned. But I bought it via mail-order in the early '80s (I bought lots of American Marvel comics by mail-order at that time - I'd browse a monthly catalogue and just choose various ones that took my fancy) so I can't say if the banner at the top said MARVEL ALL-COLOUR COMICS or not. But by about 1979 all the imports had the UK price and MARVEL COMICS GROUP at the top. By early 1980 I was buying American Marvels regularly from WH Smith's and they all said MARVEL COMICS GROUP.

Omega did appear again, PS, in a ten issue limited series in 2007. Just shows that you can't keep an enigmatic hero down. Haven't read it, so don't know if it followed on from the '70s series or not.

I assume that Marvel realised it was pointless changing the banner, CJ, and that was why it was discontinued. Mail order companies, as you know, imported non-distributed comics into this country to sell direct to customers.

Omega was Steve Gerber at the top of his game, at least for the first few issues, and definitely worth reading if you never have.
Never read the reboot, never will. If it ain't gerber, why bother?

'Cos there's a lot of comics not written by Gerber, PD. If we only read his, we'd soon have nothing to read. (But I know what you mean.)

Gerber was a fantastic writer, although I re-read Omega a few years ago and found it a little disappointing, although to be fair I think that was mainly because we never found it how Gerber intended the story to end. I've said this before, but I think one of the best things he wrote was a Foolkiller limited series for Marvel in the early 90's.

I also found Omega a little disappointing, DS, simply because he never had time to develop it and, as you say, never got to wrap it up. Don't have the Foolkiller series, but might track it down one day. Still love his Howard The Duck #3 - Master of Quack Fu - a classic.

That's a great issue, with Buscema art, if I recall correctly (and I'm sure I do as I re-read it just before Xmas!)

Omega (and Nova) were dull and their stories were without direction. By the mid-1970s, the Marvel stories were reminiscent of the titles that DC had been churning out in the 1960s, often even using former DC artists in bland stories. Omega, reminiscent of Superman, first appears in a vision, then in a stolen spaceship. He never speaks, but displays an uncanny resemblance to a young Earth boy, James-Michael Starling. He first appeared when the boy was in the hospital recovering from an accident that also apparently killed his parents who turn out to be robots. Omega can project force blasts from his hands. These rays have left stigmata in the shape of the Greek letter Omega on his palms and also on those of James-Michael’s, as he discovers that he is linked to the hero. Perhaps not a bad start, but little here will make sense. Omega, who doesn’t speak, was created to be a puzzle, but we never get enough pieces to put the puzzle together and the pieces we have don’t always fit

Having re-read it recently, Barry, I couldn't help wondering if even Gerber and Skrenes knew exactly what direction they were headed. The series was more puzzling than it was interesting, and the wrap-up in The Defenders made it all seem so pointless.