Launched on Saturday, February 11th 1967, it's now been
50 years since FANTASTIC #1 appeared in newsagents' shops
all across the country.  Published by ODHAMS PRESS, it was the
next stage in the evolution of comic titles like WHAM!, SMASH! and
POW!, which featured U.K. humour strips among MARVEL reprints.
(Or vice versa.)  Unlike its companion papers though, the contents of
Fantastic weren't resized to fit a British comic's page, instead being
granted the privilege of appearing (more or less) in their original
format - albeit in a slightly larger size in black and white.


Credit boxes were omitted, and U.S. spellings, references,
and speech patterns were routinely altered ("I ain't" to "I'm not"
for example), but just seeing the artwork of JACK KIRBY, DON
HECK, and STEVE DITKO in all its crisp, cataclysmic glory, was
what mattered to young readers back in the day.  Not forgetting,
of course, the power-packed scripting of STAN (The Man)
LEE, LARRY LIEBER, and also ROY THOMAS.


The periodical was edited by ALFRED WALLACE and
ROBERT BARTHOLOMEW, aka ALF & BART.  Along with
ALBERT COSSER (COS), they oversaw the five weekly POWER
COMICS until, like the song's famous ten green bottles sitting on the
wall, there were none left.  Fantastic contained some home-grown
produce in the form of an occasional humour page, as well as The
MISSING LINK/JOHNNY FUTURE strip that appeared for
51 issues, drawn by Spanish artist LUIS BERMEJO.

It lasted only 89 issues, a Summer Special and 3 Annuals,
but Fantastic remains one of the more fondly-recalled comics
of the '60s by those who were fortunate (and discerning) enough
to have bought and relished it at the time.  Tell you what - let's
now take a look at why it was just so... Fantastic!

(I obtained my first replacement of this ish towards the end
of 1980, just over 13 years after it was first published.  Amazing
to think that more than 36 years have passed since then.) 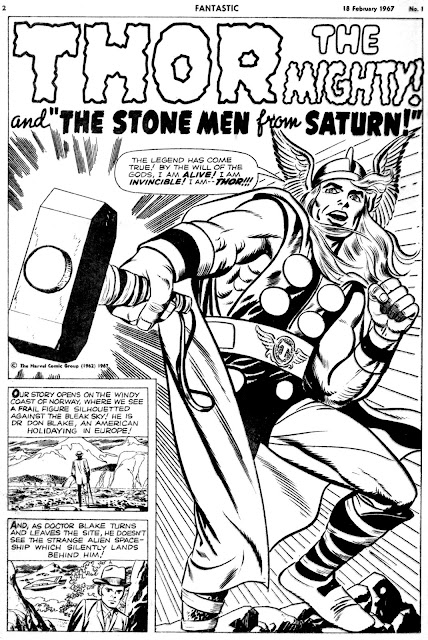 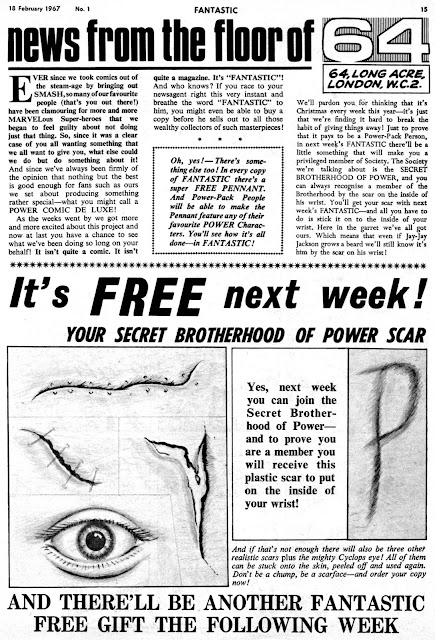 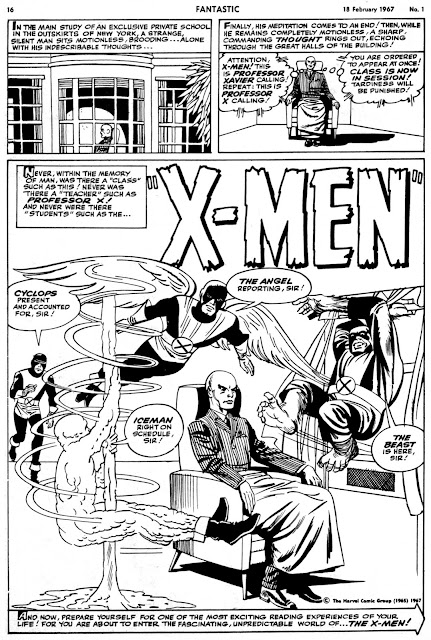 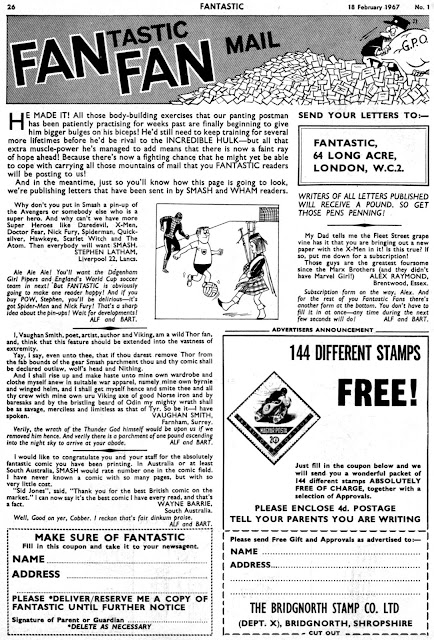 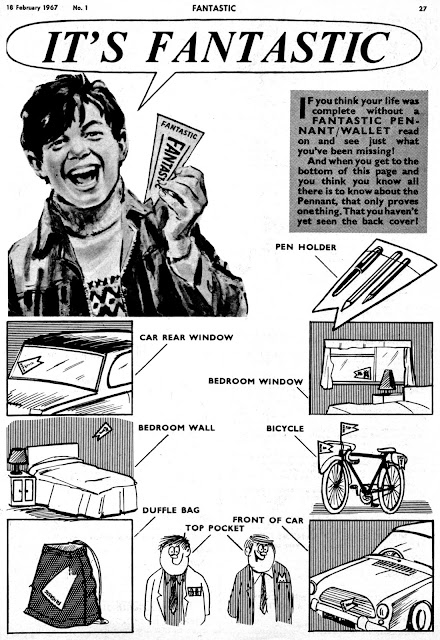 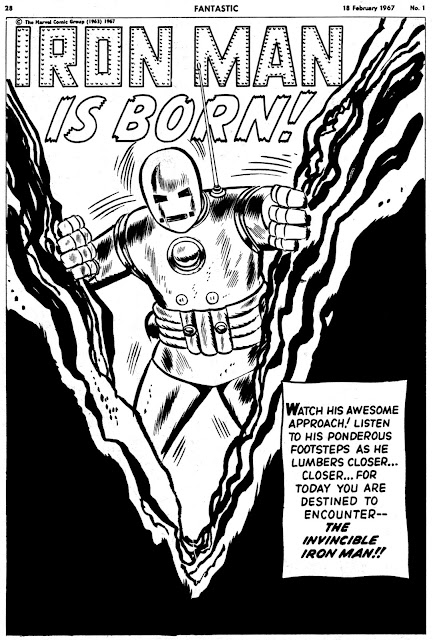 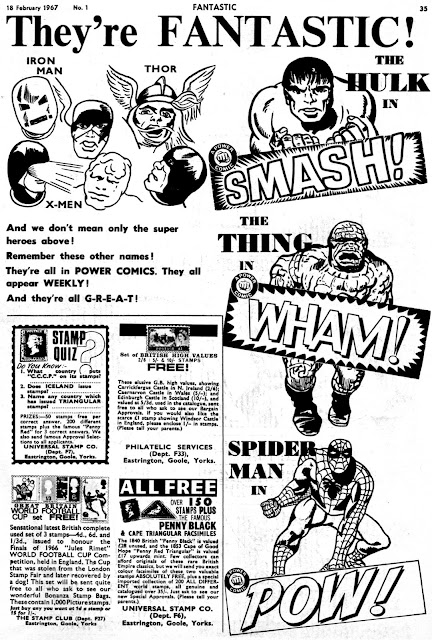 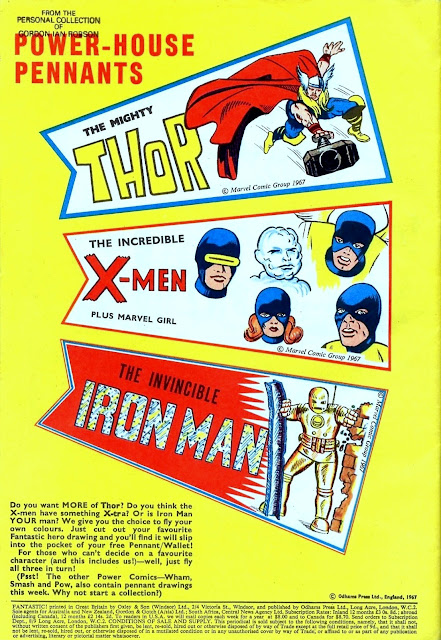 Below, trade and newspaper ads for the comic's launch.
Note that the first one says the comic comes out on Monday
13th February, whereas the second 'says' it's Saturday 11th.  No
wonder kids often missed a new comic, if they were looking for
it two days after it first went on sale.  The comic came out on
a Saturday, not a Monday - despite what the cover said. 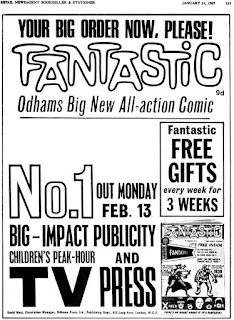 (This is a slightly revised post of one that was first
published on Tuesday, February 1st 2011.)
Posted by Kid at Saturday, February 11, 2017

I never bought "Fantastic" (or Terrific for that matter) as I recall it was a bit pricey at that time for a comic and the strips were not really what I liked as a 6 or 7 year old (preferring UK humour and adventure such as Buster Lion etc). However' like most kids at that time we did get the first 3 issues of "Fantastic" for the free gifts - I clearly remember the free transfers in issue 2 (had no idea what the heck you were to do with the free pennants in issue 1) were not liked by my parents (normally ok with comics etc) - My abiding memory of Fantastic at the time was it was a lot of reading and pretty drab (of course now it looks great to me)

I was 8 when Fantastic first came out, PM, but I didn't buy it 'til #7. Considering you later liked MWOM, I'm a bit surprised that Fantastic didn't appeal to you at the time, but as you say, it was a bit pricey. I did have the chance of buying #3 in Glasgow when it first came out, but decided not to because of the disgusting free gift, which was anathema to me. Sometimes I lay all 89 issues out on the carpet just so I can see all the covers at the same time.

Well , 50 years ago today ( well, it was a Saturday anyway ), I went to Walsall market with our Uncle Albert, ( who incidentally never once started a sentence with ".... During the war...." ) and I was glancing through a copy of this to see what all the fuss was about, after seeing it heavily publicised in Smash and Pow. Uncle Albert immediately bought it for me and once we got back to my Granny's house and I read it, well I just HAD to get this every week!
Anyway, in recent times I have looked for the other 3 Power comics' pennants on the net and found these on EBay and bookmarked the page, if anyone's curious to see what they looked like?
http://www.ebay.co.uk/gds/Power-Comics-Fantastic-Pow-Smash-Wham-Pennants-/10000000011703423/g.html

And I've got all of them, JP. I just couldn't be bothered digging out the comics to scan. Maybe I'll add them later.

I think it was the format on Fantastic etc , there was a heck of a lot of reading in the comic and added to that it was black and white so was not that appealing to me (at least) as a 7 year old. I much preferred the short sports/ adventure etc type stories in UK comics at the time and the humour strips. Added to that I wasn’t that aware of Marvels characters then and was more into the simple colour strips in the DC US comics with mostly simpler storylines. Whams format (and Pow and Smash) were much more to my liking with a mix of superheroes, humour and adventure tales. By the time MWOM came on the scene I had just started high school and was a sophisticated man of the world with a wider pallet of tastes, rather than the impudent imp of child I had been in the “Fantastic” days 

You missed a treat, PM, by not being into Fantastic and Terrific, especially as the former had Luis Bermejo's Johnny Future. However, as far as the Marvel stories go, it was only a delayed treat, as the stories were later reprinted in the Marvel U.K. line. I'm surprised to read that you thought there was a lot of reading in Fantastic 'though, as, despite the higher page count, the pages of Wham!, Smash!, and Pow! were far more packed (on account of there being more panels per page) with content than F and T.