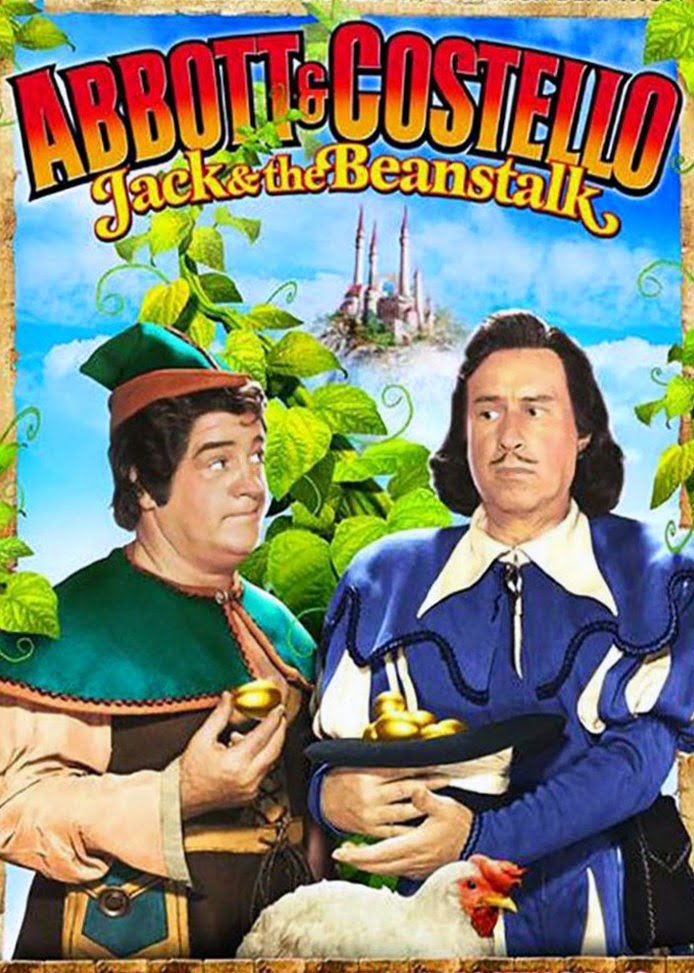 I first saw this particular movie back in 1967 - and again in '68
& '69.  I don't know if I ever saw it from start to finish at one sitting,
but if not, I probably saw the complete movie over the course of those
three yearly broadcasts.  I remember coming in after playing at THOR
(with my home-made hammer) in the field across the road from my
house on one occasion and it had already started (this was probably
in '68) and, remembering that I'd enjoyed it the year before, sat
down in front of the telly and watched it again. 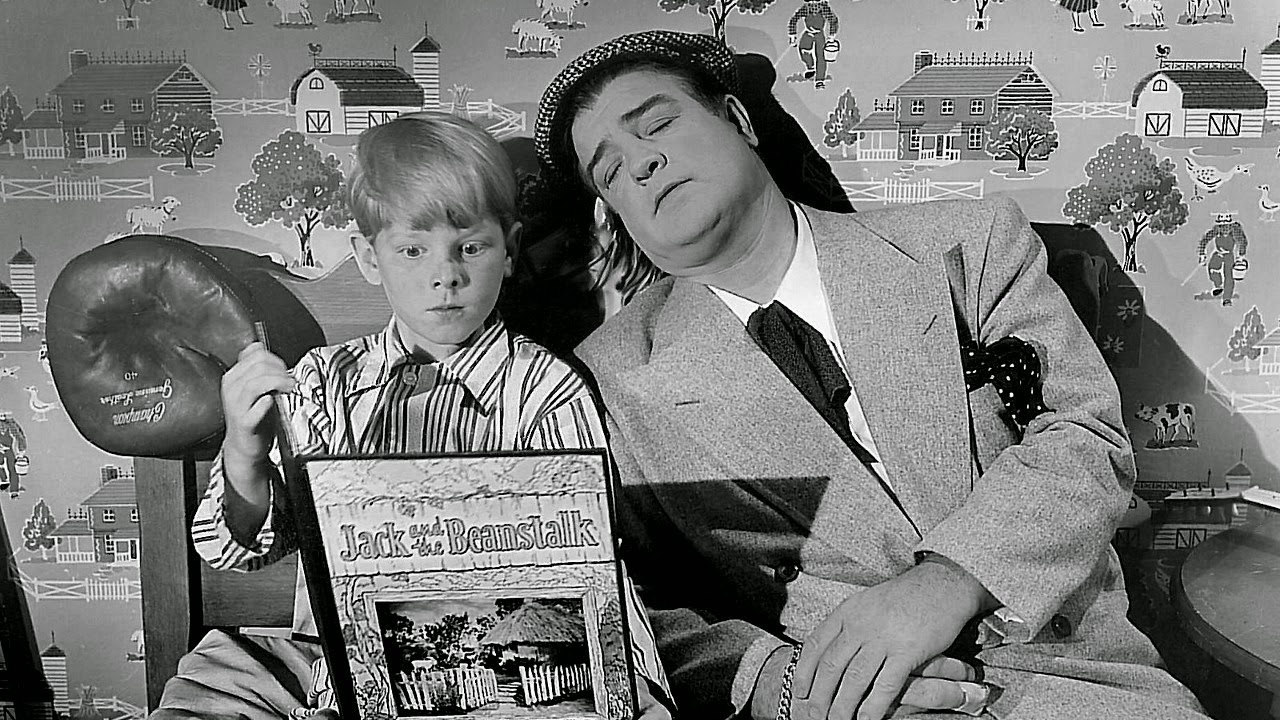 As you can see, the movie was JACK & The BEANSTALK,
starring ABBOTT & COSTELLO (who, at that time, I didn't know
were an iconic double act from years before), and the duo themselves
described it as "one for the kids".  It wasn't until it was shown again in
1989 (the BBC then having just recently re-acquired the rights to show
it again after 20 years) that I discovered it was shot in 'sepia' and
colour, just like The WIZARD Of OZ. 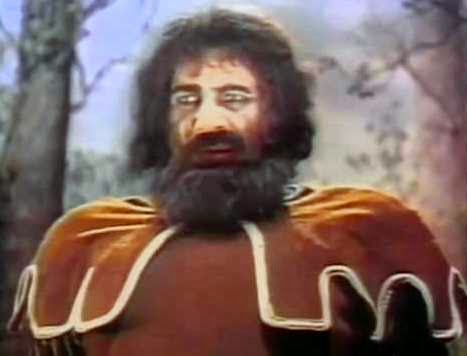 One day, around Christmas of 1970/'71 (I've a feeling it was
Boxing day), I saw the title advertised in the TV listings for that
evening, and made a point of rushing home from the town centre
(where I'd bought a Santa in a sleigh being pulled by reindeer from a
flower shop), only to discover it was the HANNA-BARBERA version
with GENE KELLY.  I watched it anyway, but was disappointed that
it wasn't the one I'd expected.  As I said, I had to wait until 1989
to see the A&C film again, and I now have it on DVD. 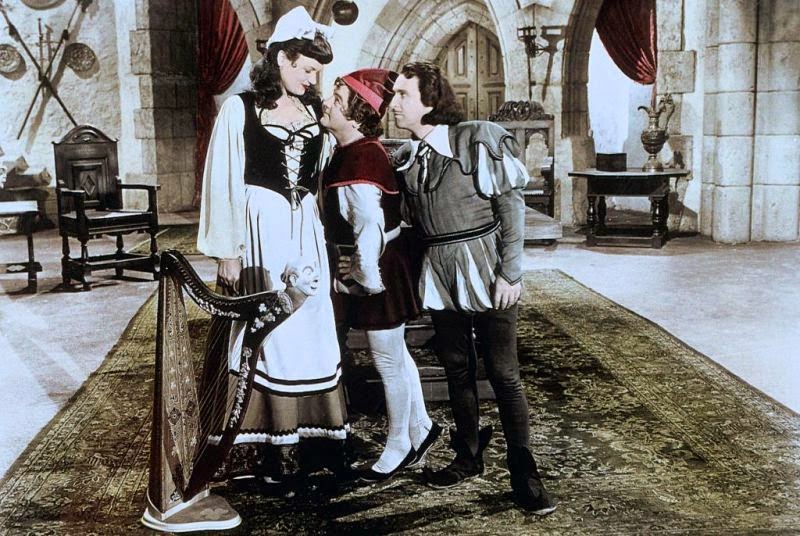 The movie is strictly a 'B' feature I suppose, but is inextricably
linked to my childhood and therefore regarded by myself in a some-
what rose-coloured hue.  It does have some funny moments 'though,
and is an entertaining enough little movie, so give it look-see if it ever
comes on the telly again.  No great insight or behind-the-scenes info
to offer with this post, I'm afraid - it's just a shameless, self-
indulgent exercise in personal nostalgia. 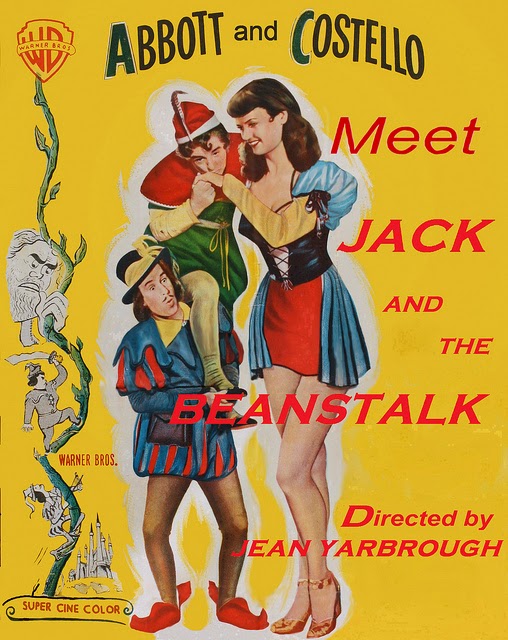 I never really 'got' Abbott & Costello, I'm afraid. I remember their films being on telly occasionally, but I think I had decided pretty early on that they weren't my cup of tea and I mostly gave them a miss. I loved Laurel & Hardy and never tired (and still don't) of watching them, but somehow Lou's antics and Bud as a straight man just never held my attention in the way that L&H or the Marx Brothers did. Just one of those personal things, I guess. There's no accounting for what an individual's going to like.

This BBC Genome thing is great. I was going to mention that I remembered watching Laurel & Hardy's short films at 6pm weeknights on BBC2 back in 1981/82, and sure enough there they are.

I seem to remember a scene in a later Laurel & Hardy movie where a careening jeep sends a troop of soldiers diving into a ditch. Unless I'm wrong, this same scene was also used in an Abbott & Costello movie as well. Some of them are better than others, obviously. The Invisible Man one is quite funny, as is Meets Frankenstein. Bud Abbott seems to have been the equivalent of Sid from Little & Large in the talent department 'though.

I've never seen an Abbott & Costello film at all. I agree with Gey Blabby about Laurel & Hardy though - I bought a DVD of L & H a couple of years ago and they are still terrific. Have you found this film on BBC Genome yet,Kid - I mean in the '60's when you first saw it. It must be there if it was shown on the BBC but it helps to know the date or at least the month when it was shown. I've been reading this blog for about a year and I've seen Gey Blabby's comments often but it was only in the last couple of days I realised he lives in Australia (if it was mentioned before then I missed it but that's typical of me unfortunately). My father's brother emigrated down under in about 1960 but I don't even know if he's still alive - he'd be about 85 now if he is. Since my father died in 1999 I haven't heard a peep from either of his brothers - we weren't a very close family to be honest but my father did get Christmas cards from them however since he's died there's been zero contact.

Nope, but it's a strange one, CJ, in that when I first 'phoned the BBC about it in 1989, they could tell me exactly when it was shown on those three occasions. When, after misplacing the info, I called them again several months later, they couldn't.

Yup, GB lives in Australia, but he was back over in Glasgow for his holidays a few months ago.

I'm in the Laurel & Hardy / Marx Brothers camp too. Did anyone buy the Larry Harman's L&H comic books?

I used to have a little orange record with the theme tune, JP. "When I'm with you and you're with me, then we will never be individually..."

Kid's blog gets around, CJ.
Your uncle was probably one of the Ten Pound Poms, although it might've cost a bit more by the time he came down.

Don't know if I've understood you correctly about this film, Kid: Did you find it on BBC Genome?
I've got two entries for it showing up - one from Boxing Day 1965, the other from 16 July 1967, which sounds like one of the ones you saw.

In the US, this film was Public Domain fodder for decades on TV and home video.
http://www.filmthreat.com/features/1157/

Chris, that'll explain the appalling quality of the early DVD releases of the movie. Some were so bad that the colour segment looked like it was in washed out b&w. Ta for the link.

It looked really bad in the 80's when it all seemed to be sourced from the same duplicate print that was passed around from dealer to dealer.

I saw it years later on TCM and was impressed at how good it looked versus the crappy Goodtimes VHS tape I had of it as a kid. I see the version up over at archive.org seems to be the same version I saw on TCM and that's probably the best it'll ever look.

Oddly it hasn't received a "Warner Archives" release over here, but another film produced around the same time did.
http://shop.warnerarchive.com/product/abbott+and+costello+meet+captain+kidd+1000205102.do?sortby=ourPicks&refType=&from=Search

It was released in the U.K. on video (and later, DVD) back in the early 2000s by a company called Orbit, Chris, and the quality was excellent. I think it's now available on a digitally remastered and HD disc, but I'm not sure by whom.