IT'S THE MARVEL OF THE AGE - CECIL COLEMAN SUPERCAR... 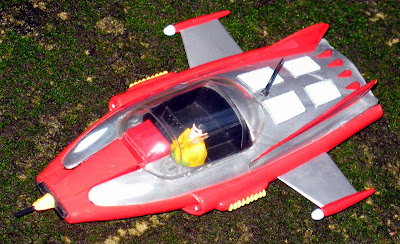 Take a look at the little beauty in the accompanying photographs.  It's only yer actual CECIL COLEMAN toy SUPERCAR from the 1960s - wow!  I've had this for quite a number of years now, but it took me even longer to acquire from when I first saw this imitation BUDGIE TOYS plaything back when I was a mere kidlet.  (The flash has wiped out some colour and detail, but you get the picture - pun intended.)

Talking of Budgie Toys, I actually owned one of their diecast Supercars for half an hour or so (might've been a wee bit longer) way back in 1965.  I'd swapped a red toy yacht and a water pistol with a boy around the corner (BILLY THOMSON* if I recall correctly) for his rather beat-up "marvel of the age" - only to soon change my mind when I realized it was on the verge of falling to bits.  He was somewhat reluctant to swap back, but I 'insisted'.  (*Funnily enough, we'd lived next to another Billy Thomson in our previous house just a few minutes up the road.) 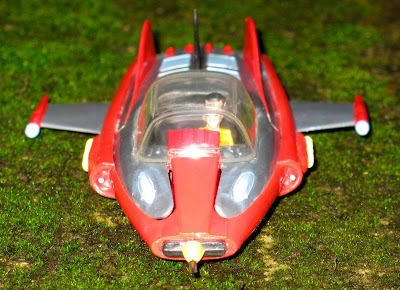 Regarding the Cecil Coleman version however, I first saw this toy circa 1966 or '67 in my local SAFEWAY store, hanging on an end-of-aisle display, whilst being dragged around the shops by my mother.  If I recall correctly, it was only 2'6d, but, despite my pleas, I came away empty-handed.  A couple of years later, I saw another one on a stall in Glasgow's famous BARROWLAND market ('The Barras'), but again (even though it was only 1'9d this time) my earnest entreaties fell on deaf ears.

Cut to around thirty years later when I saw one advertised for £350 in a collectors mag.  I had to have it, of course, so promptly stumped up the admittedly overpriced amount, even by then-current standards.  (I bought it from a well-known seller who tends to charge on the extreme side compared to other dealers.)  What can I say? These toys are as rare as hens' teeth and it's only money.

It came in a card-backed blister-pack, with plastic figures of MIKE MERCURY, PROFESSOR POPKISS, Dr. BEAKER, JIMMY (not the one from The Krankies), and MITCH The MONKEY.  I'll show them another time, as they're tucked away somewhere at the moment.  (And I want to repaint them the figures to a higher standard first.)

It must be admitted that dear ol' Cecil's Supercar is a rather flimsy, underwhelming vehicle in the cold light of day, compared to how I remembered it from my childhood.  Then, it seemed like a plaything of unlimited possibilities;  in reality, it's a two-colour, fragile affair that looks as if it might fall apart if someone breathes too hard in its vicinity.

Now, I have to admit that I've got quite a few items in my collection for which I've paid rather steep prices, but I don't buy collectables to cash in at a future date when they've increased in value.  I purchase things merely because I want them, and I don't mind bringing an item up to my rather high standards if I consider it can stand improving.  I'm lucky in being able to repaint things to a far higher specification than when they were originally issued.

Case in point: when I acquired my excellent STEVE ZODIAC and ZOONY on a JETMOBILE toy by GOLDEN GATE, Steve's body wasn't glued together properly, leaving a one millimetre gap between the two parts.  Also, his hands weren't painted, and the seat of the jetmobile wasn't fitted properly.  They are now, and the overall look has been vastly improved since it came into my possession.
﻿﻿
Same with my Supercar.  Previously, it boasted a mere two colours - red and silver, and was rather boring to look at.  Now, with a bit of 'detailing', it looks far more substantial than it actually is.  Some collectors would regard my 'improvements' as sacrilege, but, as I said, the monetary potential in the collectors' market is of no interest to me;  all I'm concerned with is an item looking as good as it possibly can.

And doesn't my Supercar look brilliant?!
Posted by Kid at Saturday, December 29, 2012