Since The BEANO was 'relaunched' a few weeks ago, it's actually
been quite funny at times, with a level of humour seemingly aimed at
a wider age group, as opposed to the rather infantile kind purveyed to
its readers over the last several years.  Maybe I'm imagining it of course,
but the comic seems to have upped its game and, all in all, is a nice little
package these days.  Saying that, I hadn't picked it up in ages before
its 'new look', so perhaps it had already moved in that direction.

And so to the Christmas edition:  £3.99, eight extra pages, and the
usual pack of tat you could probably buy three-for-a-quid in a pound
shop.  Why do they bother with this infuriating practice?  I'm sure even
the most easily amused children would find it difficult to generate much
enthusiasm for the rubbish contained within the bag the comic comes in.
If DCT are going to charge its readers twice the usual price, then give
them twice the usual content.  A double-sized issue would have gone
down a lot better than a pile of junk which will be lost, broken or
discarded within a half-hour or so of opening. 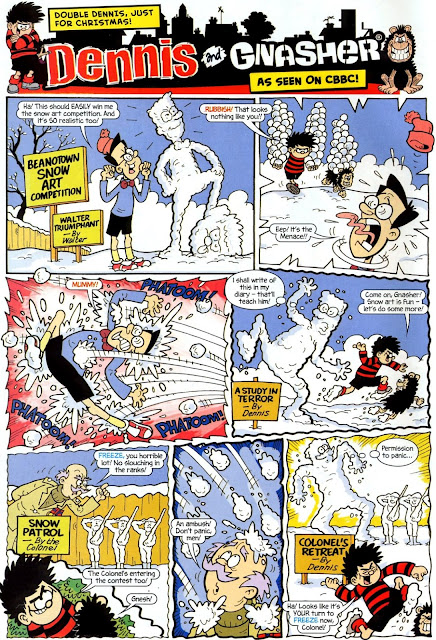 Imagine a 72 page bumper Christmas Special, jam-packed with all
your favourite strips to read at your leisure over the Yuletide period.
Sounds good to me, how about you?  Remember, you can currently buy
the hard-backed BEANO Annual for 2013 for around £3 or less, so
given the choice, what would you spend your money on?

Inside, the contents are well-drawn for the most part, and even the
normally underwhelming art of a former DESPERATE DAN cartoonist
is less annoying than usual, although his interpretation of ROGER The
DODGER is unconvincing and he still shouldn't be allowed to do his own
lettering.  Let's just hope the appointment of former DANDY Ed to that of
Beano editor doesn't presage the appearance of further strips by this par-
ticular artist and his ilk, otherwise I'm off.  Anyway, his puzzle pages are
easy to ignore amongst actual comic strips by more accomplished
artists, and don't prove to be too much of a distraction. 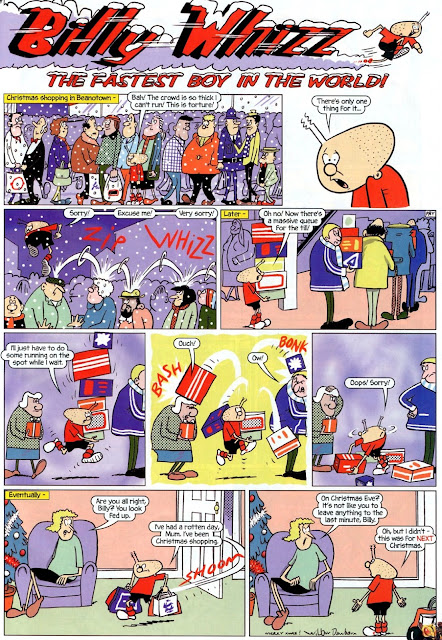 The FUNSIZE FUNNIES strips would benefit from being half-
pages each, instead of singlel tiers, as it'd give the writers and artists
more to work with.  These kind of strips are okay for newspapers, but
they seem a bit of a wasted opportunity in a weekly comic.  Hopefully,
those in charge will see the benefit of such an idea and institute
some half-page strips in the future.


The comic actually looks more 'Christmassy' in its bagged state, as
a few snowballs adorn the cover that way.  However, I miss the days
when the look of freshly-fallen snow graced a comic's logo.  Christmas
Editions somehow don't seem complete without such a long-estab-
lished nod to the traditions of the Season. 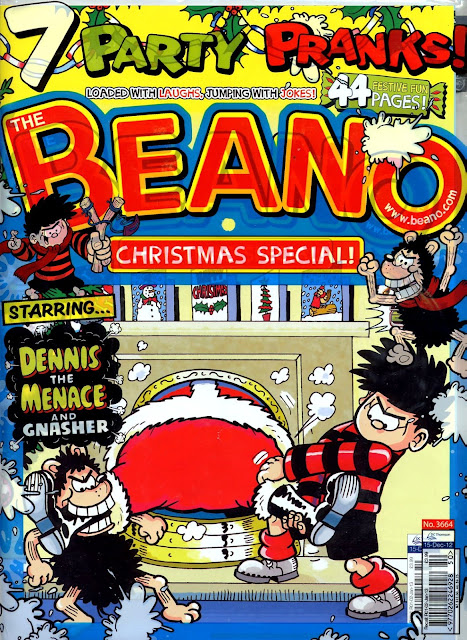 The Verdict?  Overpriced at just short of four quid.  £2.99 would've
been a more reasonable figure, but that apart, worth buying - even if
only to support the last original U.K. humour comic on the market.

Agree?  Disagree?  Not sure?  Just want to see your name in print?
Feel free to share your thoughts in the comments section.
Posted by Kid at Sunday, December 16, 2012

NO. Is J*mie Sm*rt drawing Roger the Dodger? Seriously? Well, so long, Beano, it was nice knowing you...

Don't worry - it's only a puzzle page featuring (a six year-old) Roger. The REAL Roger's strip is in the issue as well.

Kid , hate to break it to you but Roger's not real.

Rubbish! Next you'll be telling me that there's no such person as Santa.